Biography and History of Scotland The What? Comedy Team with cast members and how they got together and went on to entertain Aberdonians and the people of Scotland for over 25 years


Scotland The What? Edinburgh Fringe


Scotland The What were a trio of Aberdonians, Stephen (sometimes called Steve) Robertson, William "Buff" Hardie and George Donald, who entertained Aberdeen and Scotland with their range of comedy sketches and funny songs. They met whilst studying at Aberdeen University through the production of student shows and Aberdeen Revue Group activities from the 1950s. When the Aberdeen Revue Group stopped at The Arts Centre in 1967 the trio, with their friend James Logan as producer, continued their unique comedy much to the mirth and delight of many an Aberdonian.

Scotland The What Book

Scotland the What?: An Inside Story and Personal Memories

is a new Scotland The What? book by Steven Robertson full of personal memories , stories and photos of Aberdeen's favourite comedy trio

Scotland The What? Aberdeen


Scotland The What? shot to fame at the Edinburgh fringe festival in 1969 and toured Scotland entertaining folk with their unique brand of Doric humour using the Doric Dialect in their comedy sketches. Much of their material was taken from everyday events and Scottish life.


They were seen by His Majesty's Theatre owner and manager James Donald who booked their act for a weekend performance in 1971 - a local legend was born! The show was so popular amongst locals that a third evening had to be hastily booked. The trio returned regularly to HMT Aberdeen and other venues throughout Scotland. Their fame rose and they were soon performing in England at The Duke of York Theatre in 1975, The Queen Elizabeth Hall in 1985 and Bloomsbury Theatre, London in 1987.

The trio, or The Boys, as they are still known (though now in their 70s!) by Aberdonians were so successful that they gave up their day jobs to perform full time. At the time Steve Robertson was a lawyer, William Buff was the Secretary of the North East Hospital Board and George Donald was a teacher.

For over 25 years the trio won the hearts of Scottish folk, appearing live in many cities and towns and producing some funny videos and performances whilst dressed in dinner jackets and suits.

The producers and drirectors of Scotland The What? were James Logan, who called the cast "The Boys" from their early days in 1967 through to 1993. Grampian Television producer Alan Franchi. Director James Logan died in 1993 and was honoured by The Boys during their Freedom of Aberdeen ceremony in 2008.

Scotland The What? were a superstitious trio and would perform a ritual handshake to each other at the side of the stage just before each performance. This ritual was probably more of a way to become focused upon their act and no doubt helped many a performance. 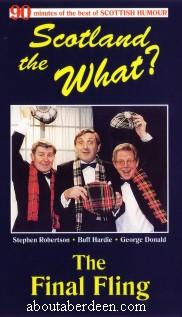 In 1994 each member of Scotland The What? were awarded an Honorary Masters Degree from the University of Aberdeen on 26 November 1994.

In 1995 they retired from touring with their comedy routine. The last performance of Scotland The What? was saved for their home town of Aberdeen at His Majesty's Theatre on the 25 November 1995. The show was aptly called The Final Fling

All three members of Scotland The What? were awarded MBE's by the Queen in 1995 from her Birthday Honours List.

When Sir Alex Ferguson was given the Freedom of Aberdeen City in 1999 Scotland The What? came out of retirement and gave a private performance to the Dons manager.

Buff Hardie's son continues the family comedy connections by writing for Aberdeen comedy group The Flying Pigs and giving after dinner speeches. He is also a Member of the Board of the Aberdeen Performing Arts Trust.

George Donald is the Director of the Deeside Festival. He asked his pals back for an onstage chat show in 2005.

On Friday and Saturday 30 and 31 March 2007 Steve Robertson came out of retirement (again!) to perform in the 750th anniversary of the Aberdeen Grammar School celebrations at His Majesty's Theatre. This was his old school and the evening events were attended by many former and current pupils and teachers. Steve Robertson was joined on stage by current members of the Aberdeen Grammar School, Craig Pike of The Flying Pigs, Graeme Wilson, Jimmy Reith and Laura Jarret. Together they performed Scotland The What? and The Flying Pigs sketches. The performances were called Bon Accord An Aberdeen Grammar School Celebration.

In 2007 Aberdeen Labour Councillor Ramsay Milne suggested granting Scotland The What? the freedom of Aberdeen City because of their years of entertaining Aberdeenshire audiences and promoting the Doric dialect.

On the 25 April 2007 Councillors from the different parties in Aberdeen unanimously backed the motion to give the Freedom of Aberdeen City to Scotland the What?

They join an esteemed group to be given this highest honour of Aberdeen City which includes Mikhail Gorbachev, Sir Alex Ferguson, Nelson Mandela and Sir Winston Churchill.

Freedom of the City Aberdeen

Scotland The What were given the Freedom of the City for Aberdeen during a weekend of celebration during Saturday 19 and Sunday 20 April 2008. There was a special performance at His Majesty's Theatre, Aberdeen for the much loved trio of Buff Hardie, Steve Robertson and George Donald. This included a performance by the comedy group The Flying Pigs and clips from Scotland the What? One of the Flying Pigs members is John Hardie, the son of Buff, who continues the family tradition of Doric comedy. Tickets to the Freedom of the City celebrations for Scotland the What? were free and given on a first come first served basis. An entry form was available in the Evening Express newspaper. The Freedom of the City of Aberdeen ceremonies are usually held in The Music Hall but because Scotland the What? have had such a long association with His Majesty's Theatre it was held at HMT in their honour.

When asked about his appointment Stephen Robertson said: 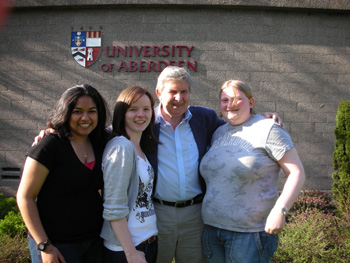 In 1992 Buff Hardie and his wife, Margaret, founded the charity fund raising annual event the Wags Dinner. During the charity dinner, held at a top Aberdeen hotel, four guest speakers compete to become the funniest Wag of the evening.

The 2007 Wags Dinner was held at Ardoe House Hotel and the guest speakers were Alex Fleming, Doug Duthie, Eric Davidson and Mark Stephen. £35,500 was raised for the charity Quarriers which is an epilepsy fieldwork service throughout Aberdeenshire.

Scotland the What? became much in demand celebrities in the Aberdeenshire area. For example in 1988 Steve Robertson and Buff Hardie opened the new fashion floor at Esslemont and Macintosh. They cut a giant ribbon with a huge pair of scissors. They were accompanied by Harold Esslemont, Bernie Esslemont, joint managing director Norman Esslemont and sales manager Karin Swinney.