Information about the New Deer Wizard Festival with performers and campsite facilities:

Click here to book a ticket to the Wizard Festival at New Deer in Aberdeenshire.

The first Wizard Festival at New Deer between Ellon and Peterhead in Aberdeenshire took place on the 24 and 25 August 2007. It was described as a magical music festival and an Aberdonian Glastonbury and featured some top bands, musicians and groups. There were two stages, set amongst the stunning Buchan countryside, playing back to back live music on the Friday and Saturday under cover.


The Wizard Festival continues each summer and visitors can bring their tent or camper van and camp out at the location which is a 50 acre showground at Craigford Park. There will also be a large car park for day visitors.

Other Wizard Festival 2011 line up acts now include The Magic Numbers, The Twang, Tommy Reilly, Adrian Edmondson and the Bad Shepherds


Details of the Wizard Festival 2012 will be added soon.

The first confirmed act for The Wizard Festival 2010 is The Happy Mondays who will perform on Saturday 28 August.

Wizard 2009 was the third Wizard Festival to be held in New Deer and took place during the August bank holiday weekend of Friday 28 and Saturday 29 August. Despite the bad weather of rain and high winds festival goers had a great time with over 5000 attending Wizard Festival 09. Tickets for the Wizard Festival 2010 will be available via Ticketmaster. Children aged twelve and under go free if accompanied by an adult. 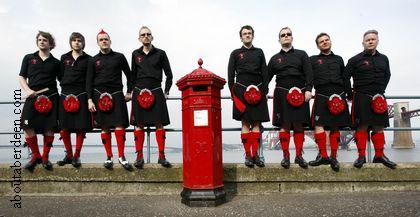 Pictured above are the Red Hot Chilli Pipers who will be playing on Friday Aug 28 2009.

The Levellers will be headlining the main stage, the Voodoo stage, on Friday August 28 and will be supported on the main stage by the contagious rhythms of The Beat.

On Saturday, on the main stage which is called the Voodoo stage, The Charlatans will entertain festival goers. Other confirmed acts at Wizard Festival New Dear 2009 include Indie music group The Buzzcocks, Twisted Wheel, Luva Ana and The Ray Summers. More information to follow though please read previous year's info for facilities, etc. 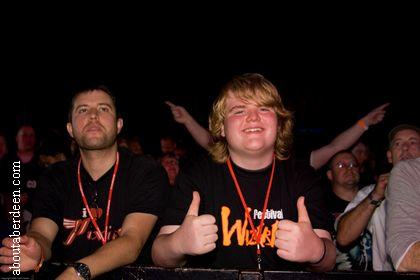 Idlewild will perform on the main stage of the Wizard Festival on Friday August 28.

The compere for the 2009 Wizard Festival is Scottish DJ Vic Galloway who performs on BBC Radio 1 and BBC Radio Scotland.

Other confirmed acts for Wizard Festival 2009 include Proud Mary, The Cuban Brothers, King Voodoo and Celtallica.

Other Wizard Festival events will take place throughout the North East of Scotland and this includes showcase events at The Lemon Tree on July 18, Aug 1 and 15 and during the Peterhead Scottish Week at Mambos and The Lido Marquee at Peterhead on July 23, 24 and 25.

The line up for the Wizard festival 2008 include the Indie iconic band Supergrass who will perform tracks from their new album Diamond Hoo Ha. Joining Supergrass are the punk band The Damned, Alabama 3, The Cinematics, Logan and Chris Helme. Other confirmed acts include McCusker/Drever/Woomble (Idlewild), Proud Mary, Dreadzone, Parka, The Amigos and Flood Of Red. Other confirmed acts include Mark Morris, the Celtic funk band Celtallica, DJ Andy Duguid and The Kazoo Funk Orchestra. Other Scottish bands at Wizard include The Dykeenies, The Peatbog Faeries, MacFloyd, The Haze, Honey Ryder, Kyte, Edgar Prais and The Xcerts.

The compere for the Wizard Festival 2008 will be Tom Morton the BBC Radio Scotland broadcaster, writer and musician. Tom Morton will host the Voodoo main stage and the Evening Express Freedom stage. During this time Tom Morton will also perform some of his own original material. 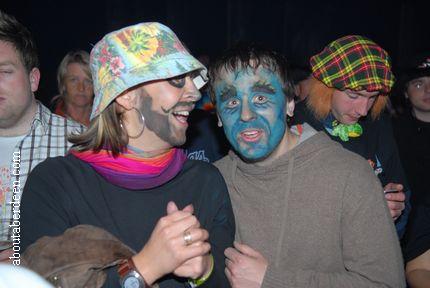 For the 2008 Wizard Festival there will be a limited amount of caravan space available. Local magicians, Allans Magic and their 7 feet tall pet rabbit will open the special wee wizards event for the children . Allans Magic recently won the 2008 Scottish Children’s Entertainers of the Year Award. Read more about Allans Magic Other entertainment for children during the Wizard festival 08 will include face painting, storytelling, a bucking bronco, a climbing wall and a bouncy castle. 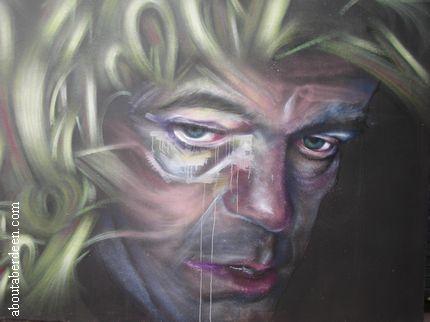 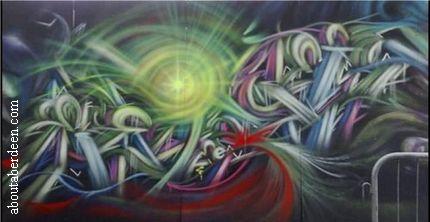 Alabama 3 will be performing on the main stage, the Voodoo Stage. TV viewers of The Sopranos will recognise Alabama 3 from the theme tune Woke up this morning

Chris Helme is the former front man of the Seahorses and has performed The Yards and will be performing his solo act at The Wizard Festival.

Leading up to the Wizard Festival 2008 will be a number of Wizard Fringe events throughout Aberdeen and the Shire. For example on Saturday 16 August Banshee stage acts The Underkills, Velvet Audio and Bundy will perform live at the Country Inn Park in Mintlaw, Aberdeenshire. Then on Thursday 21 August another Wizard Fringe event will take place at Beluga Bar on Union Street Aberdeen City with Lady Mercedes, Gunslinger and Kashmir Red performing live music.

The Happy Bus will transport concert goers from Dundee, Dunfermline, Edinburgh, Glasgow, Perth and Stirling to the Wizard festival in New Deer near Ellon. The Happy Bus will be operated by Aberdeenshire company Stagecoach which will also run a bus from the Wizard Festival site main entrance to Aberdeen bus station on Sunday 24th August at 11am. These special bus tickets cost £5 and tickets can be bought from the Wizard Festival box office or seat on the Happy Bus can be booked online at the www.happybus.com or www.stagecoachbus.com websites.


Battle of the Bands Night 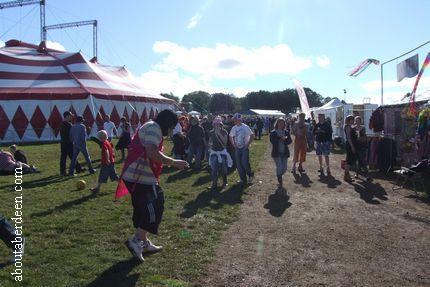 The Wizard festival will also showcase many local bands and musical performers.

The main stage is called Voodoo whilst the supporting stage goes by the name of Banshee.

Rent a Tipi or Yurt

Rent a Tipi or Yurt at the Wizard Festival from Hearthworks the renowned tipi and yurt supplier. They include a reception area, separate toilets and be erected and ready for you to move in and make your outdoors home more fun and comfortable whilst enjoying the love music and entertainment. These tipis and yurts can be pre booked by Wizard festival goers. Each tipi or yurt for rent can sleep up to 15 people and are perfect for families or a group of friends. To make your tipi stay more comfortable Hearthworks can also supply chairs, a table. rugs and a stove. Rent a tipi or yurt from www.hearthworks.co.uk or via wizardfestival.com


Children aged under 12 years will get free entry to the Wizard Festival 2008 when accompanied by an adult. There is a large children's area with entertainment such as puppetry, face painting, climbing walls, fairground rides and other kids activities.

Roy Thain, an experienced musician and musical promoter is the creative mind and energy behind the Wizard Festival at Craigford Park in New Deer. Roy is an Aberdeenshire loon born and bred and has always dreamt of hosting a music festival in Buchan. Roy says:

It couldn’t have been anywhere else really. It’s my home and a place I feel most passionate about. The area has seen music events come and go over the years. I wanted to create a festival, with a mixture of new and existing sounds, which would be here in ten, twenty maybe thirty years or more. It’s important locals have something to feel proud of and someplace they can go to relax, have a wicked time and ultimately take the whole family to. We hope to tick all those boxes.

More information with photographs can be found at the official Wizard Festival website at www.wizardfestival.com and there is various merchandise like Wizard festival t-shirts that will be on sale soon at their site.


Tickets for the Wizard Festival


A weekend ticket for the Wizard Festival is available now at £55 which includes free camping and car parking. A ticket to the Wizard festival can be purchased locally at the following shops and bars. Some of these outlets may charge a small booking fee.


Tickets for the Wizard Festival at New deer can also be purchased online from Tickets Scotland via their website at www.tickets-scotland.com

There are 3000 tickets available for the 2007 Wizard Festival.


Local Acts At The Wizard Festival


Local acts at The Wizard festivals include singers and groups from the Buchan area of Peterhead, Ellon, New Deer and Aberdeen City. They will be performing in a giant tipi on Friday 24 and Saturday 25 August 2007 at Cragieford Park, New Deer.
These include the Under Kills, Emma Foreman & Dusty Valentino, Grant Davidson, Liars Dice, Headlight, Toy, The Citrus Theory, Devil Train, Gerry Jablonski, Eskimo Blonde, The Resolutes, Bundy and Headlight. These local bands and solo artists are to perform during the day. In the evening and during the night there will be relaxing reggae riffs played in the tipi.

We have been literally hounded for our local line up from day one, so we’re very excited to have it out there and see the response from people. Hopefully they’ll be excited too when they see who is playing.
There was no question about having local artists performing at Wizard. It’s always been something we felt quite strongly about. We want Wizard Festival to be something that people in north east can be proud of. I really hope we achieve something wonderful up here and something that sticks around for a good few years.

A great way to enjoy the Wizard Festival and have some outdoors comfort is to have a Tipi holiday in Scotland. The Wizard Festival organisers have made this much easier by arranging tipi hire in Aberdeenshire with Hummingbird Tipis from the company lassanatipis. These 20 feet tipis, like that in the tipi photograph to the left, are much like the Native Indian dwellings and is an ideal way to enjoy live music under the mystical northern sky in the heart of Scotland’s North East Highlands. Just like the Indians would have done the tipis will be erected in a 20 based village by the canvas masters, HummingbirdTipis who are experts in their fields having supplied big name festivals such as The Big Chill, Greenman and Bloom Festivals.

In addition the Wizard Festival organisers will have a giant tipi where visitors can enjoy reggae and acoustic sounds and debut performances from local bands on the Friday and Saturday.

The tipi holidays in Scotland at the Wizard Festival are expected to be very popular and early booking is recommended via the wizardfestival website at www.wizardfestival.com or by contacting Merle and Ian directly at www.hummingbird_tipis.com