museums
parks
dining
hotels
attractions
Follow us...
Home  >  Ghosts of Aberdeen and Scotland  >  Where To Find Or Watch A Medium Psychic In Aberdee

Where To Find Or Watch A Medium Psychic In Aberdeen

Psychics Clairvoyants and Mediums In Aberdeenshire and how to contact them and where to see them: 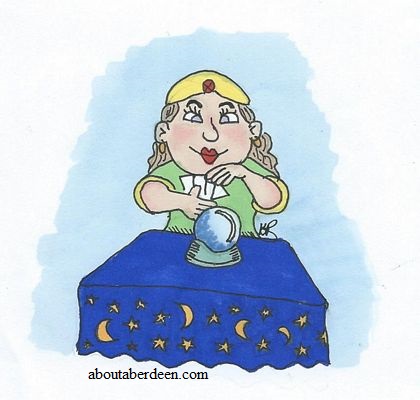 
Medium Derek Acorah appears at the AECC most years. He is next performing on the 23rd and 24th of February 2006 with his show The Mystic World of Derek Acorah. His 2005 and 2004 shows were sell outs, so buy your tickets early.

Derek Acorah is a World famous clairvoyant and spirit medium who regularly appears on TV and Radio. His programmes include Most Haunted and Antiques Ghost Show on Living TV. He uses his supernatural abilities to captivate and entertain along with his spirit guide Sam.

of Derek's books, DVDs, videos and Derek's latest book with free delivery available when you buy at discounted prices.


Details about the Aberdeen Exhibition and Conference Centre. Book a ticket.


To visit the official website of Derek Acorah see www.derekacorah.org which has photos and pictures of Derek, his biography, work, his spirit guide Sam, his books such as The Psychic World of Derek and Ghost Hunting with Derek Acorah and where to purchase them, his letters page and a photographs gallery of his shows.
His site is interactive and allows you to do things like interpret which colour you are today and what it means and there are explanations of crystals, tarot cards and runes and their powers.
Derek can undertake healings by e-mail in his absent healing section. There is also a guestbook where you can leave Derek a message and a question and answer section.
Other helpful pages include advice about meditation, how to find out if your pet is psychic, aura information and chow to sense it and the colours and bereavement advice.
The tour dates and live shows section lists where and when Derek Acorah will be appearing throughout the UK and his Scotland venues.

Derek has worked on many television programmes and these are described on his website. Such series include Living TV: Most Haunted, Granada Breeze: Predictions with Derek Acorah and Living TV: Antiques Ghost Show. This has taken him to investigate Scottish places such as Craigmiller Castle near Edinburgh and The Vaults in Edinburgh city centre.