Information about the ghost of Jenny Miller and her stones at Wanlockhead near Leadhills, Scotland 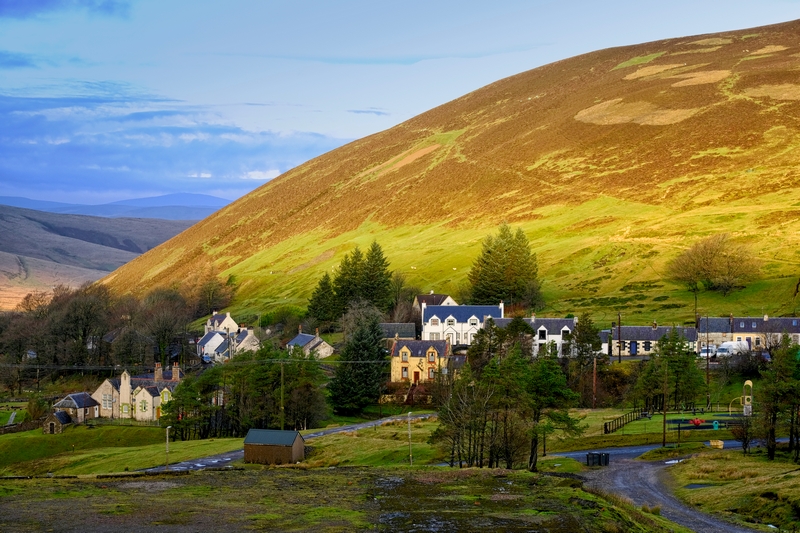 Wanlockhead, the highest village in Scotland, used to have a coal pit and mine and where the pits used to be situated is the Museum of Lead Mining in Wanlockhead. The area is steeped in history. For example Scottish poet Robert Burns had the shoes of his horse shod at the mine Blacksmith when he was there collecting taxes in his day job as a Customs Excise Officer.

The museum is home to many curious and historic objects. One such curiosity are two broken pieces of stones. When they are put together they form the name Jenny Miller.


The story of Jenny Miller and her stones is a sad tale. She worked in a nearby farm and in the year 1877 she was walking along the hills on her way to her sister's wedding which was taking place in the village of Wanlockhead. She had changed into her Sunday best dress and carried a marriage gift for her sister and husband in a wicker basket.
As she walked along a blizzard suddenly started and Jenny Miller bravely battled through the fierce wind and snow. Unfortunately the atrocious weather limited her vision and Jenny fell into the mine workings. Her body was not found for several days.
The locals were saddened by her tragic death and built a stone cairn near where she died in this tragic accident. On one of the pieces of stone someone carved
"In memoriam, Jenny Miller"

One hundred years later a Sunday Post reporter heard a story from a tourist who was out walking amongst the hills of the nearby village Leadhills. The walker was out alone when suddenly a heavy Scottish mist came down. At the same time a young woman dressed in old fashioned clothes, carrying a wicker basket appeared out of no-where.
She said to the lone walker:

"Look in the stones".

The lone hill walker described her voice as being in distress and after she spoke the words she disappeared into the mist. At this point, despite the mist, he turned around and ran back to Leadhills where he told what had happened to him.


Later he went looking for the cairn and when he found the stone cairn laid in memory of Jenny Miller he found no memorial stone. When he was there the tourist remembered what the ghost had said to him and he searched amongst the cairn until he found the memorial stone of her name which was now in two pieces.

The stone can now be seen in the Museum of Lead Mining in Wanlockhead. There are occasion sightings of the ghost of Jenny Miller and ghost hunters believe she will not rest until her cairn is rebuilt and the memorial stone repaired and returned to the cairn. Others believe she will continue her hauntings to safely guide lost hill walkers or those caught in the Scots mists to save them falling and being killed.