Biography of the Famous Fraserburgh and Aberdeen man who moved to Japan invented and helped the Samurai to overthrow their military leader, the Shogun. Thomas Blake Glover built warships for the Japanese, developed the company Mitsubishi and was awarded the Order of the Rising Sun. Thomas Glover became known as The Scottish Samurai 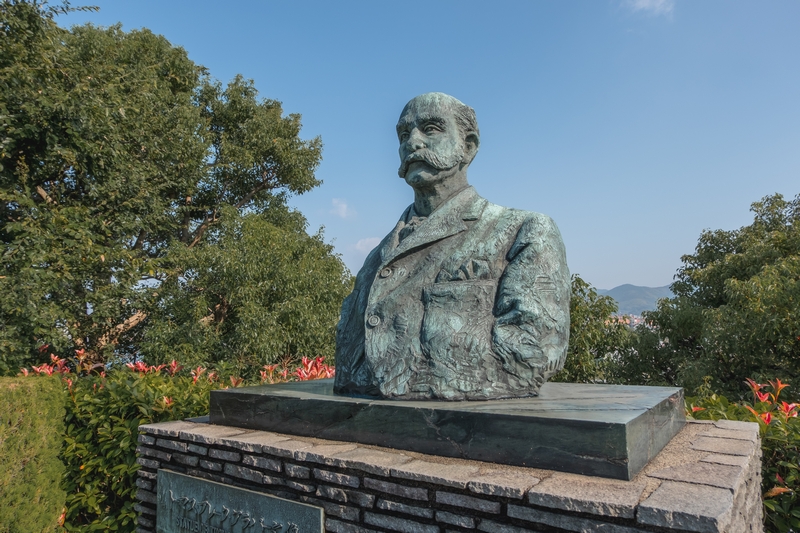 Thomas Blake Glover was born in Fraserburgh on the 6th of June 1838. For the first six years of his life he lived at number 15 Commerce Street in Fraserburgh. His father was the chief coastguard in Fraserburgh, he was English and his mother was A Scot from Fordyce, Banffshire. His father was formerly an Officer in the Royal Navy. Thomas Blake Glover had 6 brothers and a sister. The house no longer remains because it was destroyed after a bombing by the German Luftwaffe Air Force during World War 2.

In 1851 the family moved to a Victorian Home in Bridge of Don in Aberdeen. They lived at 79 Balgownie Road.


Upon leaving school Thomas Blake Glover started work for a trading company and was soon travelling the World, becoming a successful trader in weapons and ships. His travels took him to Japan with one of his brothers when they both worked for the tea merchant Jardine, Matheson & Co. during the late 1850s and early 1860s. In 1861 Thomas Glover formed his own trading company. He lived in Nagasaki where in 1863 he built a house on the Minami Yamate hillside which overlooks Nagasaki Harbour. This still remains as the oldest Western style building in Japan. Over 2 million people visit it each year. It is known as Glover House and boasts a stunning garden. It is Japan's top tourist attraction.


During his time in Japan Thomas Glover achieved a great deal. He helped the Samurai to overthrow their military leader, the Shogun. This action helped to restore The Emperor to his throne. This earned Glover the nicknames The Broch Samurai and The Scottish Samurai.


Thomas Glover was also a key part in the industrialisation of Japan. After commissioning three warships to be built at Aberdeen shipyards (including the Jho Sho Maru which was their first iron-clad warship) for the Japanese Navy he formed his own shipbuilding company. This developed into the company Mitsubishi after his bankruptcy in 1870. He remained in the company as a Consultant. He also introduced the first trains to Japan and the first mechanised coal mine. He owned the Takashima Coal Mine and helped found the Kirin Beer Company.

Along with other foreign residents they built and funded the Trinity Episcopal Cathedral at the Minami Yamate hillside in 1862.


Thomas Blake Glover married Tsura, the daughter of a Samurai, in 1867. The couple are thought to have inspired John Luther Long to write the story that Puccini later based the Opera Madame Butterfly based on. Tsura often wore a butterfly emblem on her clothes. They had two children called Hana and Tomisaburo, who was nicknamed Tommy by his father. Read more information about Madame Butterfly.

He was the first non Japanese citizen to be awarded the Order of the Rising Sun, one of the highest honours of the Country.


There is a yearly award called the Thomas Blake Glover Scholarship which goes to a Nagasaki University student one year and a Fraserburgh student the next year. Each student has the opportunity to visit the other Country to give them a taste of the culture and hospitality of Nagasaki and Fraserburgh.


Author and Professor of Creative Writing at Aberdeen University, Alan Spence, has written a book called The Pure Land which is a fictionalised and factual account of the life of Thomas Blake Glover, The Broch Scottish Samurai. Chapters include his life story in Fraserburgh and Aberdeen and then continue with his adventures in Japan. The book can be ordered from Amazon

and free delivery is available. Alan Spence was Scottish writer of the year in 1995.


Glover House, the family home of Thomas Blake Glover who was nicknamed the Scottish Samurai, and a fine example of a Scottish Victorian House used to be open each summer and at certain times throughout the year. It is now shut to the public.

On Thursday 15 December 2011 the life of Thomas Blake Glover was broadcast on BBC One in the TV programme The Last Explorers by Neil Oliver.

To celebrate the one hundredth anniversary of the death of Thomas Blake Glover Aberdeen held a Scottish Samurai Parade to mark his life achievements. This Scottish Samurai Parade took place at the Bridge of Don, the area of Glover House, on Saturday 17 September 2011. Primary School children, Secondary School children and students dressed in traditional Japanese costumes which ranged from Geisha girls, warriors and even dragons. They were helped with many rehearsals from Theatre Modo from Glasgow and the children re-enacted scenes from the life of Thomas Blake Glover. Other events that took place at the Bridge of Don Aberdeen, including at Gordon Barracks, included Japanese culture such as Kendo displays and a fireworks display.