The Bon Accord Shopping Centre in Aberdeen

- Guide to the facilities, events, shops and parking. 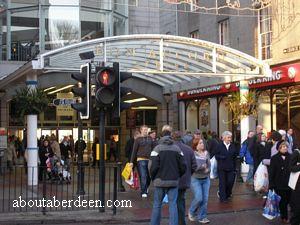 Some of these shops have online facilities and shopping - click below to go to the relevant facility: 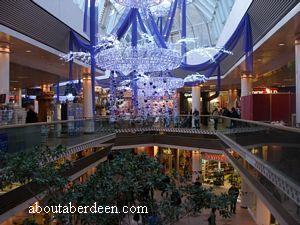 On the upper floor you will find the food court restaurant and snack area which can seat over 500. The area is severed by many food outlets that sell a wide range of food from traditional Scottish cooking, Italian cuisine and American food.


The public toilets can be found next to the food court restaurants.


Disabled facilities throughout the complex include lifts and toilets.


The Bon Accord has its own car park with over 1100 spaces.
Alternatively use the Park and Ride facilities which will drop and collect you from the town centre.

In August 2009 Next opened a large store in the top atrium of the Bon Accord Centre, Aberdeen next to the New Look shop. 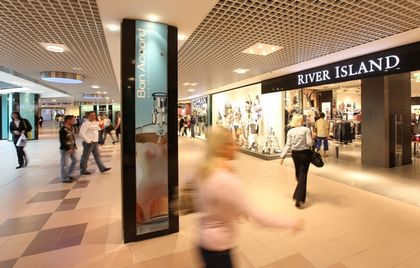 Fashion Festival Aberdeen takes place from Friday 24 to Saturday 25 September 2010 each day at the central atrium of the Bon Accord Centre. These fashion shows give shoppers visiting the North-east's premier retail destination this weekend the opportunity to view the latest seasonal must-haves on the catwalk at a top fashion event.

Fashion Festival Aberdeen is hosted by the Bon Accord and St Nicholas Centres. The fashion festival will showcase the latest trends for autumn and winter to inspire shoppers and add a touch of glamour to their weekend shopping spree.

Stores from both shopping centres are taking part in the Fashion Festival Aberdeen and include some of the latest arrivals such as Karen Millen, New Look, Lipsy and Scotland's biggest Next outlet. All the key trends will be on show which include muted metallic, kilts, capes and leather and will offer top style tips for fashion conscious shoppers.

Cheryl Baer, Marketing Manager of the Bon Accord and St Nicholas Centres, says the shows will underline the centres' position as the top fashion destination of choice for big brand retailers.

This year alone we have seen 15 high profile store arrivals in our centres, many of which are flagships in the North-east including Hobbs, Kurt Keiger and Jo Malone. As well as inspiring shoppers with the latest season looks, our weekend fashion event will celebrate the range and depth of choice on offer which is unrivalled across the region.

Shoppers visiting the Bon Accord and St Nicholas centres over the weekend can expect a host of other fashion and beauty delight including free giveaways and an invite into the More Magazine style booth. Fashionistas will also be treated to free makeovers and shown the latest looks for the season by beauty experts from Boots, John Lewis and The Body Shop.

With the Bon Accord and St Nicholas centres seeing the arrival of so many top brand names over the past year it is clear that Aberdeen is seen as the up and coming fashion capital of the North. With everything we have planned for the weekend-long event we hope to create the ultimate fashion experience for our shoppers. Whether you're looking for wardrobe inspiration from the catwalk or simply wanting to find out the latest fashion and beauty trends for the upcoming season, there is sure to be something for everyone. 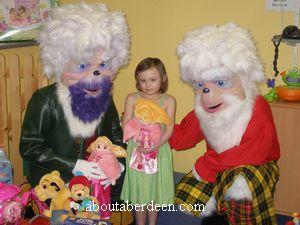 The Bon Accord shopping centre have their own mascots. They are the loveable duo of MacHappy and MacHuggy two larger than life cuddly characters as you can see from the photograph. MacHappy and MacHuggy often wander the upper and lower malls making friends with children and sharing a cuddle. TV viewers can see the Aberdeen mascots on the seasonal adverts for the Bon Accord Centre on Scottish Television, such as the Christmas ads.

MacHappy and MacHuggy do charitable good deeds around Grampian on behalf of the Bon Accord Centre Aberdeen. For example they often visit the Royal Aberdeen Children's Hospital to donate toys to the children’s communal play area, kindly donated by The Disney Store and to visit the kids to cheer them up. In a recent visit in February 2007 MacHappy and MacHuggy donated over 30 items including a Lightning McQueen car from Disney animation Cars, pirate ship, soft toys, Barbie horse and carriage and Cinderella suitcases from The Disney Store.

“We welcome MacHappy and MacHuggy to the hospital to present the centres kind donations for the children. Valentine’s Day is all about showing you care and it’s sometimes difficult for the children if they can’t be with their loved ones. The gifts will certainly brighten the children’s day and be a welcome addition to the play area. The children received a wonderful surprise.”

“It’s great to be able to make this donation and if we can make just one child’s stay in hospital a more cheerful time, then our job is done. I would like to thank the Disney Store for their kind participation in providing the gifts for the children’s play area and we hope that the children enjoy them.”

The photo above is 5 year old Eleanor Donald receiving gifts donated by the Disney Store from Bon Accord St Nicholas Centre mascots, MacHappy and MacHuggy.


Sale Success As Smart Shoppers Look Ahead To Christmas 2007

The Bon Accord St Nicholas Shopping Centre has reported a successful start to the New Year following on from a thriving festive season. As the January sales continue, trade at stores within the centre remains brisk with shoppers flocking to pick up post Christmas bargains. Astute local shoppers are becoming adept at thinking ahead according to research by YouGov, which states that 14% of people in Grampian will start shopping for Christmas 2007 in the January Sales.

"In the run up to Christmas trade was brisk with 1.8 million visitors to the Centre in the last 8 weeks of the year. We saw an increase in Saturday footfall of 33% compared to that of a normal Saturday, and our car parks were extremely busy throughout the peak period with 85% of cars staying between 3-4 hours.
"Between Christmas and New Year this trend persisted with a footfall of 44,000 being recorded on Boxing Day. As the sales continue in the majority of retail outlets in the centre January is proving to be a positive period for custom, with many people taking the opportunity to purchase some of the great bargains on offer."

Retailers in the Bon Accord St Nicholas Centre have reported ringing tills throughout the Christmas clearance period. General Manager of John Lewis, Kim Lowe says that this year’s sale has broken all previous records with figures showing that post Christmas clearance sales rose by 8.2% from 27 December to 2 January compared to the same period last year:

"We have consistently achieved record breaking sales in Aberdeen throughout 2006. In the first 49 weeks of this year the store exceeded its turnover for the entire year, with sales passing a landmark sterling figure for out first time ever during the post Christmas sales period."

Frank Sutherland adds:
"We are delighted with the performance of the Bon Accord St Nicholas Centre over the Christmas period and into January. With shoppers making the most of the continuing January sales, it signifies that there is a buoyant economy in Aberdeen and the North East."

"With retail outlets in the centre, such as Next, opening their doors early on Boxing Day, it will definitely be an early start for the bargain hunters. In keeping with the national trend, January sales seem to have arrived a month early this year, and there are some great bargains out there for December shoppers. Many of our outlets have up to 50% discount."

Frank continues: "Shopping figures during the festive period have seen an increase in Saturday footfall of 33% compared to that of a normal Saturday. We also have the largest animatronics display in Scotland with the centre mascots MacHappy and MacHuggy as the main characters. This is a huge draw for all ages of people, particularly families. The food court, cash machines and other facilities also entice shoppers to stay for longer."

Boxing Day opening hours at the Bon Accord St. Nicholas Shopping Centre are 11am – 5pm. 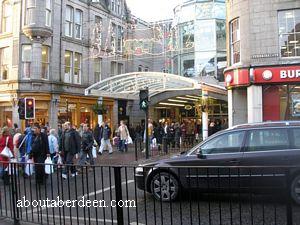 Since 2000 the Aberdeen Rotary Club have held an annual rotary club car raffle at the Bon Accord St Nicholas Shopping Centre. For 2006 tickets will be on sale from Tuesday 21 November until Sunday 24 December 2006 and shoppers have the chance to win a brand new red Mini One which is worth in the region of £11,000. The car is usually parked just outside the Bank of Scotland within the Bon Accord shopping centre, in the lower mall of the shopping centre’s central atrium, to entice Aberdonians to buy a rotary club car raffle ticket. Each raffle ticket is £1 and the draw for the car will take place on the afternoon of Christmas Eve, so someone is going to get a great Christmas present this year!

“This year we hope to raise somewhere in the region of £30,000,” explains president of Aberdeen St. Fittick’s rotary club, Mr Ian Kerr. “The main beneficiary of the funds collected will be the Aberdeen based charity UCAN, which aims to improve the quality of life for people and families living with urological cancers in North of Scotland.
“Other charities supported by the rotary clubs in the north east of Scotland district will also benefit from the total collected over the next few weeks,” adds Ian.

Frank Sutherland, centre manager for the Bon Accord Shopping Centre, says, “UCAN is a local charity which funds academic research into improving the quality of life for urological cancer patients and their families. The money raised by the raffle will go towards the work the charity conducts which includes raising the profile of urological cancers, and increasing awareness among the public of possible early symptoms, the importance of going to the GP with any concerns, and the benefits of early diagnosis. Staff at the Bon Accord St Nicholas Shopping Centre are very happy to support the rotary club raffle.”

John Reynolds, the Lord Provost of the City of Aberdeen will draw the sixth annual rotary club car raffle at 4pm in the lower mall of the Bon Accord St. Nicholas Shopping Centre on Sunday 24th December 2006.

"We have sold in the region of 35,000 raffle tickets with proceeds from the sale of the £1 tickets going to the Aberdeen based charity UCAN, which aims to improve the quality of life for people and families living with urological cancers in North of Scotland as well as other charities supported by the rotary clubs in the north east of Scotland district. Mr Kerr continues, "I wish all entrants the very best of luck and would like to thank everyone who has bought a ticket including shoppers at the Bon Accord St. Nicholas Shopping Centre, for supporting such a worthwhile cause."

The perfect pick-me-up, Costa Coffee will be offering the full range of foam topped and steaming delights to warm festive shoppers. Whether you long for a latte or crave a cappuccino, a host of coffees to suit all tastes are available. Seasonal treats include gingerbread and tiramisu lattes alongside Mint Hot Chocolate with the optional topping of chocolate cream. With Turkey and Stuffing sandwiches and Paninis, traditional mince pies, and orange and cranberry muffins all on sale, shoppers can be certain of a festive feast.