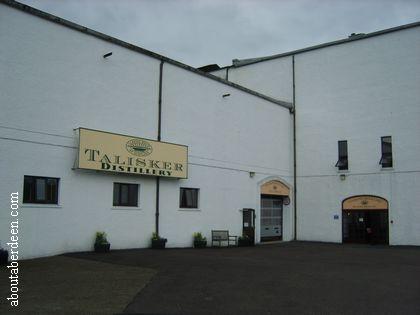 The Talisker Distillery can be found near Carbost on the Isle of Skye on the B8009 just off the A863. There is plenty of free parking and disabled car park spaces. The drive in gives some stunning views across Loch Harport and to the Cuillin mountains.

There are some stairs to get to the visitor centre where tickets to the Talisker Whisky Distillery Isle of Skye tour are on sale and there is a disabled lift. However there is no disabled access to the distillery stills and vats due to this still being a working distillery, but parts of the visitor centre can still be reached such as the range of historic photographs around the reception room and the all important free sample of Talisker Whisky that comes with the admission price of £5 for adults. You also get a £3 off discount voucher to spend at the Talisker Whisky Distillery shop if you buy a 70cl bottle of malt whisky. Children are welcome so long as they do not drink the whisky and those aged over 8 years can go on the tour.

Talisker Whisky Distillery is open from 09:30am to 5pm Monday to Saturday from Easter to October and on a Sunday from 12:30pm to 5pm during the busy tourist season of July and August. The last tour is one hour before the closing time. Out with these months the distillery tours can take place by appointment from November to March. The distillery closes on public holidays such as Christmas and New Year Day.

Do buy your distillery tour tickets first because there can often be a wait to get on a tour, especially during the peak summer holidays. Aboutaberdeen had a 30 minute wait whilst the people behind us in the queue had to wait an hour. But please do not let this put you off because there is plenty to do whilst you wait. First off you get your free ten year old Talisker malt whisky and if you are an overseas tourist on the special distillery tour you get to sample the sweeter 18 year old Talisker malt.

The www.aboutaberdeen.com team found Talisker malt whisky to be smooth and rather moreish with a mild peaty aroma. We later found this not to be from the peat water on the hills because a spring is used but from the peat used to heat the barley. The 10 year old malt Talisker whisky was mildly sweet and left a pleasant lingering taste.

Once warmed by our free dram we looked around the visitor centre which had a history of whisky making and a history of Talisker Whisky Distillery on the Isle of Skye with photographs and boards explaining the distillation process. In the centre are glass cabinets of historical items. Toilets can be found at the visitor centre and there are table and chairs.

Once called for the distillery tour you enter the distillery by the far door where the guide will talk about the history of Talisker Distillery and how the whisky is made such as the malting and mashing. Visitors can see inside the vats and have a sniff. The local farmers use the by products to feed their livestock and explains why they look so happy!

The magnificent looking stills can be seen before going to the storage area. There are a number of stairs so people with a disability may not be able to access parts of the tour. Photography is not permitted inside the Talisker Distillery but you can take photos of the casks and outside. 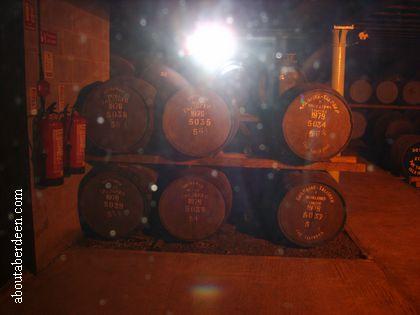 
Talisker Distillery opened in the year 1830 by brothers Hugh and Kenneth MacAskill of nearby Eigg. They ran it successfully until their deaths in 1854 (Kenneth MacAskill) and 1863 (Hugh MacAskill) and the distillery was inherited by Donald MacLennan, their son in law who was made bankrupt several years later. Sadly the same fate befell the next owner, J Anderson, not from poor business like Donald but from illegally taking payment for whisky kept in bond which did not exist.

Fortunately the taste and reputation of Taliskers endured and was nicknamed The Golden Spirit of Skye. 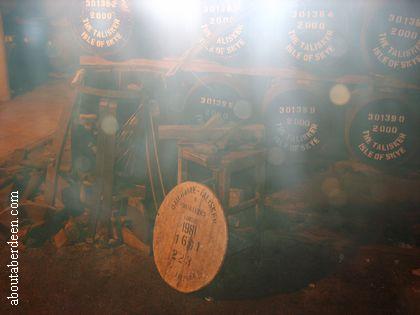 During World War Two there was Government restrictions on the supply of barley to help the food supplies so like many distilleries Talisker closed from 1941 until the end of WWII in 1945.

A fire in the stillhouse caused production to stop again in November 1960. Copies of the stills were installed in 1962 and production of Talisker whisky continues to this day.