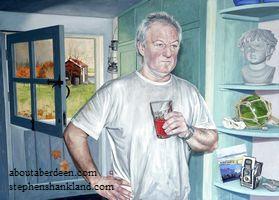 
Stephen Shankland lives and works near Cruden Bay and the picturesque peaceful harbour, beach and fishing village has been inspirational to his figurative work.


In 2004 Stephen won the BP Portrait Award for his painting entitled The Miracle which was a portrait of his wife, Kelly Cairns, and their son Connor.


Artwork And Paintings Of Stephen Shankland


His work has been exhibited at many art galleries including:


From the 27 April to 14 May 2006 Stephen Shankland will exhibit his paintings at The Royal Society of Portrait Painters Annual Exhibition at the Mall Galleries, The Mall (near Trafalgar Square), London.

From September the 2nd 2005 his latest work entitles Being Frank will be on display at Christies in London. It depicts actor Peter Mullan in characterisation in his latest film called On A Clear Day. Read more about Peter Mullan. The painting is being judged for The Garrick Milne Prize.

Stephen Shankland was commissioned to paint an Ian McDiarmid Portrait. The Scottish actor is most famous for playing Supreme Chancellor Palpatine in the Star Wars films. A lego stormtrooper figure was even cheekily painted into the background by Stephen. The Ian McDiarmid portrait was unveiled at the Royal Society of Portrait Painters annual exhibition in London and was shown at The Mall Galleries by Trafalgar Square, London during April and May 2008.