Son of the Manse


The son of the manse is a phrase used for children whose father was a minister of the Church of Scotland. Ministers are given a house with their church and this is called The Manse. Famous sons of the manse include Prime Minister Gordon Brown and former PM Andrew Bonar Law, the Scottish athlete Eric Liddle, The inventor of television John Logie Baird, the pirate Captain Thomas Kidd , politicians Sir David Steele, Michael Moore, Peter Fraser and James Gray, the novelist John Buchan, the actor David Tennant (Dr Who), the founder of the BBC John Reith, John Witherspoon who was a signatory of the United Stated Declaration of Independence and the 2007 Labour MSP and leader of the Labour Party in the Scottish parliament, though it may be more grammatically correct to call Wendy Alexander a daughter of the manse. Other daughters of the manse include the broadcaster Sheena McDonald.

An addition to the list of famous sons of the manse include local author David Finlay Clark who has written many books including Stand By Your Beds! where he describes his national service days and Remember Who You Are which is his story of being a son of the manse.

As a clinical psychologist David Findlay Clark is ideally placed to analyse his first twenty one years of life and the effect being a son of the manse has had on his life.

He opens with a description of his father's grief at finding his wife in distress, their still born daughter lying by her and the midwife asleep in a chair. So starts the self analyse and thoughts on his family and upbringing.

This includes a description of his father's entry into the Church and his grandfather's reaction to shun his son for becoming a minister and leaving his "respectful" job as a school teacher. There follows an interesting account of why his father was the minister who performed the committal service in 1911 at Edinburgh during the funeral of The Great Lafayette a showman and illusionist who died in a fire at the Empire Theatre in Edinburgh. Though he was a Jew (real name Sigmund Newburger) he was given a Christian funeral service because he wanted his ashes to be buried with the body of his embalmed dog, Beauty, who had died earlier (and was a gift from Harry Houdini) and no Jewish Rabbi would perform the service because they considered the dog to be an unclean animal. The Reverend D Findlay Clarke received a payment of £5 for conducting the service of The Great Lafayette. Though the cheque bounced!

The picture to the left is of the author, David Findlay Clark, on the right with his mother, father and younger brother.

His father moved from St Mathew's Parish Church in Morningside Edinburgh where he had been a student Assistant to his own parish church in Lochgelly in Fife and then onto the John Knox Church in Mounthooly in Aberdeen city. His final position was in St Mary's parish church in Banff.

David Findlay Clark was born in 1930 and lived in the Banff Manse in Sandyhill Road. He was joined by a younger brother and sadly his mother had another still born daughter.

Childhood memories are recalled such as runs up to Royal Deeside in his uncle's car which was a rare treat because his Minister father never owned a car. His stipend never stretched to that expense and he though nothing of walking 14 miles to visit a parishioner.

The author describes his coal miner grandfather and memories of how he would come home weary from a shift down the pit and remove all his coal dust ridden clothes and soak in a tin bath by the fire in the front room. He describes life in the pit and living in a pit miner's cottage and how the families would dread the sound of the hooter blowing to signal an emergency such as a roof fall for the Mine Rescue Squad to attend. The author of Son of the Manse recalls waiting with relatives during one holiday visit to see if an ambulance was called for or if the winding wheels of the winding gear would keep turning to signify that no lives were in danger because work continued. On happier occasions his grandfather would tell tales about the pit canaries and donkeys. On one occasion he was even taken down the pit, when he was eight years old, in the pit cage by his grandfather to show him where he worked. He managed to use a pick and hack oot a bit o' coal fur a souvenir for myself and his younger brother Thomas. The author treasured this bit of coal and after his holiday took it back to the Manse where it became a lucky piece of coal and bits were exchanged amongst school friends in return for marbles, a Dinky toy aeroplane and even an elastic catapult.

These holiday visitors introduced the author to outside privies and next to these toilets the mangle and shared washhouses of the pit workers families. More enjoyable visits were to the local sweetie shop for the penny lines and visits by the ice cream man on his bicycle.

In the Son of the Manse the author also takes a look at the parenting skills of both parents in an era when discipline was thought to make a better child.

He reminisces about childhood games such as how games of marbles (boolies) would be played and how target holes in the playground would be created. There is also a detailed section about how home made catapults were made from tyres and shoe tongues.

Modern school children may marvel that children would have had to take a bottle of water not as a drink, but to clean the slate from which children of the author's generation were taught. Kids of today will also be grateful that the tawse is no longer in use by teachers and are spared the sore palms and wrists if the teacher's aim was poor.

The title of this book comes from the reply of his mother when he or his brother Thomas had misbehaved or performed some innocent but seemingly disrespectful act like bringing home the wrong sort of girlfriend. She would retort Remember Who You Are! and remind them what a privilege it was to be a Ministers loon. Even as a youngster with innocent wants he and his brother yearned for the Dandy, the Wizard or Hotspur comic rather than the Children's Newspaper which their father thought much more suitable for sons of the manse.

Remember Who You Are the story of a son of the manse by David Findlay Clark is a fascinating read for anyone wanting to relive or learn more about growing up in the 1930s and 1940s in Scotland. A time when homes were just getting electricity or piped gas, a time without television and radio was an expensive luxury due to costly batteries but dance halls were plentiful. It was an era of make do and mend.

It was also the time of World War Two and David Findlay Clark describes the home interruptions of air raid warnings and having to be taken from his warm bed to the cold shelter and try to sleep before going into school as usual. He recalls going with his friends to RAF Banff Strike Wing airfield to watch the squadrons of Mosquitos and Beaufighters take off for sorties to Norway whilst their wives waited anxiously at Banff High Street where they would count the planes in and out.

The family survived and the next chapter in his life was studying at Aberdeen University where David Findlay Clark left the Manse and stayed with a landlady in Holburn Street in Aberdeen City. Though just before that he embarked upon a cycling trip around the UK. 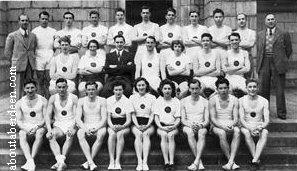 The photo to the left is of the Aberdeen University Athletics club taken in 1950. The author of Remember Who You Are: the story of a son of the manse can be seen on the far left of the front row.

The epilogue to the book about the son of the manse is written by the Rt Hon The Lord Steel of Aikwood who is himself a son of the manse. He writes that he was steered into a helping profession as were his siblings. His brothers and sisters all had careers in helping professions such as the police force, nursing, medicine, parliament and occupational therapy. The author was also steered into a career of caring. After his national service as an RAF officer he became a clinical psychologist working in the National Health Service in Aberdeenshire. Later he became a Director of the Grampian Health Board and then the Deputy Lieutenant of Banffshire in 1992, a Sheriff in the Sheriffdom of Grampian, Highlands and Islands of Banff and a Consultant for the World Health Organisation in Sri Lanka. He now enjoys writing, photography, painting and golf.

Remember Who You Are! The story of a son of the Manse by David Findlay Clark was published by Cualann Press in 2007 and can be purchased directly from cualann.com

The recommended retail price of the book Remember Who You Are is £12.99 and the ISBN is 978-0-9554273-1-2. It runs to 192 pages with over 32 photographs which includes old photos of Banff links, St Mary's Parish Church Manse in Banff during the 1930s, the Manse and the gardens, as well as generations of family pictures. Other pictures include images of Banff Academy during the Second World War.