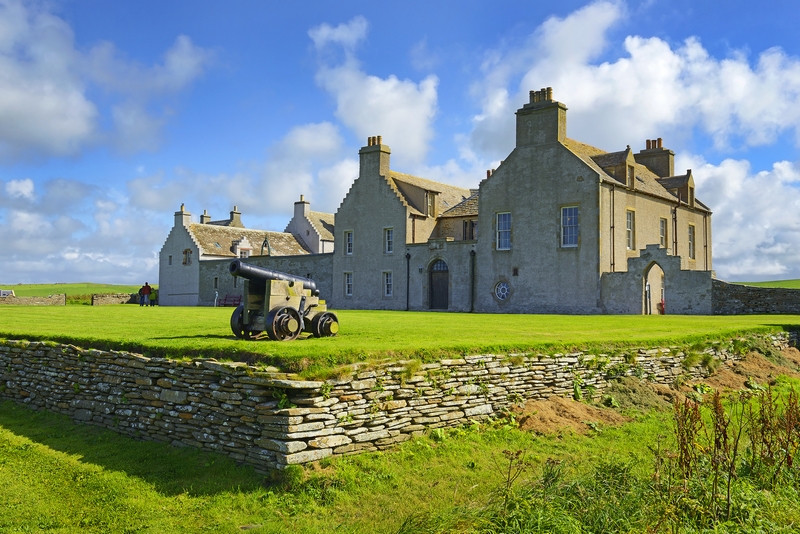 Skaill House is a 17th Century Manor House and was built in 1620 for the Bishop George Graham and can be found in Orkney by the sandy shore of the Bay o' Skaill, in the Parish of Sandwick. It sits 300 metres from the stone age village of Skara Brae. Skaill is the old Norse word for Hall. Many of the surrounding farms have ancient Norse names. Over the years Skaill House has been extended to form the large Manor House that it is today. It remained a family home until the 1950s. In the 1990s the House underwent major restoration work and opened to the public in 1997. During the restoration work 15 skeletons, thought to be early Pictish people, were found under the gravel of the East Porch in the South Wing.

Rooms of interest include the Bishop Graham bedroom and the Gun Room which display many weapons and military memorabilia. There are many fine paintings around the House including some by the artist Stanley Cursiter. The Captain Cook dinner service is on display which was used on board his ship The Resolution and the garden is famed for its spacious lawns.

Skaill House in Orkney has a number of ghosts. It was built on the remains of an ancient Pictish burial ground and many ghost hunters believe this is one of the reasons for the many hauntings at Skaill House.


In the nearby Skaill Loch sits a small island. Local legend has it that a man called Ubby would row out to the middle of Skaill Loch and drop off stones each day. He continued to throw overboard these stones and boulders until a small island was formed. Ubby died on the island on Skaill Loch and his ghost haunts the nearby building of Skaill House. Ubby has never been seen but his presence has been felt and heard. People have reported ghostly footsteps and others have seen or felt someone sitting down on the edge of their bed whilst they slept or laid in bed.

One person who has heard Ubby walking about was Major Malcolm Robert Scarth Macrae who became the Laird of Breckness in 1991. He was working in the apartments around the Skaill House courtyard at night in the same year. In the corridor outside he heard footsteps, though no-one was there. The Laird had his dog with him and it started to growl and bark before running away. The Laird later told this story to a relative who then told him the tale of Ubby and his ghost.


Ghost Woman In A Shawl