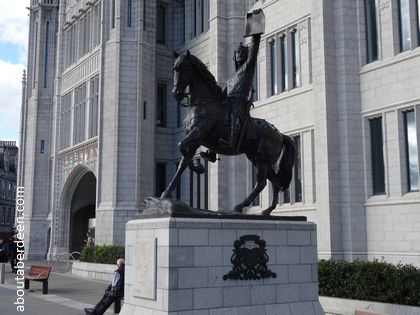 This magnificent Robert the Bruce statue was unveiled on the 9 May 2011 and took four years to make. It was sculpted by Alan Beattie Herriot and sits proudly outside the former Marischal College and University buildings which are now used as the Aberdeen City Council Headquarters.

The inscription on the front of the granite plith says:

During a special ceremony two direct descendants of King Robert were present along with local dignitaries. These were Lord Charles Bruce, Master Benedict Bruce and the Lord Provost Peter Stephen. The unveiling of this special monument, which is a commanding 18ft 4in tall, was performed by Kevin Stewart, the Deputy Leader of Aberdeen City Council Councillor who initiated a motion for the artwork creation in recognition of what Robert the Bruce has done for the people of Aberdeen. This was chiefly setting up a charter in 1319 for the Common Good fund, which appropriately paid for the £125,000 statue. This charter is what King Robert the Bruce is holding in his left hand. It also granted Aberdeen feudal rights over the Forest of Stocket.

A civic procession from the Town House went to Marischal College with Lord Bruce carrying the Sword of Bruce whilst Master Bruce carried the Banner of Chief of the Bruce family. A piper played Scotland the Brave. Other local dignitaries taking part included the Chief Executive of Aberdeen City Council Valerie Watts, the Leader of Aberdeen City Council Councillor John Stewart, and the Dean of Guild Fred Dalgarno and sculptor Alan Beattie Herriot. He was chosen by a poll of visitors to the nearby Art Gallery as the artist out of forty others to have the honour of creating this piece by a public poll. His image is reminiscent of what our Scots King would have looked like at the Battle of Bannockburn in 1314. The Midlothian based artist made it in sections of the human figure and horse at Powderhall Foundry in Leith and then welded them together. It is constructed from steel and reinforced polystyrene and then cast it in bronze. The more detailed parts of the figure were made from terracotta clay then a layer of silicone rubber was added before being cast in bronze.


In 2014 a Dolphin Sculpture was placed next to the statue. The artist was Lesley D McKenzie and she called it Bon Accord Beauty to showcase the best attractions of our city and it featured this painting: 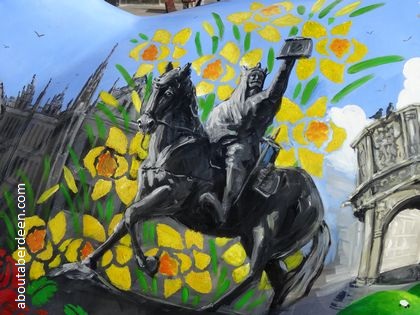 See also the Toast of Bon Accord.