The story of Rob Roy 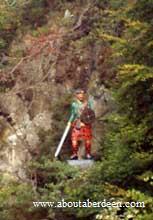 Rob Roy McGregor was a Highland Hero and loveable rogue, though others would have called him a thief and cattle rustler. He was born in 1670 and died in 1734. His trade in adult life was as a cattle owner and herdsman and he was an accomplished swordsman. During the uprising of 1715 he led his Clan to fight for the Jacobites. For this he was charged with treason and had to become an outlaw.


The History Of The Rob Roy Statue At Peterculter


Situated just outside Peterculter, near Banchory in Aberdeenshire, at the Bridge by the picturesque and peaceful Culter Burn, the statue of Rob Roy McGregor proudly stands with his claymore sword and shield in hand.

This nine foot wooden statue is the fourth to be erected. It was created by George Shaw and has been maintained by Danny Laing along with apprentices from Aberdeen College, Wayne Duncan, Ross Divers, John Morris and Aaron Anderson.

The first Rob Roy statue was erected in the 1850s by David Anderson who worked at Culter Mill. It was a ships figurehead.

The third statue was erected in 1926 and was replaced in 1991. It now lives at the St Peter's Heritage Trust.

In 1975 an arm from the Rob Roy statue was stolen.

In 2002 the statue was put up for sale and the locals of Culter raised funds to purchase the statue at public auction.

The surname of Rob Roy is often spelt MacGregor.

Items that belonged to Rob Roy McGregor are kept and on display at Inverary Castle which includes his sporran.


For years the sword that was said to have caused the death of Rob Roy was owned by a Borders family and in 2007 they took the sword that belonged to Charles Stuart to sword maker, historian and sword restorer Paul Macdonald in Edinburgh so that it could be restored. The sword has been in the family for generations and has been handed down throughout the centuries.

The sword had been used to fight a duel with Rob Roy and swordsman Charles Stuart was the only person to defeat the outlaw Rob Roy in a duel. The event was recorded in the Dewar Manuscript and records that it took place in an inn near Stirling, Scotland. They argued over their actions at the Battle of Sheriffmuir in the year 1715. Rob Roy challenged Charles Stuart to a duel and this ended when Rob Roy was slashed on the chin.

Years later, in 1734, Rob Roy died from blood poisoning which was said to have been from this wound on his chin.

Many people have wrongly recorded this duel as being fought with Alisdair Stuart, including author Sir Walter Scott in his novel Rob Roy.

Sword restorer Paul Macdonald was able to arrange to reunite this sword with that with the Rob Roy sword which now belonged to a family in Moidart in the West Highlands of Scotland. He restored both swords which included working on the leather scabbard of Stuart's sword and removing surface rust from the Rob Roy sword. Both owners agreed to display the swords at an exhibition in London and then at the National Museum in Edinburgh which was less that 40 miles where Rob Roy and Charles Stuart fought their duel. The Jacobean swords are now worth several thousand pounds.