Aberdeen lass, Rachael Tennent was brought up in the Cults area and attended Albyn School for Girls and Cults academy. She became a local celebrity when she made the top 10 finalists to the 2006 Miss Scotland competition. She then made it to third position, losing out to Miss Scotland to fellow Aberdonian lass Nicola McLean. Rachael Tennent went on to win Miss Great Britain 2007 as can be seen from the photographs below. She was aged 18 years.

Proud father Jimmy her mother Christine and her brother Craig were at the event to see Rachael Tennent be awarded the Miss Great Britain 2007 title.

The Miss Great Britain 2006 title was won by Danielle Lloyd (Celebrity Big Brother) though stripped from her when a relationship with the judge, footballer Teddy Sheringham, was revealed. It was later awarded to Preeti Desai.

Rachael Tennent will also compete in the Model of the World contest 2007.

As part of the Miss Great Britain 2007 prize Rachael Tennant won a brand new black Mini Cooper car, a top hairdresser for a year, free jewellery from a leading jeweller and an LA and UK modelling contract.

Rachael gave up her job as a project co-ordinator at RBG Dyce to concentrate full time on her Miss Great Britain commitments such as TV appearances and charity events and her modelling career. Interviews, photo shoots and publicity is now handled by her agent. In June 2007 she appeared in OK! magazine. 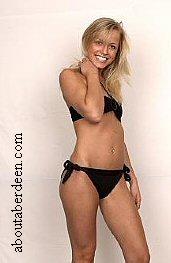 The picture on the left is of Rachael Tennent in her bikini.

In May 2007 Rachael Tennent made it to the final 30 women in the Miss Scotland competition. The final will be held on 2 June. On the 24 May 2007 Rachel decided to pull out of Miss Scotland despite being in the last 12 contestants because she had won the Miss Great Britain 2007 title.

Rachael Tennent does not do nude, full naked or topless modelling.

Since winning Miss Great Britain Rachael Tennent has enjoyed a busy social life at night clubs such as the nightclub Chinawhite in London, meeting celebrities like Callum Best who is friends with her manager. Unfortunately tabloid newspaper printed photos of Rachel Tennent with Callum Best getting into a taxi and this led to rumours that they may be having a relationship rather than getting into the same cab with a group of friends, other Miss Great Britain contestants, her agent and manager.

Rachael Tennant returns to Aberdeen often and is active in the local area. For example in June 2007 she was a judge in the Evening Express Happy Tots Competition where local children had their photographs taken by a professional photographer at The Mall Trinity Shopping Centre. Fellow judges were actress Joyce Falconer and face of Aberdeen and Aberdeenshire winner 2007 Sarah Malone who is also the curator at the Gordon Highlander Museum.

Rachael Tennent met the finalists at a party at the Hilton Treetops Hotel in Aberdeen in August 2007. Her appearance prompted many of the Happy Tots to want to be the next Miss Great Britain!

Wherever possible Miss Great Britain Rachael Tennent likes to promote Scotland. For example on Saturday 8 September and Sunday 9 September 2007 Rachael Tennent was involved in promoting The London Gathering which is a cultural festival that promotes Scottish culture at the Inner Temple Gardens in London. The weekend events include Scottish music, Scottish dancing, Scots literature and Scottish food and drink.

On Saturday 3 November 2007 Rachael Tennent, the reigning Miss Great Britain, will be the guest of honour at the Crimestoppers Masked Ball fundraiser at the Marcliffe Hotel and Spa.


RachaelTennent worked at the oil company RBG Ltd and did part time modelling. She now lives in Milltimber, Aberdeenshire. She is signed to the modelling agency Face Model Management.

Prior to this RachaelTennant worked as a waitress at Aberdeen's Cafe Society before gaining full time employment at Rigblast Group in Dyce Aberdeen.

Rachael Tennant is in the final of Miss Great Britain 2007 which is held in May.

Rachel Tennent's boyfriend in Aberdeen was David who works for BP.