Information and photographs of Pennan and Pennan Harbour in Scotland

Pennan is a hidden gem of Aberdeenshire, Scotland. It sits below the farmlands of rural Grampian, near Fraserburgh. The drive down to Pennan Bay is quite steep and care should be taken to drive slowly down this narrow road, but rewards await. There is a car park at the top of the Pennan road and the village and harbour is a short, but pleasant walk. 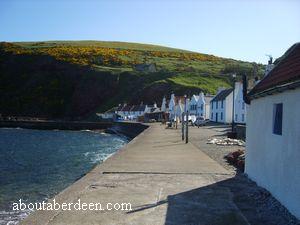 Pennan was a traditional fishing village community and this is still in evidence with the rows of drying greens for fishing nets which is now giving over to washing lines and benches and seats to sit and enjoy the coastal views. Do look out for a unique bench made from driftwood by one of the villagers. The old fashioned fishing cottages and houses have retained their charm and are still white-washed. 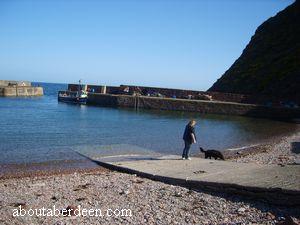 One or two fishermen with their boats and creel baskets still fish from the harbour and others now earn their living from giving boat trips to tourists to see the local wildlife like seals and birds and to enjoy more coastal views from the sea. These costs from only £5 for children and £10 for an adult. 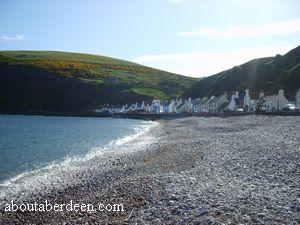 The beach is pebbly with a small area of sand and is enclosed by cliffs. The feeling of getting away from it all is one of the charms of Pennan.

Souvenir cards and photographs can be bought outside one of the private houses.

Toilets are situated at the far left as you enter Pennan and there is plenty of free parking.

Meals, bar snacks, hot and cold drinks and alcoholic refreshments are available at the Pennan Inn which is directly across from the most famous Pennan landmark of the traditional red phone box. My camera ran out of batteries as I got there to take a photograph but I will add this photo to the page in a few weeks.

. It starred Burt Lancaster, Fulton Mackay, Denis Lawson, Peter Capaldi, Rikki Fulton, Jenny Seagrove and Jennifer Black. Local Hero told the story of an Oil Billionaire called Happer who sends a man called Mac to Pennan to buy the property rights so that they can build an oil refinery. The locals cannot believe their luck and look forward to their new fortunes but are hampered by Ben Knox, a hermit who owns and lives on the beach in an old shack. Happer has to fly out to settle negotiations and falls in love with the Scottish village. Buy Local Hero

The final theme tune of Local hero was written and performed by Mark Knopfler of Dire Straits.

To mark the 25th anniversary of the release of Local Hero the cast and crew were reunited for a special screening in Glasgow during the 2008 film festival. This included Denis Lawson who played Gordon Urquhart.