Information about Old Aberdeen and the history of Old Aberdeen including St Machar's Cathedral, the Brig o' Balgownie, King's College, Powis Gates and other buildings in the Chanonry and the Spital:


Old Aberdeen is a fine example of preserved ancient dwellings, some dating back to the Middle Ages and atmospheric cobbled streets. The area dates back to the 15th century and Old Aberdeen was a separate burgh having been granted into a burgh of barony on 26 December 1489 by King James IV. The area prospered and grew thanks mainly to the active merchants in the area. It grew more as King's College developed. In 1891 an Act of Parliament incorporated Old Aberdeen into adjacent Aberdeen. It still remains part of Aberdeen City. The 14th century Brig o' Balgownie hamlet and surrounding areas remained largely undeveloped until the Aberdeen oil boom in the 1960s when more housing was needed in the area and developments like Tillydrone were built. The heart of Old Aberdeen remains a conservation area to preserve the historic buildings and unique architecture. 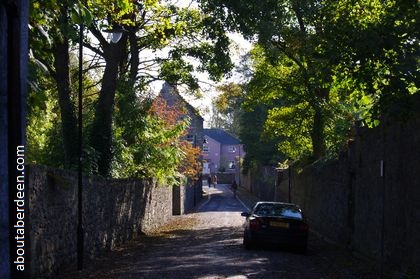 
There has been settlements in the area and these can be traced back to prehistoric times for the Tillydrone Motte in Seaton Park.

Buildings Of Old Aberdeen
Notable buildings of Old Aberdeen include Provost Skene's House, King's College which is now part of Aberdeen University and was built around a Quadrangle. It has its own visitor centre with displays, a shop and a cafe. Other historic buildings in Old Aberdeen are the King's College Chapel, St Machar's Cathedral, the Old Town House, St Margaret's Chapel and Convent and Marischal College. 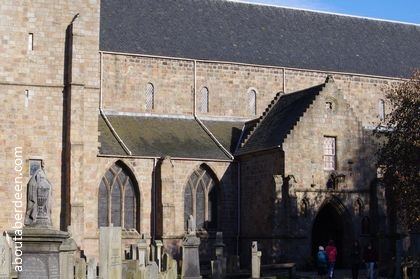 St Machar was a disciple of Saint Columba and St Machar's Cathedral is named in his honour. It is said that Columba instructed his disciple to built the church near the site where the River Don crooks to look like a Bishop's staff. In the year 1100 it became a Cathedral when the seat of the Bishop was transferred from Mortlach, near Dufftown. The Cathedral we see now was rebuilt in the late 13th century under the instruction of Bishop Cheyne who lived from 1282 to 1328. He never saw the finished Cathedral because building work was interrupted by the Wars of Independence. Other Bishops continued his work including Bishop Kinnimund and Bishop Dunbar. 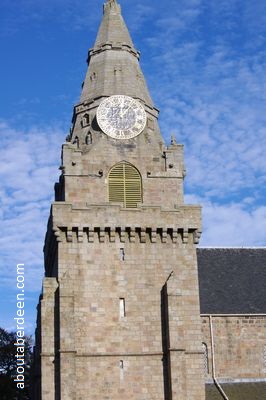 St Machar's lost its Cathedral status after the Reformation years and much of its treasures were dispersed and land sold.

The church regained its Cathedral status years later and now has many features such as the Douglas Strachan's First World War Memorial stained glass window, an organ in the North Aisle by Henry Willis and installed in 1891 and a font that dates back to 1954.

Gatehouses were added to St Machar's Cathedral in 1832 and were designed by John Smith. 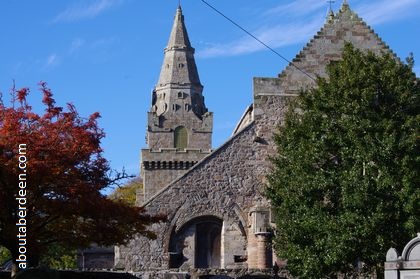 The area of Saint Machar's Cathedral is known as The Chanonry and grew from the building of the Cathedral in the 12th and 13th centuries. The origins of the name the Chanonry is from the street being the home to the clergy (known at the time as canons) of St Machar's Cathedral from around the year 1240. The Manses used by the canons were named after the areas who provided the stipend of the clergy, eg Clatt, Belhelvie, Daviot and Old Rayne. Sadly most of these buildings were destroyed in the Reformation years. Chanonry Lodge was built on part of these sites and is now home to the Principal of the University of Aberdeen. Other parts of the land cleared during the Reformation was made into the Cluny's Garden and is now the Cruickshank Botanical Garden and the Department of Plant and Soil Science. 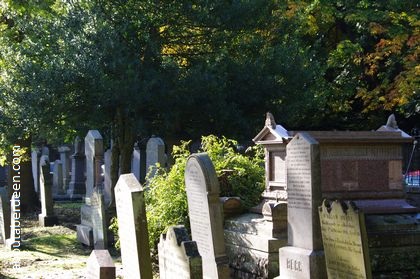 Saint Margaret's Chapel and Convent is in the area known as The Spital. It dates back to 1892 when the Rector of nearby St John's Episcopal Church in Aberdeen wanted a community to care for the sick and the poor. He was the founder of something similar in Sussex, England called The Society of St Margaret at East Grinstead. The Chapel was designed by Sir John Ninian Comper whose father was a Reverend but the eventual building incorporated existing buildings as well as some of the original drawings.

A walk down the streets and roads of Old Aberdeen is like a step back in time with their old houses dating back through the centuries, some as early as the 17th Century and cobbled streets. Parking is limited so it is best to walk to Old Aberdeen. Though the area dates back to the 14th and 15th centuries the surviving buildings were built in the 18th and 19th centuries.

The Powis Gates were erected between 1833 and 1834 by John Leslie of Powis. His father, Hugh Leslie, had built Powis House in 1802. The Powis Gates structure are topped with minarets, much to the Turkish style as are the crescent topped surrounding gates. This is the emblem of the original owners of the Powis estate, the Fraser family.


Old Aberdeen The University of Aberdeen

Read more in the A visitor's guide to King's College, University of Aberdeen

Read more about Old Aberdeen in A tale of two burghs: The archaeology of Old and New Aberdeen

In May 2007 St Machar's Cathedral appointed its first Director of Music, Mr Michael Thomson. The appointment was made possible as part of a legacy from the late Mr James Lobban who left £600,000 in his will to St Machar Cathedral. Mr Lobban was a former organist and master of choristers at St Machar Cathedral who died in September 2006, aged 64. His will requested that the money be used for musical development at St Machar Cathedral, Aberdeen. His total estate was worth £1,036,011. Other Aberdeen charities and societies benefited from his will which included Aberdeen Grammar School's FP's Club and the Bach Society.

Mr Michael Thomson was appointed by the St Machar Cathedral Kirk Session and his role will be to develop concerts and recitals at St Machar Cathedral. He was an assistant organist at the Cathedral from 1981 to 2006 and also worked at the Libraries Department at Aberdeen City Council. His speciality was music.

The Linton Singers
Saturday 4 October 2008 at 7.30 pm - Concert called An Autumn Collection presented by The Linton Singers and the Edinburgh Renaissance Band at St Machar's Cathedral, Aberdeen. Entry costs £7 (£5 for students). Learn more about the ERB on their website www.edinburghrenaissanceband.net. This will be a very entertaining and interesting evening of early music by Scots and European composers played on all sorts of strange instruments. The conductor is Murray Campbell, who is Professor of Musical Acoustics at Edinburgh University, and assistant curator of their collection of early instruments.

The Linton Singers (also conducted by Murray Campbell) are members of a community choir in West Linton, Peeblesshire which has a very wide and varied repertoire of music spanning about six centuries. The group has sung in many prestigious venues including Edinburgh and Stirling Castles, Rosslyn Chapel, Kelvingrove Art Gallery, Greyfriars Kirk, St Magnus Cathedral, as well as in Stockholm, Prague, Paris, and this July, Montbeliard in France. The Linton Singers look forward to a very happy and relaxed evening in the company of the guid fowk o' the north-east.