The Northern Lights of Old Aberdeen song is a traditional Scottish song written by Mary Webb for a home sick Aberdonian lass who she worked with in a hospital kitchen. Mary Webb was English and lived in London and had never been to Aberdeen, Scotland. She was born in Leamington Spa and was a concert pianist. Her song lyrics are further below.


Her fellow worker was invited to Mary's house for tea and when they were talking about Aberdeen Mary asked if that was where the Aurora Borealis, the Northern Lights, could be seen. Mary Webb composed the words to Northern Lights of Old Aberdeen to cheer up the homesick woman.


Mary Webb then sent the Northern Lights of Old Aberdeen lyrics to Robert Wilson who was a Scottish tenor. He sang it at the Albert Hall and the song grew in popularity. Mary Webb came to the Granite City and performed it at the Tivoli Theatre.

Mary Webb died at Charing Cross Hospital in London aged 88 years. By co-incidence the BBC were making a documentary about her and found that her body had remained unclaimed for three weeks. Her ashes were scattered in the grounds of Kaimhill Crematorium. Her John Broadwood piano on which she composed it was saved by broadcaster, author and journalist Jack Webster who was working for BBC Scotland and presented to the Council. It stayed in storage in Kittybrewster before being put on display in 2009 and unveiled by Lord Provost Peter Stephen, Duncan Hendry the head of HMT (His Majesty's Theatre) and Jack Webster. The piano can now be seen in the Mary Garden room of the Music Hall. The documentary about Mary Webb was shown on BBC Scotland in 1989.


Below are the lyrics to the Northern Lights Of Old Aberdeen:

When I was a lad, a tiny wee lad,
My mother said to me,
Come see the Northern Lights my boy,
They're bright as they can be.
She called them the heavenly dancers,
Merry dancers in the sky,
I'll never forget that wonderful sight,
They made the heavens bright.


I've wandered in many far-off lands,
And travelled many a mile.
I've missed the folk I've cherished most,
The joys of a friendly smile.
It warms up the heart of a wand'rer,
The clasp of a welcoming hand,
To greet me when I return,
Home to my native land.

When the Dolphin Sculptures came to the Granite City in 2014 coachbuilder Jason Grant deigned and painted this one using his skills from his day job at First Aberdeen and named it after the song. He drew inspiration from the design on the 17 and 18 Northern Lights services. This Wild Dolphin was sponsored by the bus company. We think it beautifully sums up our iconic skyline. 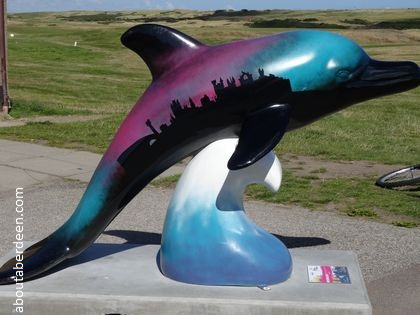