Queen of the Commonwealth

The International beauty queen success surpassed all expectations by also being awarded the Miss Commonwealth Scotland 2006 title for the second year, retaining her title as Scotland's Culture and Charity Queen. In a very political pageant to attain such an honour for Scotland is a huge achievement. 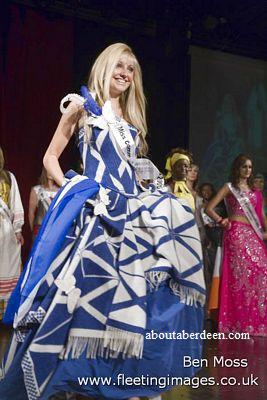 In the past year and a half as Miss Commonwealth Scotland, Amanda Jane has given up most of her spare time to help raise money for over 40 charities. In that time she has raised awareness and funding for charities from Huntington's disease, Children 1st, ChildLine to many cancer charities, many which have a special place in her heart.

The Aberdeen born beauty has waived fees for guest appearances, choreographed fashion shows, fronted singing contests, slept out for the homeless, donated designer clothing and taken part in the Cancer Research Race for life to name only a few of her efforts to help raise valuable funding. Her efforts to date have helped raise over a million pounds for charities throughout the world but especially in and around the town she was born and brought up in.

Working full time as a Dental hygienist Amanda Jane Taylor admits that juggling with her profession, modelling, singing and charity work can be very difficult at times but she tries her utmost to help any worthy cause.

But despite all her charity work and full time employment she still manages to model and attend press calls and photo shoots. Signed to 8 model agencies throughout the country she is Mattel's Face of Barbie and the Face of two Scottish couture companies. She is known also for her singing success and has appeared at many big events. Featuring in no less than 250 press and magazine articles she is currently in a television advertisement for a large Scottish furniture company.

The former Miss Aberdeen and beauty queen success of many title wins worldwide was such a huge inspiration to many girls and their chaperones at the weekend that she has been invited as a special guest to the biggest pageant in the Far East, Miss Malaysia Indian Global as well as an invitation to visit the Massai warriors in Africa. She was even honoured to meet and share a taxi with Nelson Mandela's grandson.

'It was very humbling to hear the tales of the poorer countries where they are struggling just for an existence' said Amanda Jane Taylor 'We are so lucky in this country and even to have water is a luxury to others.'

In recognition of all Amanda Jane's success the Commonwealth Organisers have invited her once again to sing at the 2007 Triple Crown Contest. As Miss Commonwealth Scotland, Amanda-Jane was recently requested too by the Lord Provost to become an Ambassador for Aberdeen City and Shire due to her extensive efforts to promote the area.