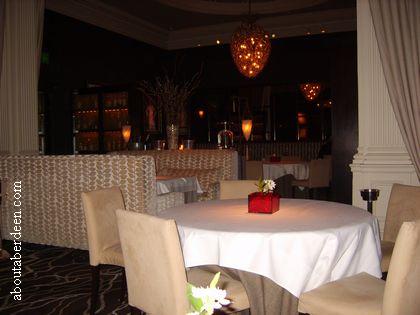 Eating at a Michelin Star Restaurant is such a treat in every sense. There is the visual aspect of immaculately laid tables, well presented and mannered staff, the relaxing music, the deliciousness of the food which are like works of art on a plate and the joy of experiencing new tastes on the palate from a fusion of foods. Aboutaberdeen have enjoyed eating at Michelin star restaurants throughout Scotland and below are our reviews: 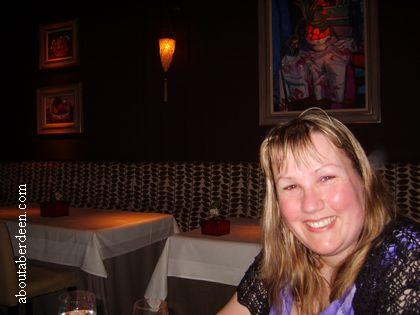 The Andrew Fairlie restaurant is located in the heart of Gleneagles and though there is disabled access to the Hotel complex there are about five steps down into the restaurant. There is a handrail and the Maitre de was such a gentleman and assisted the member of our group who had a disability.

We were warmly greeted at the Andrew Fairlie restaurant by the charming Maitre de with his friendly Yorkshire accent. This being our first visit to a two Michelin star restaurant we were not sure what to expect and the Maitre de was kind enough to chat to us about the menu, wine list and helped to select a bottle of champagne to suit our tastes.

It wasn't just the Matre de who was an asset to Andrew Fairlie, all his staff were efficient, polite, helpful and smart. It was such a joy to hear them explain each dish as it was served and offer their compliments for our dining experience, never seeming to use the same phrases twice. Glasses were filled within seconds of being drunk and the waiters and waitresses seemed to come from nowhere. So unobtrusive were the waiters that when Aboutaberdeen.com tried to take photos of the restaurant for this Michelin star restaurant review they were next to us offering to take group and couple photos! They certainly earned their 10% tip and more! So infectious were their genial smiles it was impossible to keep the cheesy grins of our faces for the photos on this Andrew Fairlie restaurant review. 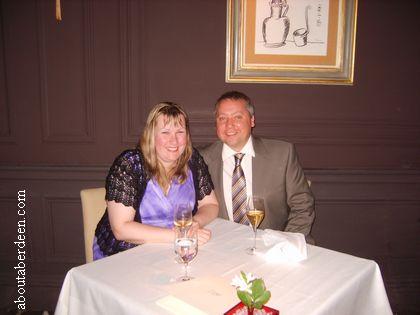 One lovely thing about this Michelin star restaurant is that the tables were well spaced so that you could not hear the conversations of the dinners in the other tables. The relaxing music was low and there was no noise from the kitchen. As expected from a two Michelin star restaurant there was spotlessly clean and well ironed table clothes and napkins and the cutlery and glasses on the table were spotless.


The Michelin star menu at the Andrew Fairlie restaurant are fixed prices and there is a choice from three menus: the A La Carte, Degustation and Du Marche. The menus change during the seasons to allow the chefs to use the freshest of ingredients and these are sourced as locally as possible.

Puddings and desserts from the A La Carte menu included a selection of French Artisanal cheeses or tart tatin, Madagascan vanilla and cinnamon ice cream (for two people) or pumpkin cake, muscovado mousse, salted caramel popcorn or soufflé, cream, mousse, sorbet, spices or green matcha tea parfait, grapefruit and yuzu sorbet or caramelised banana, peanut butter mousse, sesame biscuit. At the time of this Andrew Fairlie restaurant review the A La Carte menu cost £75 for 3 courses with a £10 supplement for specific choices such as the lobster. Cheese in addition to dessert cost £10. Coffee and chocolates was charged only for the A La Carte menu and would have been £5.

The Degustation menu is a set menu of 7 courses which must be taken by all the table guests. It is a bit more expensive than the A La Cart Menu at £95 and gives the diner a taster of different dishes. As an example of what to expect from the Degustation menu on the night aboutaberdeen.com visited the Andrew Fairlie restaurant there was Ballottine of Duck Foie Gras, Almond Jelly, Toasted Brioche and roast langoustines baby artichokes, fennel puree and mushroom consommé cep cream, truffled ravioli and roast halibut brown butter and fillet of wild venison macaroni gratin and caramelised banana peanut butter mousse and coffee and chocolates.

The Du Marche menu costs £85 for each diner and as with the other menus gives guests a stunning taste of why Andrew Fairlie and his team were awarded two Michelin stars . It consisted of pressed confit chicken ham hock pickled onions grain mustard and fricasse of morels, mousserons languoustines and torellini of pork cheek, chorizo asparagus veloute, roast fillet of turbot surf clams, parsley butter and Gressingham duck spiced roulade of duck leg and carpaccio of rhubarb lychee rose sorbet, white chocolate cream and coffee and chocolates.

Though courses in the Degustation and Du Marche menus are described as little tasters they were generous portions. We have eaten in several Michelin star restaurants and Andrew Fairlie's was the first that we left with a full tummy and the feeling of having had generous portions rather than small pretentious dishes.

Each course was remarkably presented down to the last intricate detail. It almost seemed a shame to break up this cuisine artwork with our forks and knives but we were glad we did. We all agreed that the food was full of different blends of flavour and cooked to perfection demonstrating the chef's love of food as well as his talent with ingredients. Between courses there was complimentary dishes such as sorbet and a rather tasty cold beetroot soup. The meat and fish portions were generous portions which would have satisfied the most hungry of appetites. There was a wide choice of teas and coffees after the meal and we loved the choice of hand made chocolates after the meal which included brave choices such as basil or lime and chilli which sounded strange but left the table craving more.

The opening times of the Andrew Fairlie restaurant at Gleneagles in Auchterarder are from 7pm until 10pm Monday through to Saturday though the 10pm is for last reservations and the staff seemed happy to serve our table and several others late into the night. We left at about half past midnight and other guests were still being served. The restaurant is closed on a Sunday.

At just over a two hour drive from Aberdeen a return visit to the Two Michelin star Andrew Fairlie restaurant is a must for any special occasion.

If you would like to add details or photos to this Michelin Star Restaurant review page then please contact AboutAberdeen.


Andrew Fairlie was a mentor for the Masterchef Professionals TV programme on BBC One in 2012. During this time he assessed Ollie and Kim at Gleneagles where they made the fish dishes.


In January 2011 chef Andrew Fairlie joined a team of climbers where he cooked haggis, neeps and tatties at the summit of Mount Kilimanjaro. Read more about this event that celebrated the birthday of Robert Burns on the About Aberdeen Burns Night page.