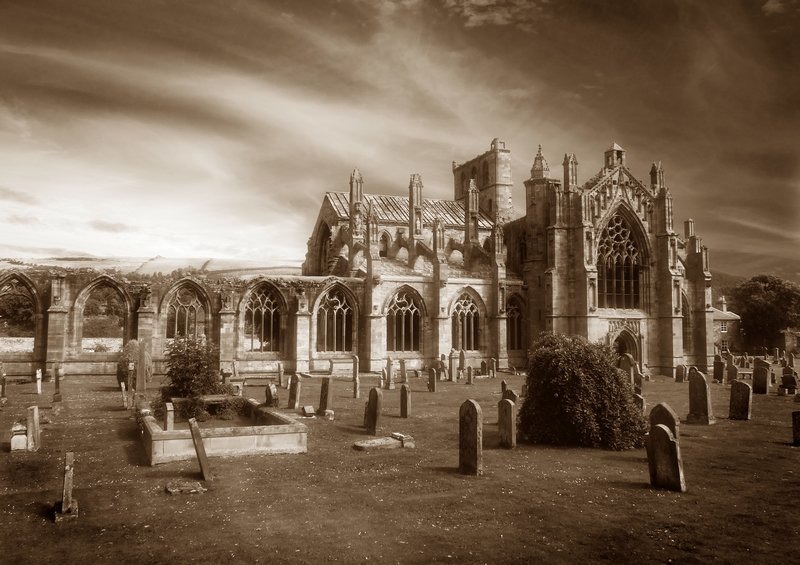 There are three Melrose Abbey ghosts that are still said to haunt the ruins in the borders of Scotland:


A group of monk ghosts have been witnessed walking in the area.


In life Michael Scott was a philosopher and wizard who practised black magic and the black arts. It was said that he could fly. He is buried at Melrose Abbey and is said to haunt his grave. His stone coffin was thought to have been found in the aisle of the south chancel in 1812.


A mysterious figure has been witnessed sliding along the grounds of Melrose Abbey.


Vampire Monk
One of the Abbey's monks who was a bit evil in life returned from the dead as a vampire. It was said that he would rise from his grave at Melrose Abbey and feed at the local nunnery. One night a brave monk kept vigil at his tomb and when the vampire monk climbed out to feed he chopped his head off with an axe. This killed the vampire monk but his evil presence was thought to remain at the Abbey for some time. Some say they can still feel his evilness.


Melrose Abbey was founded in 1136 by Cistercian monks on the request of King David I of Scotland. The Abbot or Commendator of Melrose headed the Abbey. A previous Monastery had been built in the 6th century about two miles away which had been dedicated to Saint Aidan. This was destroyed in the year 839 by Kenneth the I of Scotland. One of the Abbots was St Cuthbert who left for Holy Island in Northumberland. King David I had wanted to build Melrose Abbey on this land but the Cistercians persuaded him against this because the land was infertile and the eventual site for Melrose Abbey made better farm land.

Building work to the East End of Melrose Abbey was finished in 1146 and the other buildings were completed over a 50 year period. These buildings formed the shape of a St John's cross. Melrose Abbey became the mother church of the Cistercian order in Scotland. On the 28 July 1146 the church of the convent was dedicated to St Mary.

Many Scottish Kings throughout the centuries have been buried at Melrose Abbey. This includes Alexander II.

A town grew around Melrose Abbey and was therefore named Melrose. The motto of the town of Melrose was taken from an inscription on the Abbey staircase by the master mason John Morow. It read Be halde to ye hende. This translates to Keep in mind, the end, your salvation.

Melrose town was attacked by the army of Edward II in 1322 and most of the original Melrose Abbey was destroyed. King Robert the Bruce helped to rebuild Melrose Abbey.

The embalmed heart of Robert the Bruce was laid to rest, encased in lead, in the Melrose Abbey grounds whilst his body is buried in Dunfermline Abbey. During archaeological excavations centuries later in 1996 a conical lead container was unearthed. It had an engraved copper plaque which indicated earlier unrecorded excavations. It read The enclosed leaden casket containing a heart was found beneath Chapter House floor, March 1921, by His Majesty's Office of Works. As no other heart had been recorded as being buried in Melrose Abbey it was thought that this was the heart of Robert the Bruce. It was reburied on the 22 June 1998 and a plinth covers the burial site.

The army of Richard II burned down Melrose Abbey in 1385 as his troops were hunting down David II of Scotland and his army.

Over the next 100 year Melrose Abbey was rebuilt and records show that it remained unfinished during the visit by James IV in 1504.

Melrose Abbey sustained damage by the English army in 1544, and was never repaired, during fighting over marriage proposals between the infant Mary Queen of Scots and the son of Henry VIII. This damage marked the decline of Melrose Abbey as a working Monastery. The son of James V, James Stuart, was the last Abbot. James Stuart died in 1559 and the last monk died in 1590.

During the English Civil War Melrose Abbey sustained canon fire damage by the troops of Oliver Cromwell to some of its walls. This damage can still be seen today. During these Reformation years Melrose Abbey lost much of its land when they were seized by the crown or passed onto nobles, much of which went to the Buccleugh family.

Melrose Abbey is now owned and managed by Historic Scotland. Visitors can see the ruins which still contain fine examples of decorated masonry and well preserved figure sculptures some of which include likenesses to saints and images of dragons and gargoyles. There is a museum which contains relics of the Abbey and this is housed in a building which dates back to 1590.