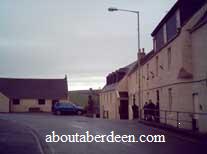 Visitors to the picturesque village of Oldmeldrum will find a friendly welcome awaits them at the Meldrum Arms Hotel where they have mastered the balance of combining modern cuisine with traditional Scottish cooking.


There is a free car parking next to the Hotel and several free car parks in the village. Strolling through the village brings you to some quaint shops including an olde sweet shop and a family butcher.


The Meldrum Arms Hotel is a listed building which adds to the charm of eating here. At the entrance is a statue of an old fashioned sailor with smoking pipe and beard. This was brought back from France Centuries ago by a former owner of the Hotel and is now a listed monument. You can read more about it and see a close up picture here.


The bar is fully licensed and sells a wide range of alcohol and non alcoholic drinks as well as teas, coffees and a rather creamy delicious hot chocolate.


The waitresses are cheerful and efficient and the chef knows her way round the food and meals are soon cooked using fresh ingredients.


Children are welcomed and have their own menu and get a free activity sheet to keep them busy.

The starter menu has around 7 dishes including the soup of the day served with a hot roll or breaded mushrooms in a range of dips.


Main meals include sausages in onion gravy, steaks, lasagne, salads, filled rolls, baguettes or sandwiches, baked potatoes, mixed grill, curry's and pasta dishes. Dishes from Scotland include mince and tatties just like Oor Wullie's mum makes! All hot meals are served with a choice of potatoes or chips and fresh vegetables. There is also a special of the day such as roast lamb.


A visit to the restaurant on a Sunday brings the experience of having a roast dinner laid on a platter for the family to carve and serve. A great idea for everyone to get just what they like and giving the impression of being at home without the chore of cooking or the dishes!


Puddings and Sweets from the menus include traditional puddings such as upside down pear pudding with custard, apple pie with cream and a range of ice creams, cakes and tarts.


Portions are large and the waitresses bring a range of sauces to accompany each meal. The tables have proper linen table clothes and the interior is tastefully decorated and forms a relaxing setting. There are a few steps to negotiate inside the Hotel and we did not see any disabled access.


Nearby attractions include the Glen Garioch Distillery.