- Play bingo to win cash prizes and have fun.
Situated in the Berryden Retail Park town centre, the Mecca Bingo Aberdeen Club offers free membership to the bingo hall and facilities. In order to join you will need to complete an application form 24 hours form in advance. This then permits you to use the Mecca Bingo Clubs Halls in all parts of Scotland, such as Edinburgh, Dundee and Leith.
Alternatively play at the Mecca Bingo online site at www.meccabingo.com where you can claim a free £50 bingo game. 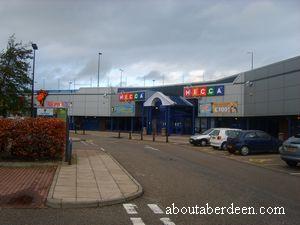 There is a licensed bar and food is available and there is comfortable seating to enjoy a relaxing drink or snack before or after bingo games.


The foyer contains many slot machines which you can play for cash prizes.


There are disabled facilities.


There is a large free car park just outside the hall.


Address, Telephone Number And Website Of The Mecca Bingo Hall In Aberdeen


In 2005 one of the Aberdeen Mecca Bingo Hall's callers won the Scottish Bingo Caller Of The Year Award and featured on a BBC TV programme. Read about him.

Mecca Bingo Aberdeen at Berryden shopping centre now have a new table service which was introduced in April 2010. This means that the staff will bring your food and drinks to tables so that you do not miss any Mecca bingo game numbers being called. Mecca Aberdeen also introduced a new separate social lounge.

Binglo is a fun way to play bingo in the dark each Saturday night at Mecca Bingo in Aberdeen after 9:30pm. This amusing bingo party allows bingo players to use special glow in the dark daubers whilst the Mecca Bingo Aberdeen staff play special music and use lighting during the after dark binglo. There are special prizes to be won at the after dark binglo which can include a Borat Mankini, senz stealth umbrella, slanket, pogp instant photo printer and vuzix iwear.

After Dark Binglo also takes play at the Mecca Bingo halls in Beeton in Nottinghamshire, England, Catford near London and Oldury in the Midlands.

We are very excited to be joining forces with one of the UK’s most successful TV brands, in the first deal of its type for meccabingo.com. This deal will give us exposure to a new audience, including the opportunity to promote meccabingo.com to Britain’s Got Talent fans. It will also enable us to enhance our offering to our existing customers. For example we will be able to give them the opportunity to win some fantastic prizes including trips to Britain’s Got Talent auditions and live shows.

We are delighted to be building this long term partnership between meccabingo.com and Britain's Got Talent. Last year's series final was the most watched show on TV in 2009 and we are looking forward to building on that success in 2010 and beyond. These types of deals are crucial in extending the brand successfully beyond the TV screen.

Britain' Got Talent is one of the most popular TV programmes on STV in Scotland and on ITV throughout the UK. Britain' Got Talent is the highest rated entertainment show of the noughties and won an audience of 18.3 million viewers for the finale of series three where Scot’s lass Susan Boyle shot to fame. This figure is almost one third of the total UK population. Series three of Britains Got Talent was the UKs highest rated series of 2009 wining an average audience of 13.3 million viewers and a share of 52.8%. Over the course of the series, 43 million people tuned into Britain’s Got Talent - this represents 76% of the total UK population. Series on series the average audience for Britain’s Got Talent rose by 30%. Scottish singer Susan Boyle helped raise the popularity of the ITV1 show Britain?s Got Talent when it became an international phenomenon in 2009 with over 200 million internet views of her initial audition.

Mecca's Got Talent will include singers, dancers, jugglers, impersonators - basically anyone who can get on stage and keep an audience entertained.

The winning club act of Mecca's Got Talent will receive a pair of tickets to the live Britain's Got Talent tour and be invited to compete in a regional semi finals event. If they are lucky enough to make it through the semi-finals, they will then compete against other winners from Mecca clubs across the UK in the national finals event. The finals event will take place on 4 September 2010 at Mecca Bingo in the Midlands, with TVs Lorraine Kelly as host.

Lorraine Kelly says, I'm thrilled to be part of Mecca's talent search. Britain's Got Talent is a fantastic show and I'm sure Mecca's Got Talent will be just as exciting and entertaining. Who knows, we might even find the next Susan Boyle!

In addition there is also Mecca's Got Talent Online at the Meccabingo.com Facebook fan page whose link can be found at www.meccabingo.com There you can upload your home made videos hosted through YouTube. Mecca will then choose the best five talent videos and Mecca bingo customers can vote for their favourite. The two with the most votes will go through to the Grand Final and meet Sunday Post columnist and TV star Lorraine Kelly. The first place winner will win a £3,000 cash prize and be given the chance to perform live at Wembley Stadium in May 2011.

In September 2010 Mecca Bingo introduced a new promotion called Mecca Moment which is based on that special feeling you get when you win at Mecca: A Mecca Moment. There was also a special TV Ad where Mecca players described their own Mecca Moments or what would they do if they won at Meccabingo.com

Mecca Moments also appeared on internet media sites such as Facebook, Twitter, Flickr and YouTube. One lucky person had the chance to have their Mecca Moment dream come true. There was also other weekly prizes such as £50 online free play and £50 cinema vouchers.

The Mecca Moment finalists were announced in November 2010 following the recent social media campaign launched by Meccabingo.com to find out what the nation’s ‘Mecca Moment’ would be. The finalists are:

Lisa Frame who said: “ My Mecca Moment would be to use the money to go away with my husband. He is in the army and we had to cancel our honeymoon due to him having to go to Afghanistan and we have not been able to afford one since.”

Laura Louise Brine: “ My Mecca Moment would be to join the local gym to lose my tyres and buy myself a new wardrobe to go with the new body!”

David Roberts: “My Mecca Moment would be to get down on one knee and surprise my girlfriend with the BIGGEST diamond ring she has ever seen and pop the question, just to show her how much I appreciate her and love her.”

Mandy Webb: “My Mecca Moment would be to put a deposit down on a flat for my 3 eldest to move out of home so they don’t keep hogging my laptop lol while I’m playing Mecca lol! Or enough to buy them a laptop each!”

Catherine Pope: “My Mecca Moment would be getting Madonna to come and sing at my 40th birthday in December as I've been a lifelong fan!!! That would truly be a marvellous, magical Mecca Moment.”

The five finalists and their Mecca Moments’have been uploaded to the Mecca Bingo Facebook fan page at www.facebook.com/meccabingo - and Mecca Bingo is now asking Customers and bingo fans to vote for their favourite by clicking on the Facebook‘Like’ button. The ‘Mecca Moment with the most votes by Sunday, 19th December will win &pound2,000 to help their dream come true!

Launched in October across Facebook, Twitter, Flickr and YouTube, Mecca Bingo has been asking Customers to upload their ‘Mecca Moments’ via these channels. ‘Angus Nisbet Gaming Director for Meccabingo.com, comments: “The responses have been overwhelming. We have had everything from the funny, to the bizarre, to the truly heart warming and we would like to thank everyone that has participated”.

In March 2010 Mecca bingo had a daily £10,000 giveaway jackpot where one £10,000 prize was guaranteed to be won each day. Mecca bingo website also launched new games which included Deal or no Deal, Rainbow Riches, Cleopatra and Clover Rollover.

Mecca Bingo Aberdeen players joined the nationwide group of bingo players taking part in the £10,000 Daily Jackpots which saw 30 winners in the first few weeks. So popular has this bingo game been that meccabingo.com have extended the bingo promotion through to the end of March 2010. Two lucky bingo winners have won twice. One such lucky bingo player uses the username of divorcedatlast and comes from East Kilbride in Scotland. He had only recently joined www.meccabingo.com and won the £10,000 jackpot in February and March: He said I love playing online bingo because it is just so easy. You can sit and have a cup of tea and relax whilst playing. Since joining MeccaBingo I have been very lucky indeed! It still has not sunk in that I have won the £10,000 Jackpot twice. I was not watching the first time around and wondered who all the roomies were congratulating! The second time I was on the phone to a friend when I saw my name flash up. Neither of us could believe it! My youngest daughter turns 18 soon and my eldest turns 21, so this will go towards something extra special for my children.

MeccaBingo user Winformeplease from Sheffield in England was the first £10,000 jackpot winner. She has been a MeccaBingo player for over three years and went on to win another £10,000 a few weeks later. She told MeccaBingo I am absolutely surprised! I was just playing because I like bingo and certainly did not expect to win the first time never mind again! We have decided to really treat ourselves and my partner and I have bought a new car, computer, all sorts for the house and have of course treated our three children.

Visitors to the Mecca Bingo Hall in Aberdeen are encouraged to bring along any unwanted foreign coins. From the summer of 2009 the Mecca bingo Aberdeen staff are collected these overseas coins and notes for the charity Whizz-Kidz which ensures disabled children receive specially customised wheelchairs and other mobility aids

Dancing Queen is an afternoon and evening bingo room at Mecca Bingo and opens from noon until 11pm daily. Dancing Queen also has great jackpots, BOGOF offers between 3pm and 6pm and two free games a day!


Key To The Door

Lucky For Some is a popular bingo room at www.meccabingo.co.uk and opens from 6pm until 11pm.

Lucky 7 bingo room at meccabingo.co.uk is a 75 ball bingo room that stays open 24 hours a day. Each bingo game of Lucky 7 has five winners to share the bingo pot. Each hour there is also a 1p bingo game in the Lucky 7 room and each evening at 10pm there is a £500 bingo game.

In addition to the £100,000 Mecca Monster Bingo Game MeccaBingo had other March 08 promotions such as the £2k Mecca Mayhem game which took place every night at 10pm and only cost £1 a ticket. One hour later, at 11pm, there was the Mecca Monster Freebie which was a free bingo link up game. This free bingo game had a guaranteed bingo pot of £1,000. Other Mecca Bingo link games took place every hour on the hour with some fantastic prizes available to those who play online rather than at Mecca Bingo Aberdeen.