Biography of Aberdeen author Lance Black and information about his first novel Direct Action and where to buy the book:

Terror is the second novel by Lance Black. It is set in Aberdeen and Puerto Banus, on the Costa del Sol where Acting Chief Constable Ross is investigating a mysterious threat to the Prime Minister. Amongst the sun and glamour he soon reveals a plot that can threaten Scotland. Terror will be released on the 1st December 2008 Buy Now.

An experience as the victim of crime motivated Lance to become a writer. He was waiting at a set of traffic lights in Aberdeen with his girlfriend. Four men set upon his car and tried to goad him to get out of his car for a fight. Fortunately no harm came to Lance or his girlfriend, though his car was badly damaged by this unprovoked violent attack. 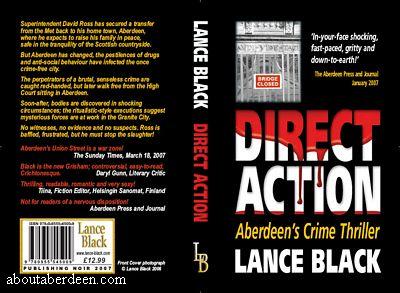 His first novel, Direct Action, was published by online book store like Amazon in November 2006 in a private print run of 5000 copies. Direct Action went on sale in July 2007 locally in Aberdeen and sold 500 copies within the first two weeks. It then made number two on the WH Smith Scottish list of top books. Direct Action by Lance Black is a fictional book set in the Granite City using locations such as Ferryhill. This gritty book, loosely based on real life events, is suitable only for those aged over 18 years. Direct Action deals with the under belly of society involving graphic accounts of anti-social behaviour such as violence, boy racing, drug abuse, road rage, alcohol abuse, dangerous dogs and the violent crime that goes on in a big city such as Aberdeen.
The secret life of Aberdeen features heavily in Direct Action and characters include oil millionaires, seedy lawyers, paedophiles and vigilantes. Add in a bit of sex and you have an eye opening book written for adults.
The main plot surrounds a violent murder and Lance draws upon his legal experience to write in a legal loophole that could see the murderer go free and unpunished. Zero tolerance could be the answer...


The cover of the novel Direct Action is a photograph of Wellington Bridge in Aberdeen, one of the scenes of his book. Other Aberdeen areas to feature in Direct Action include the Pitfodels Hotel in Royal Deeside.

Lance Black hopes to take the screen script of Direct Action to Hollywood in the hope of seeing the screenplay made into a film.

Lance Black now lives in the West End of Aberdeen . The official website of the Aberdeen author Lance Black can be found at https://www.lance-black.com/

Direct Action by Lance Black is also available to buy online at www.lulu.com


In 2005 Lance Black published a book for men called Memoirs Noir - A Guide For Men which was aimed at male orientated humour with topics of cars, golf, holidays and the law. More Information

Lance Black is now writing his second book which is provisionally called Terror. It is set in Puerto Banus on the Costa del Sol. It is hoped to be published in 2008.

The official Lance Black website can be found at www.lanceblack.co.uk