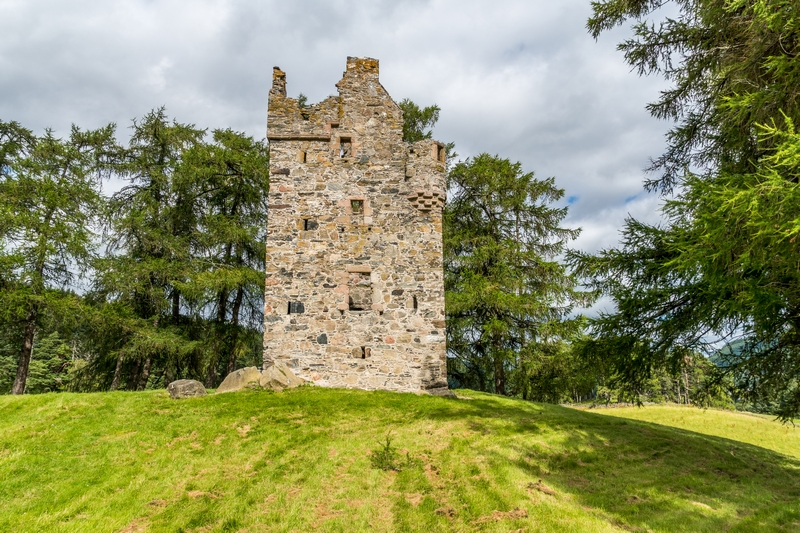 Knock Castle near Ballater in Royal Deeside, Aberdeenshire, Scotland dates back to the 16th Century. Knock Castle was the Tower House home of the Gordons family. They fought with the neighbouring Forbes clan and at times it was a bloody feud which saw Henry Gordon killed in a raid by the Forbes and Clan Chattan. Knock Castle was then inherited by Alexander Gordon. Things came to a head when one of the Gordons sons secretly married a Forbes girl. The father of the bride had him killed and to prevent any repercussions he had his seven brothers killed as well whilst they were digging peat. They were then beheaded and their heads were spiked to their spades.


Their father, Alexander Gordon, fell to his death down the Knock Castle stairs when he heard of the murder of all his eight sons. It is said that he is the Knock Castle ghost that still haunts the ruins of the castle.

Gordon of Abergeldie who was a deputy for the Earl of Huntly convicted Forbes of Strathgirnock for murder and he was executed and his lands given to Abergeldie.

The Hall of Knock Castle was situated in the first floor and there was an enclosed courtyard and vaulted basement. It was built at the top of a hill close by Glen Muick giving the Gordons a strategic outlook.

Knock Castle is now a ruin standing at four storeys though without a roof but it is hoped that Knock Castle could be restored. Knock Castle is owned by the Balmoral Estate and Prince Charles the Duke of Edinburgh has shown interest in restoring Knock Castle to its former glory. Knock Castle near Ballater is close to the Birkhill retreat that is used by Prince Charles. The Prince's Regeneration Trust has been approached with a restoration project under its scheme that restores redundant buildings that are of architectural or historical importance.

Knock Castle is currently cared for by Historic Scotland and can be found by Knock Farm.