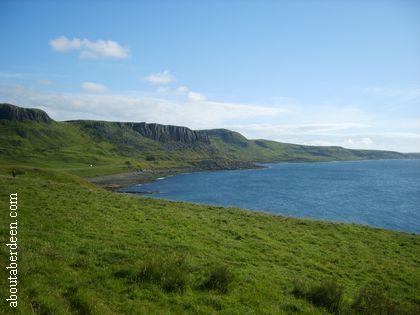 The Isle of Skye is famed for its romantic and picturesque hills with rugged ridges and its remote coastline and sea lochs. The Red Hills (or Red Cuillin) and Cuillin (or Black Cuillin) are the most well known ranges with the Old Man of Storr a well known feature. Before aboutaberdeen gives you a modern overview of the Isle of Skye Scotland with places to visit and tourist attractions we begin with a brief history of the Isle of Skye. 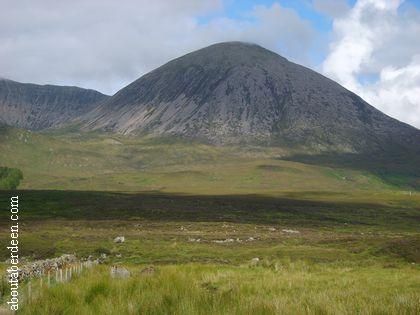 Early settlers on the Isle of Skye can be traced back to the Stone Age and early farmers. As time progressed settlers built hill forts before constructing smaller buildings known as duns. From the Iron Age round fortifications called brochs were built and some remains can still be seen such as at Dun Borrafiach (cited in the book Isle of Skye (Collins Rambler's Guides)

by Chris Townsend) and at Dun Beag.

In 1263 the Scots finally defeated the Vikings at the Battle of Largs and ended their occupation. Three years later the Isle of Skye became part of the Hebrides and Scotland (cited in the book Isle of Skye (Collins Rambler's Guides)

Peace did not come easily to the Isle of Skye though and there was much Clan fighting, most of which was between the MacLeods and the MacDonalds. This did not end until the last battle at Coire na Creich in the Cuillin after which James VI intervened and forced the Clan Chiefs to accept arbitration. 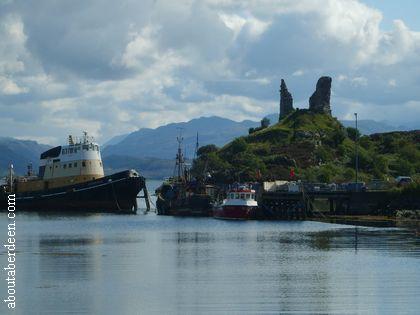 During the Jacobite Uprising of 1745 the Clans MacLeod and the MacDonald did not support Bonnie Prince Charlie and his Jacobites so did not suffer too badly post Culloden. Bonnie Prince Charlie did travel to the Isle of Skye after the Battle of Culloden whilst fleeing from the Government troops though and was helped from South Uist to the Isle of Skye by Flora MacDonald whose grave can be seen in the photo on the Skye Museum of Island Life page. She rowed him across the sea with the young pretender dressed as a maid and this is remembered in the Scottish song Skye Boat Song. Famous versions were sung by Calum Kennedy and the duet between Roger Whittaker and Des O’Connor. Bonnie Prince Charlie also gifted his recipe for his favourite liqueur drink to the MacKinnons for their hospitality whilst in hiding. It later became known as Drambuie whose home is said to be the Broadford Hotel (cited in Isles of Skye and Raasay (Landmark Visitors Guide)

The sea cave that Bonnie Prince Charlie is said to have hidden in for six days before his journey to France is thought to be near Elgol and can be reached at low tide.

Poor potato crops blighted the Isle of Skye in the 1830s through to the late 1850s and this caused problems with landowners and those paying them rent. For example the 25th Chief of the MacLeods was forced to leave Dunvegan Castle because he could no longer provide work or food for his tenants. He had to sell off Clan land and seek work in London. 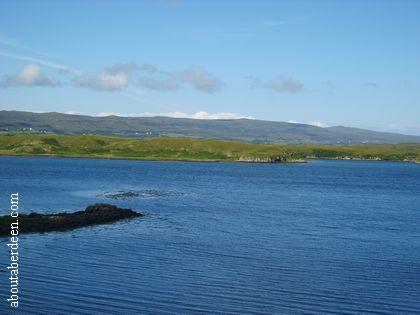 As a consequence of the potato famines landowners had to find a new source of finance and soon realised that sheep was a better source of money. Land was turned over to sheep grazing which meant many crofters had to be evicted at a time known as the Highland Clearances. The book Isle of Skye (Collins Rambler's Guides)

by Chris Townsend describes two walks through two villages that were destroyed during the Highland Clearances, Suisnish and Boreraig. The low walls of the buildings indicate that the common practice of burning homes to ensure the crofters did not return was performed. Many families were taken against their will and often in chains to ships in the Lochs to go to the New Worlds. Many died from small pox during the long voyage (cited in Isles of Skye and Raasay (Landmark Visitors Guide)

by Glenn Heritage). Others saw this as a new opportunity and went willingly to a new life in Australia, Canada and the United States.

by Glenn Heritage gives the population in the year 1800 as almost 50,000 people whilst in 2008 it was between 10,000 and 12,500. Tourism and particularly bed and breakfast and other hospitality could be argued to have become a modern day crofting in terms of employment. Approximately 400,000 visitors go to the Isle of Skye each year according to Skye and the Western Isles: Scottish Islands

Some crofters did remain on the Isle of Skye though and the Napier Commission and the Crofting Act of 1886 gave them more rights such as a security of tenure. Their way of life, examples of buildings and machinery is preserved in the Skye Museum Of Island Life.

Sheep remain the main source of income for farmers and landowners. The sheep seem to have the roam of the land and there are few fences along the roadside. So it is not unusual to find sheep and cattle walking along the roadside and in the case of hot tarmac, lying down on the road enjoying the heat! 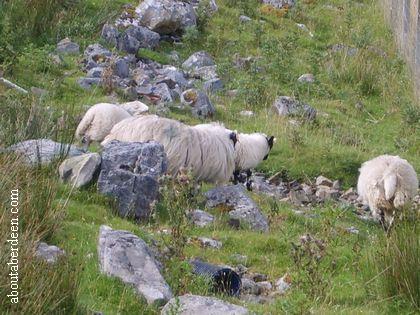 Other notable wildlife on the Isle of Skye are roe deer, red deer, otters and seals whilst porpoises and dolphins can often be spotted offshore as can the rare basking shark or minke whale.

Bird watchers and botanists find the Isle of Skye a pleasure to visit. There are special boat trips such as SkyeBoat Trips at Portree Harbour to help you spot the sea eagles. Your boat trip may also include a trip to nearby Isle of Raasay. Other birds of interest on the Isle of Skye include golden eagles, the white tailed eagle, buzzards, corncrakes, osprey and falcons.

Sadly the wildlife common on the Isle of Skye also include the annoying midges so you may wish to purchase a reliable insect repellent before your journey.

The Isle of Skye is popular with hill walkers, climbers and mountaineers. The book Isle of Skye (Collins Rambler's Guides)

by Chris Townsend has a detailed guide of 30 walks to be enjoyed on the Isle of Skye. Each walking guide includes the distance, estimated duration, highest points, nearest toilets and places to eat and a detailed walk through each trip with photographs. There are many bunkhouses and youth hostels on the Isle of Skye offering excellent facilities such as showers and kitchens and affordable overnight accommodation to suit most budgets. 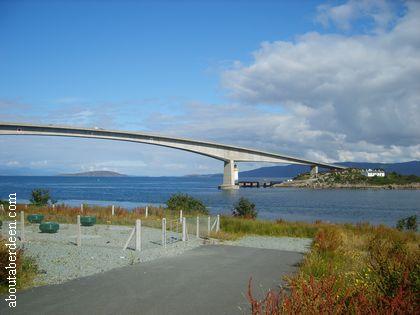 by Stephen Whitehorne) or Misty Isle. Anyone who has had the pleasure of staying on Skye will know that this nickname comes from the low lying mist that can add extra beauty to the hills.

It is also known as An t-Eilean Sgiathanach, the Winged Isle (cited in Isle of Skye (Collins Rambler's Guides)

There are few petrol stations and public toilets on the Isle of Skye. Aboutaberdeen recommend fuelling and taking a comfort break at any opportunity such as at Broadford. One of the charms of the Isle of Skye is that road signs are in English and Gaelic. Many roads are narrow and have passing places. These are not intended to be places to stop your car and take photos as many a tourist has been seen to do! Please do pull over and let other vehicles pass if you are driving slowly so that your passengers can admire the views. 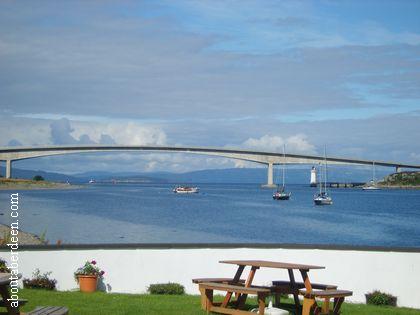 The Isle of Skye road bridge opened in 1995. It was quite controversial because motorists had to pay a toll. Many preferred to use the Kylerhea Ferry from Glenelg or the Mallaig to Armadale ferry which were a bit cheaper at the time. The Isle of Skye bridge has now been payment free since December 2004 when it came into the ownership of the Scottish Government.

The capital town of the Isle of Skye is Portree. Its Gaelic name is Port an Righ which translates to the King's Port. It was previously called Kiltraglen but was changed after a visit by King James V in 1540. He anchored his fleet of warships in the harbour whilst he began talks with the Clan Chiefs to ask them to swear an oath of loyalty.

The regions of the Isle of Skye are Sleat, Minginish, Duirinish, Waternish and Trotternish.

Below are our links to full reviews with photographs of tourist attractions, restaurants and places to stay all of which have been visited by aboutaberdeen.com

Other area of interest on the Isle of Skye yet to be explored by the Aboutaberdeen.com team include:

The book Isles of Skye and Raasay (Landmark Visitors Guide)

by Glenn Heritage describes the origins of the large standing stones at Port na Fagaich (the Bay of the Forsaken Ones) near to Ardvaser. These large stones can be seen near to the shore and there is a legend told about them. It is said that some fishermen went to the shore when they heard splashing. In the light of the moon they saw a group of seal maidens swimming in the sea. The seal maidens had removed their sealskins and they looked beautiful. One of the fishermen took away their sealskins whilst the other fishermen comforted the distressed maidens. This led to their marriage and each couple lived happily for one year. By the end of the year the seal maidens could no longer resist the call of the sea and they each returned. The fishermen tried to hold them back onto the land and entered the shore. Each fisherman was turned to stone and they have stood there to this day. The legend of the seal maidens of Port na Fagaich says that if you go there in soft moonlight you can see the faithful seal maidens return to their stone husbands.

Aboutaberdeen shall return one night to take photos of the stones and let you know if we glimpse the seal maidens of Port na Fagaich.

The Skye Serpentarium is located in Broadford just before the Creelers Restaurant which About Aberdeen are saving for when we take the children on holiday to the Highlands of Scotland or the Isle of Skye.

The remains of St John's Chapel can be found near Loch Caroy. The ruins of this Episcopal Church and Graveyard is thought to still be haunted since it was built on a prehistoric burial ground and fairy ground. Fairy songs have been heard. St John's Chapel was named after Saint John the Baptist.

by Glenn Heritage that it travels through Glen Drynoch at night. Motorists have reported seeing headlights of an oncoming car which disappear as it is approached. The author has been unable to find the origins of this ghost car.

The Otter Haven is being saved for when we return to the Isle of Skye with our kids who love otters. 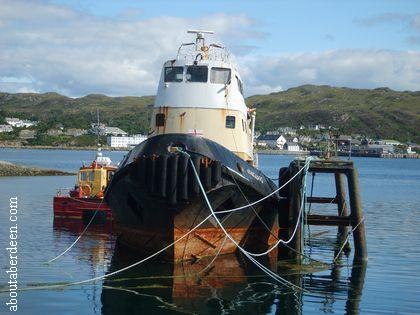 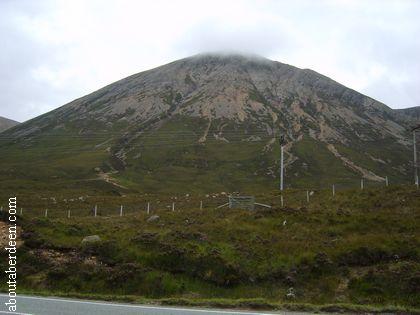