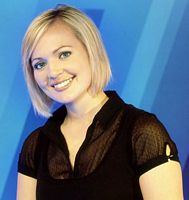 ITV, Channel 5 and Grampian Television North Tonight Reporter and Presenter Isla Traquair started her journalist career working for free for at Northsound Radio and a press agency whilst holding down an evening job and going to school for the other four days a week.

During this work placement and at the age of 15 years, she wrote a front page story in a national paper about job losses due to the beef crisis.


Isla Traquair then went to work for Aberdeen Journals. During this time she undertook their in-house training scheme and followed this with a year and a half apprenticeship at the company's weekly paper. A job at the Press and Journal daily newspaper soon followed where Isla Traquair worked as a general reporter. Here she learnt her journalism craft and soon moved onto became a leading newspaper journalist, specialising in crime and court reporting. She stayed there for just under 5 years before progressing to TV journalism.


Buy.o.logic is a new lifestyle TV show researched, written and presented by Isla Traquair and will be broadcast on the Canadian channel The Oprah Winfrey Network. This 13 part series will see Isla and guests, who will include medical experts, investigate health matters and evaluate health products. Isla Traquair and Buy.o.logic guests will also demonstrate how lifestyle and health products affect the body and discuss topics that viewers in Canada may be too embarrassed to approach their doctor or nurse about.


In the summer of 2008 Isla Traquair took over as the Channel 5 newsreader when Natasha Kaplinsky went on maternity leave. Many newspapers reported comparisons to Kirsty Young. Also presenting the 5pm to 7pm news with Isla Traquair from June 2008 was Matt Barbet. Isla Traquair has been with Channel5 since February 2008 until the autumn of 2009.

In 2005 she presented Grampian TV series, Unsolved: Getting Away With Murder.


In 2006 Isla Traquair left Aberdeen to work for National TV station ITV. She rose to prominence when she interviewed with great sensitivity the families of the murdered women in Ipswich, Suffolk in England in December. This included a moving interview with the boyfriend of a murdered victim. Five women who worked the streets of Ipswich were murdered and the crimes were known as the Suffolk Slasher Murders.

About Aberdeen would like to thank Isla for the Isla Traquair pictures above.