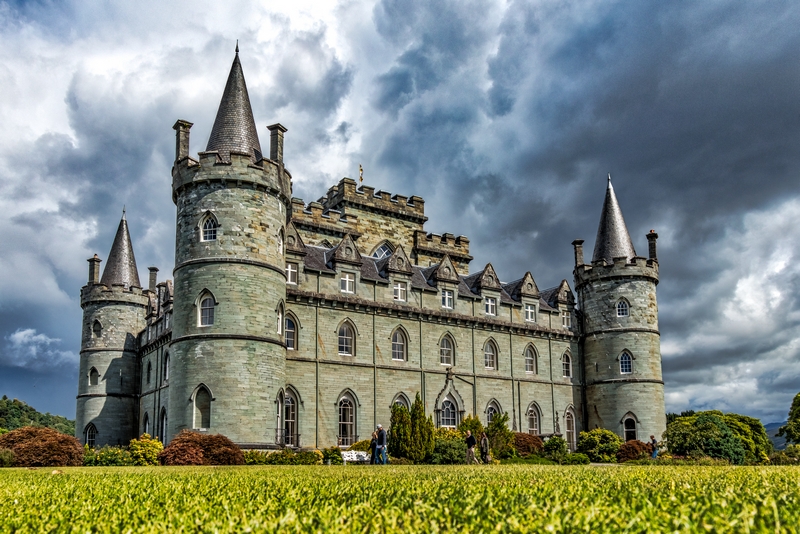 Inverary Castle can be found in Scotland between Glasgow and Oban. It sits by Loch Fyne. Inverary Castle has been the seat of the Dukes of Argyll since the 1400s and though some of the rooms and garden are open to the public in the summer months it remains a family home. Visitors can tour the gardens and the main reception rooms and some of the bedrooms. They may even get a glimpse of the Inverary Castle ghosts and see a haunting...


The first of the Inverary Castle ghosts is the phantom harpist ghost. The Duke of Argyll was driven from his Castle in the year 1644 by the Marquis of Montrose. But the Duke's harpist was left behind. Some sources say the harpist was left behind as punishment for looking through the keyhole of the Lady of the castle. The Marquis of Montrose found the harpist and ordered him to be executed by hanging. Since his death the harpist has been seen roaming Inverary castle, playing his harp and dressed in the Campbell tartan.

Others say that the harpist was killed during the siege at Inverary Castle.

Whatever the true origins for the reasons for his haunting the castle he is known locally as the Harper of Inverary. He is a friendly ghost that appears more often to women and is rarely seen by men. His music can often be heard in various parts of Inverary Castle, especially the Library.


The second of the Inverary Castle ghosts involve a major haunting of the sight of a ghost battle. It was first seen by Sir William Bart, a Physician, on the 10 July 1758. He was walking the grounds of Inverary Castle with two other men (a friend and a servant) and all three witnessed the hauntings. It was also witnessed by two ladies at a later date. All narrate the story of looking to the sky to see a ghost battle taking place between Highland and French soldiers. The Highlanders were retreating after unsuccessfully attacking a French held fort and had to leave many dead comrades behind.

Weeks later the news came from abroad that a Highland Regiment from a British force of 15,000 men had lost 1994 men, of which 300 were Highland soldiers of the Black Watch Regiment, whilst attacking the French held fort of Ticonderoga in Canada.


A ghost ship has been seen on nearby Loch Fyne. It is a ghostly galley with three men onboard and looks like the ship that is pictured on the Campbells' coat of arms. Witnesses have seen it move up Loch Fyne and onto the shores and land and then disappearing into the land.

When the ghost ship of Loch Fyne is seen it is said to foretell the death of the clan Campbell Chief. It is thought that the ghost ship goes onto land to claim the life of the Chieftain. One Chieftain in the 18th century was said to have drunk poison after seeing the ghost ship come onto Loch Fynne.


The original Inverary Castle was built as a stronghold for the Campbell clan in the 15th century by Colin Campbell who was the 1st Earl of Argyll but it was burnt down by the Marquis of Montrose in 1644. The third Duke of Argyll build the Castle as we know it now in 1744. Early design drawings begin in 1720 and the first sketch was by Sir John Vanburgh who also designed Castle Howard and Blenheim Castle. He died in 1726 and his designs were developed further by Roger Morris. The original architect was William Adam, an esteemed Scottish architect at the time. It is an early example of the Scottish Baronial style of Castle with turrets and corner towers. The nearby town of Inverary was developed in the same era.

The architects John and Robert Adam remodelled the Castle in the 19th century for the 5th Duke of Argyll and then again after a fire in 1877 which had destroyed much of the upper floors. They were the sons of the original architect of Inverary Castle. An Armoury Hall was built and external conical caps added to the corner towers.

Another fire occurred in 1975 and a major restoration took place in the 1990s by the 12th Duke of Argyll.

Famous visitors to Inverary Castle include King James V in 1533 and Mary Queen of Scots in 1562.

In 1890 Inverary Castle was the first residence in Scotland to install electricity.


The Inverary Castle collection contains the dirk handle and sporran of Rob Roy MacGregor. Visitors to Inverary Castle can also view their collection of paintings and fine French tapestries. There are many weapons on display throughout Inverary Castle including claymores, cutlasses and pikes. There is also various Campbell artefacts and memorabilia throughout the Castle. This includes the Campbell family tree which can be seen in the clan room and some Campbell shields in the entrance hall and on the ceilings.

The Dinning Room is widely described as the finest painted room in Britain.