Photographs, history and information about the House of Dun in Montrose Scotland which was originally called Dun House


The House of Dun in Montrose is a beautiful Georgian Mansion House now owned by the National Trust for Scotland (NTS). It was originally called Dun House when it was built by the 13th Laird David Erskine in the 18th century. He was a Judge in the Scottish Court of Session and commissioned William Adam to build the Country Home Mansion Dun House in the 1730s. David Erskine wanted a Gentleman's seat in the Country which could be handed down from father to son. His ancestor, Sir Robert Erskine, bought the Dun Estate in 1375 and by the 16th century a Tower House was built. All that remains of this castle is an archway in the walled garden. 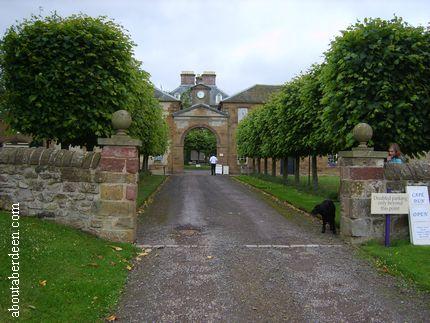 John Erskine Kennedy-Erskine and his wife Lady Augusta Fitz Clarence modernised the house about 100 years later and Dun House remained in the Erskine family. During World War Two Dun House was leased as a Country House Hotel whilst the last Laird lived in Broomly House.

The last of the Erskine's was Mrs Millicent Lovett (nee Erskine) who was the 21st Laird and had no heir so bequeathed Dun House to the National Trust for Scotland in 1980. Restoration work was started thanks to fund raising, grants and generous donations.

On the 12 May 1989 Her Majesty Queen Elizabeth the Queen Mother officially opened the House of Dun Montrose as part of her duty as the Patron of the NTS. There is a lovely photo of the Queen Mother at the entrance hall to Dun House. Aboutaberdeen is not sure when Dun House became known as the House of Dun but suspect it may have been around this time. Perhaps this was to prevent confusion with the Dun House on Schoolhill in Aberdeen. There are floor plans and more about the history of the House of Dun in Montrose in the NTS guide book available to buy at the start of the tour of the Mansion House in the vestibule. Photography is not permitted within the House of Dun so www.aboutaberdeen.com could only take pictures of the outside for this review. However the guide book has some stunning photographs of the House of Dun rooms and furniture.

As part of the restorations the ornate plasterwork on the walls and ceilings were restored. Visitors will note a violin within the pattern and an actual violin was plastered over by the original plasterers to achieve this look in the saloon and dining room. The original plasterer was Joseph Enzer. Marble and plaster busts of members of the Erskine family can be seen in alcoves within the walls. Many portraits of the Earls and their families line the walls throughout the House of Dun.

Many of the clocks and vases on display dated back to the 18th and 19th century.

The dining room and withdrawing room were originally intended for the Laird to entertain his guests and are sometimes used for marriage ceremonies and wedding entertainment. Though most furniture such as the dining table are original the chandelier is a reproduction.

Furniture of interest in the House of Dun includes chairs with the coat of arms of the Erskine family embroidered on the seat.

Climbing the staircase visitors to the House of Dun may find that there is low lighting. This is to preserve the interior, the paintings, carpets, etc from damage from artificial lighting. This is one of the reasons the Mansion House closes to visitors in the winter months though looks glorious in the summer sunshine. More portraits adorn the wall of the staircase and a china cabinet display is at the landing.

The first floor rooms include the Laird's dressing room which has an embroidered counterpane that was created by the wives at nearby RAF Leuchars. In addition to the 18th century mahogany gentleman's dressing table there is a leather armchair where the Laird used to sit and shave.

The next two rooms are Mr Erskine's bedroom and dressing room which contains a 19th century boot bath with tap at the foot. 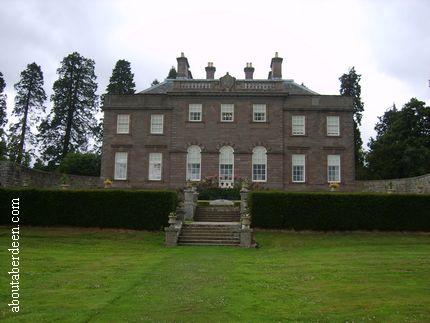 The next family room is named the Boudoir and would have been the sitting room of Mrs Erskine. In this highly decorative room the lady of the house would have entertained her female relatives and friends.

In the middle of the first floor would have been a smaller bedroom but during restoration work the original design of a porch room with stairs on each side was revealed. These steps give access to the old library. This too was latterly used as bedrooms and opened out to the original sitting of the library.

Going down the steps gives access to several more bedrooms which contain four poster beds with valances and bed heads woven by Lady Augusta and showing the family motto and coat of arms. The first of these rooms is called the Red Bedroom and in the Red Dressing Room is an example of a 19th century shower bath which pumps water around the shower and was designed to be portable.

The Tapestry Room contains large17th century Flemish wall tapestries on of which shows Bacchus and Ariadne having a feast on the Island of Naxos.

The final room on this floor was the bedroom of the last Laird, Miss Millicent Erskine, whose married name was Lovett (she wed Lieutenant Colonel Thomas Maitland Lovett). It is known as Miss Millicent's Room.

The walls of the next staircase down are adorned with riding and prize whips that belonged to Augustus John William Henry Kennedy Erskine. This then leads to the Private Parlour of the Laird which later became the Smoking Room. It contains an example of a silent companion by the fireplace which is a board figure of a young child in period costume.

Next is the Charter Room which was the strong room for the Laird where he would have kept his business documents. There are still deed boxes, papers and letter scales on display and a writing desk. On the wall is a double handed broadsword.


The next flight of stairs down are interesting and in the words of the NTS guide show where the real work of the house took place. These stone steps are worn in the middle and must have seen many feet run up and down on an average working day. The first room would originally have been a servants hall and has been restored as such. At times it was used as a wine cellar and coal cellar. The rough dining table and bench chairs are laid with pewter plates and tankards.

Other rooms contain the China Pantry and the Wine Cellar. There is also a room with a model theatre on display. The far rooms are the Gun and Rod Rooms with displays of fishing and hunting equipment. This includes a large punt gun which would have been used to bag a flock of birds on the river and a seven barrelled rifle that was thought to be used during tiger shooting.

A life like dummy can be seen in the Housekeeper's Room which was originally the nursery. The original kitchen was on this lower floor and contains a large fireplace, open range, bread oven and hot plate.

This now ends the interior tour of the House of Dun and the tour continues into the outbuildings in the Courtyard and Stable Block. The first building is the potting shed and contains mannequins of the head gardener and his staff along with antique gardening equipment. Next is a weaver shop where you can buy weaving products such as linen which are made in the building next door by Angus Handloom Weavers in the loom room. Across the courtyard is a National Trust For Scotland gift shop then a reproduction of a Gamekeeper's Bothy with a model of a gamekeeper preparing his traps by an open fire. The next three buildings are a female, male and disabled toilet and then the tearoom and another gift shop. The House of Dun tearoom is famed for its homemade soups and cakes and the building was originally the carriage room.

Buried in the grounds of the House of Dun Gardens is a horse whose grave is thought to be Timekeeper who was a grey charger horse of William Henry Kennedy-Erskine the 18th Laird who was in the Charge of the Light Brigade during the Battle of Balaclava on 25 October 1854 in the Crimean War.

The House of Dun is set in stunning grounds and overlooks the Montrose Basin area with views across to the River South Esk.

Along with lawns are some well maintained herbaceous and rose borders. Apple and pears trees line one wall of the walled gardens. As can be seen in the photograph below there is an antique sundial. 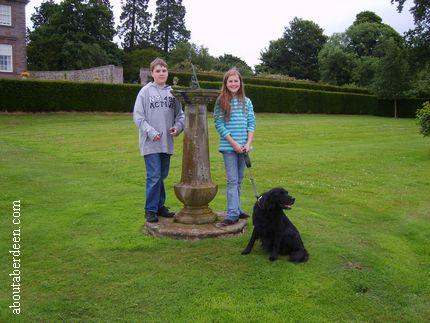 Parts of the Estate are farmed such as the Mains of Dun Farm and visitors are asked not to enter these areas.

There is a large car park next to the children's play area and the House of Dun is a short and pleasant walk. There are many steps into and around the House of Dun and sadly the interior of this NTS property is not totally suitable for disabled visitors or children in pushchairs. Wheelchair users can access the basement and ground floor rooms.


Opening Times For The House of Dun