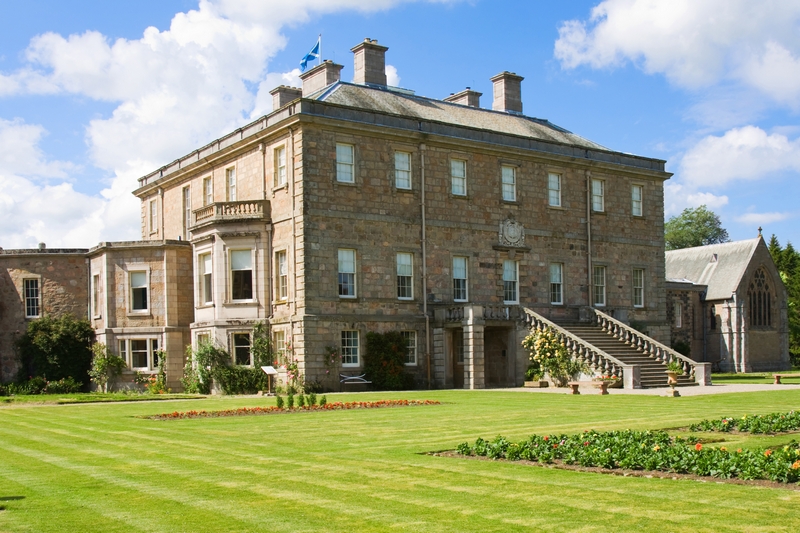 The stately home of Haddo House Ellon was designed by William Adam in 1732 for the 2nd Earl of Aberdeen (William Gordon). It is now owned by the National Trust for Scotland.

A later refurbishment was undertaken in 1880 which saw Victorian interiors blending with the Georgian architecture. Many of the original paintings, objects d'art and furniture are still displayed.


There are 85 watercolour paintings of local Aberdeenshire castles. These were commissioned by the fourth Earl and painted by local artist James Giles. He painted them between 1838 and 1855.

The Gordon family continued to live in here until 1978 when it was given over to The National Trust For Scotland. It was opened to the public a year later, as was the surrounding Haddo House Country Park, which belongs to Aberdeenshire Council.

Ecumenical Sunday evening services are still held in the Chapel during the summer.


It was built on the former site of the Castle.


Touring is by timed appointment with a guide. Tickets should be purchased on the day in the shop in the converted stable yard. Though this was changed in 2009 to booking by telephone appointment. This helps the NTS to reduce staffing costs and keep it open to the public.

Whilst waiting for your tour there is plenty to see around the grounds and gardens, or you can browse the well stocked gift shop or enjoy some home bakes, light snacks and delicious homemade soup and bread rolls in the Stables Restaurant. Do try their hot chocolate which is particularly delicious.

The gift shop and the restaurant sells some delicious Scottish produce to take away and enjoy such as cheeses, wine, cakes, biscuits and honey.

Whilst on the tour do look out for the 150 paintings collection of Scottish castles by James Giles, the unique long curving corridor and a fine example of an Italian double staircase.

The tranquil Haddo House Country Park surrounds the building. Leading towards the gardens is an avenue of impressive lime trees set amongst the lakes. There is plenty of birdlife to watch around the lakes. 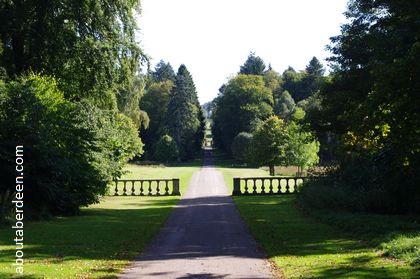 It has a beautiful terrace garden with some stunning rose beds set amongst a fountain and borders.

The large rear gardens have an assortment of plants and flowers.

Behind the large car park is an open grassed area suitable for picnics and playing ball games. To the right is a dog walking area with a dog assault course.

All the garden and parkland areas are free to enter.

The Wooden Hall plays host to some professional performances of operas and musicals such as Puccini's Turandot, Bizet's Carmen, Gilbert and Sullivan's The Mikado, Mozart's Requiem, Carol Concerts and Christmas Pantomimes.


It was built in the 1890s by the 2nd Lord and Lady. It was to be used as an indoor tennis court, library and concert hall. In 1946 the 4th Marquess (David) and his wife (June) founded the Choral and Operatic Society Of Haddo House and used the Hall for concerts.

The first society president was Ralph Vaughan Williams and then second was Sir Benjamin Britten.

Lady Aberdeen studied piano and conducting at the Royal College of Music and had many connections and was able to persuade many famous people to perform. These included the newsreader Richard Baker and Prince Edward performing in The Taming of the Shrew, Dame Janet Baker, William White, Sir Charles Groves and included a visit by the Queen Mother in 1953.

Visit the Haddo Hall Choral and Operatic Website at www.haddochoral.org.uk


The Ghosts Of Haddo House

The youngest son of the 1st Marquis of Aberdeen, Lord Archibald Gordon, was killed in a car accident. His ghost was seen in the Premier Bedroom.


How To Get To Haddo House

After her death two more bedrooms were opened to the viewing public. These are the Terrace Bedroom and the Lady Anne Bedroom on the second floor off the square. The larger Terrace Bedroom was initially to have been a library and instead had a dressing room added. The Lady Anne bedroom contains the collection of botanical watercolour paintings.