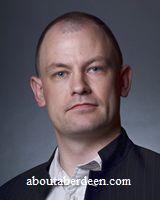 It looked like Gus Tawse was destined for a life in showbiz as early as 1989, when he won Kirkhill Primary School's primary seven talent contest, doing impressions of such star names as Saint & Greavsie, Alan Whicker and the granddad from Bread.
Unfortunately, he was soon to find that the road to stardom was not an easy one to take - a combination of his voice breaking and a 10 o'clock bedtime making it difficult to get gigs! 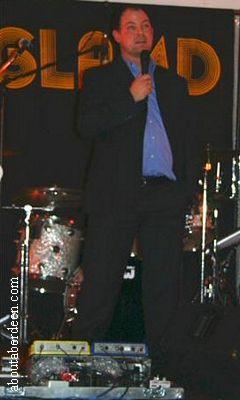 Fast forward 18 years and the first footsteps are being taken on that road again. The impressions have been replaced by sharp incisive one-liners as Gus attempts to make it as a stand-up comedian. Unfortunately, he could not repeat his competition success in 2007, but finished a credible 3rd in the Scottish Comedian Of The Year contest.

Described as the 'deadpan master of mirth' on account of his often straight-faced delivery, the Aberdeen-based comic excels in well written, carefully crafted gags that have you hanging on the edge of your seat for his entire set. And a love for writing topical news jokes coupled with a wealth of material mean that no two sets at gigs are ever the same.

Gus Tawse has lent his comic talents to BBC shows such as the sports parody and New Year favourite Only An Excuse, Watson's Wind-up on Radio Scotland and Sky Sports Soccer AM.

Gus Tawse started performing at the Lemon Tree in Aberdeen in 2010. His first performance was as the support act in February 10 for comic Milton Jones who appears on BBC2 Mock The Week and Radio 4 The News Quiz. Gus Tawse will have his own show at the Lemon Tree on 23 April 2010.


Where To See Comedian Gus Tawse In Aberdeen

Gus Tawse has now retired from comedy. His last gig was on Saturday 4 June 2011 at the Blue Lamp, Gallowgate. The following information is for historic interest:


Gus Tawse has recently turned his hand to compering a new monthly comedy night in Aberdeen, and has shown a contempt for hecklers which he normally reserves for amateur football referees!


Gus is also a match day football reporter and has covered matches for the Evening Express, Sunday Mail and Scottish Television.


Laconic Aberdonian whose material is drier than a mackerel enjoying its third day on a Dubai washing line. Scotsman

An interesting act, certainly one to look out for in the future.One4Review

An exquisite comedy writer with a wicked sense of humour and superbly witty one-liners.The Heckler, January 2006.

Definitely one to keep an eye on in 2006Stockethill Neighbourhood Watch Newsletter, December 2005.


Watch clips of Gus Tawse at Youtube at https://www.youtube.com/watch?v=orym9S783n0 or even better see Gus Tawse perform live at:

Sunday 6 January 2008 - Northern Laughs Open Mic night at Cafe Drummonds in Aberdeen. Doors open at 8pm and entry to this Aberdeen event is £2. Headliner is Gus Tawse and the MC is Andrew Learmonth.

1 October - Northern Laughs Live Stand Up Comedy at café Drummond. Doors open at 8pm and entry is £5 (students £4). Comedians include:

Northern Laughs - Benefit to raise money for British Heart Foundation.
Starring:
Friday 28th July at Tiger Tiger, Aberdeen. Entry is £5 which includes free entry to the nightclub.
Doors open at 8pm and the show starts at 8.30pm.
Guests are asked to wear something red.