Foos yer doos? Is a common question asked by those who speak the doric dialect in Aberdeenshire.

The correct answer to the question is to reply Aye peckin awa! saying it twice. 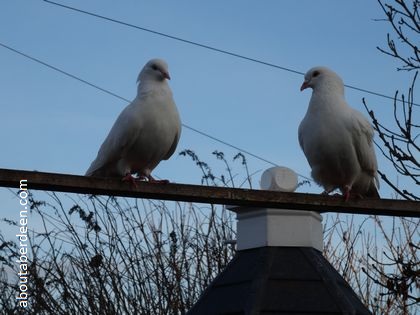 This meaning translates as How are you? And - I'm fine still pecking away.

So a broad Aberdonian would ask "Fit like mannie, foos yer doos?"

The phrase foos yer doos comes from the love of racing pigeons and doves that was commonplace in Aberdeen. Many of us still keep them and below are my own white doves enjoying a feed in my garden in the Scottish sunshine: