Biography of Comedy Group Flying Pigs Aberdeen their shows and where they appear such as the BBC Radio Scotland and BBC2 show Desperate Fishwives: 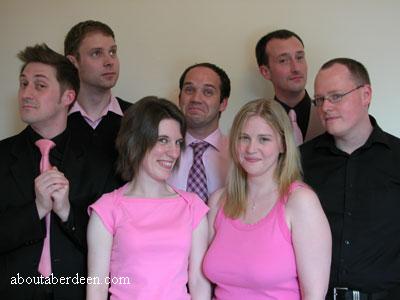 The comedy group Flying Pigs formed in 1998 at Aberdeen University during the Student Show. Their act was so successful that they formed Flying Pigs Productions and regularly appear in Aberdeen venues such as The Lemon Tree, HMT Aberdeen, The Arts centre and HMT Hilton.

The Flying Pigs return to BBC Radio Scotland in 2010 with a Hogmanay show and a Christmas show.

Desperate Fishwives BBC2 was broadcast on Tuesday 14 December 2010 at 10pm. About Aberdeen think that this Desperate Fishwives pilot was enjoyed on BBC Scotland only, though was available on the BBC iPlayer. Characters on the Desperate Fishwives BBC2 pilot television show include Archie and Davie, Robbie Shepherd and the Personal Trainer. Sketches included the farmer Jim and Jock at the Brig O Doon village of Meiklewartle who broadcast a Doric TV station called Meiklewartle Television (MTV) with the help of camera woman Moira. Other sketches on the pilot episode of Desperate Fishwives were the golfers at the golf course overlooking Aberdeen harbour, DFTV roving reporter Robbie Shepherd interviewing at Old Aberdeen, Mither and Faither talking about their friends Selma and Eddie and Derek the personal trainer who uses electrodes to stop a client eating bacon softies.

Desperate Fishwives comedy show on BBC 2 was topical with mentions of Donald Trump.

The Flying Pigs are recording their third series of their BBC Radio Scotland comedy program at Aberdeen Arts Centre on Saturday 21 November and Sunday 22 Nov from 7:30pm. Proceeds from tickets to the Flying Pigs will be donated to Castlegate Arts.

Aboutaberdeen think that the Flying Pigs are also producing a special Christmas episode.

Do look out for the Flying Pigs on BBC television when a pilot TV programme is to be broadcast. It is hoped that it will become a full series. It will feature their many characters including a special MTV channel called meikle wartle television, named after the wee village outside Inverurie.


The Flying Pigs will appear live at His Majesty's Theatre, Aberdeen in June 2009 for two weeks. The ten night 09 performances from the 18 to 27 June are called How To Look Good Glaikit. The flying Pigs will also be taking their unique comedy to neighbouring Angus county at Montrose Town Hall on 23 May 2009.


If you have a photo of the Flying Pigs of Aberdeen that I may use on this page then please contact me.


The Flying Pigs are to have their own shows on BBC Radio Scotland called Desperate Fishwives. On Friday the 22 and Saturday 23 June 2007 at 7:30pm the Desperate Fishwives recorded a live show at Aberdeen Arts Centre. The audience provided the live laughing sound effects for the two pilot episodes and the BBC Radio Scotland also recorded a further two episodes. If the pilots are successful we can look forward to hearing more of the Flying Pigs. There was a small admission charge to raise funds for the Castlegate Arts charity

This Desperate Fishwives series was also broadcast on BBC Radio 7.


Many of their humorous sketches and songs are performed in Doric and about Aberdeen events and people.


The Flying Pigs BBC Radio Scotland performances took place on Saturday 1 September 2007. Each 30 minute radio comedy sketch show was broadcast on the following three Saturday's at five minutes past noon. It was called Desperate Fishwives and featured sketches such as Mither and Faither, Archie and Davie the bowling fanatics and contestants of Who Wants to be a Millionaire with Chris Tarrant, the Couthy Doric Vampire, to former Doric Fishermen fae Peterhead working as airline pilots giving the safety take off talk, Yez Is Fit Ya Eat with Doctor Gillian McKeith and a mimicry of Radio Scotland's broadcaster and Aberdonian Robbie Shepherd reporting from Afghanistan. A particularly funny sketch involved Robbie Shepherd going to report on Hollywood.

Many Radio Scotland comedies are repeated on BBC Radio 7 so it is hoped that the four radio comedy sketch shows from The Flying Pigs in Aberdeen was be broadcast on this UK and worldwide radio station.

If you missed the Desperate Fishwives radio broadcasts you can use the listen again feature at BBC Radio Scotland at their website https://www.bbc.co.uk/scotland/radioscotland/

A second series of Desperate Fishwives by The Flying Pigs will be broadcast in the autumn or winter of 2008 on BBC Radio Scotland. The six part comedy series will be recorded live at the Arts Centre in Aberdeen in July 08.


The second radio series of The Flying Pigs - Desperate Fishwives was recorded for BBC Radio Scotland on Tuesday 1 July through to Thursday 3 July at 7:30pm at the Aberdeen Arts centre. The Flying Pigs second radio show once more stared popular characters such as Robbie Shepherd and there will be new characters who do not speak such broad Doric. The second Desperate Fishwives series will once more be for 6 weeks and about 39 minutes long.


2008 Performances of The Flying Pigs

The Flying Pigs 2008 performance at HMT Aberdeen will see the comic perform a twenty minute set during the second half of the evening which also sees performances by Caledon, the Scottish tenors and the Aberdeen and Banchory Strathspey and Reel Societies. The compere for the evening will be Jamie MacDougall from BBC Radio Scotland. The comedians will end their performance with their pavement dance routine along with the fiddlers.

2007 Performances of The Flying Pigs


In 2007 The Flying Pigs performed at HMT Aberdeen from Wednesday 7 March to Saturday 10 March 2007.


The 2007 The Flying Pigs show was called Desperate Fishwives a play on words of the popular Desperate Housewives Channel 4 TV programme. New characters to The Flying Pigs show included Mr Value who loves a bargain and The Janitor who is a health and safety freak. Returning popular characters include The Liar, Mither and Faither (they are on holiday to Paris this year) and Archie and Davie.


Past Performances of The Flying Pigs


7 - 10 March Desperate Fishwives - a collection of sketches and songs by Aberdeen’s own Flying Pig‘s.

The names of some of their shows are named after pig parts - past shows have been titled "Best Back"; "Flying Pig: The Seagull Has Landed" (at His Majesty's Theatre); or reflect Aberdonian humour and places: "Last Tango In Powis" (their last gig at HMT Hilton), The Madness of Kingswells and The Hunchback of Walker Dam.


Regular characters include The Liar; Mither and Faither; The Janitor; Archie and Davie; Selma and Eddie.


Read about Scotland the What?