Review and information about the Scot's Doric book Thi Lyfe An Tyme's O An Enshoar Loon written by Boddam fisherman Gordon Morrison with details of where to buy it online at the best internet price: 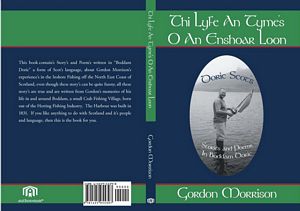 In 2006 Boddam author Gordon Morrison published his book Thi Lyfe An Tyme's O An Enshoar Loon which was written about his experiences of inshore fishing around the North East Coast of Scotland in locations like Peterhead, Boddam and Cruden Bay.


Imagine the dialect of the men in the BBC documentary Trawlermen and you will have some idea of the language of this delightful book by Boddamer Gordon Morrison. The stories and poems are written in this dialect still spoken around the Grampian area.

As an example of this Boddam Doric Scot's dialect the opening chapter of Thi Lyfe An Tyme's O An Enshoar Loon begins:


Thi Lyfe An Tyme's O An Enshoar Loon is written in Doric Scot's language and hugely entertaining with some really funny tales of fishing life in a small Scottish village. Boddam, where the author Gordon Morrison was born and still lives, is a small crab fishing village which was born out of the herring fishing industry at the Bloo Toon of Peterhead. Boddamer Gordon was born in August 1963 at Peterhead Cottage Hospital.

In between the stories from Boddam are songs and poems such as the Boddim Sea Shaantee (Boddam Sea Shantee), Thi Boddimer's Hung Eih Munkeeo (The Boddamers Hung A Monkey) and A Boddimer Fur Me - which is sung to the Andy Stewart tune of A Gordon For Me. There is even a Doric recipe to dress a crab, which has an hilarious picture of a crab in a kilt! Other features in Thi Lyfe An Tyme's O An Enshoar Loon are a Feish Quiz (fish quiz) a list of fish names in English and translated to Boddim Doric. For example Boddamers will call a seal a Seylkee and a herring a hirren. There then follows pages of A-Z and numbers translated from Boddim Dorric to English.

Thi Lyfe An Tyme's O An Enshoar Loon: Scot's Doric was written by Gordon Morrison to help preserve the local dialect which is known locally as the Mither Tongue. The title of the book translates to The Life and Times of an Inshore Boy. It was first published in September 2006 in paperback by publishers AuthorHouse and runs to 176 pages with photographs and pictures. The ISBN number is 1425955398.

Guide to the Doric dialect.