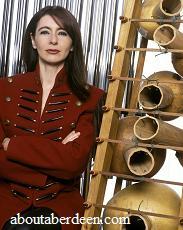 Evelyn Elizabeth Ann Glennie was born in Methlick near Ellon, Aberdeenshire on the 19th July 1965. Evelyn Glennie grew up at the family farm. She was educated at Ellon Academy. Her percussion teacher was Ron Forbes.

Dame Evelyn Glennie talks about her childhood and favourite meals such as saps and stovies in Taste Ye Back: Great Scots and the Food That Made Them

She also appeared on the radio 4 programme I've Never Seen Star Wars with Marcus Brigstocke where she watched Olympic games, went go karting and watched Downton Abbey, all for the first time.

In November 2010 Evelyn Glennie biography was extended with a climb of Kilimanjaro, the mountain in Africa, to raise money for AbleCareAfrica. To donate or find out more please visit
www.justgiving.com/Evelyn-Glennie


Since then Evelyn Glennie has been active in the musical world - she performs over 100 concerts and recitals each year. She performs and works with a wide range of musicians, orchestras and composers as well as giving solo percussion performances. Her collaborative performances have been with such leading people as Nana Vasoncelos, Kodo, Bela Fleck, Bjork, Bobby McFerrin, Sting, Kings Singers and Fred Frith.

Dame Evelyn Glennie will perform at the RSNO Scottish Prom on Saturday 26 June 2010.

In 1989 she was awarded a Grammy Award for Best Chamber Music Performance with David Corkhill, Murray Perahia and Georg Solti for Bartok: Sonata for Two Pianos and Percussion. Evelyn won a further Grammy award in 2002 for a collaboration with Bela Fleck for Sony Classical.


On the 26th November 1989 she made her first television appearance on The South Bank Show.


On the 6th March 1990 she was awarded the famous red book when she appeared in This Is Your Life.


In 2004 she presented the documentary Touch the Sound which explored the bodies connections amongst sound, rhythm and time. Throughout 2004 and 2005 she toured the UK demonstrating the findings of the documentary. This included shows at Woodend Barn in Banchory and the Belmont Cinema in Aberdeen.


Her autobiography Good Vibrations was published in 1990 Click here

to purchase it with free delivery available.


With Rocky Maffitt she published another book in 1995 entitled Rhythm and Beauty: The Art of Percussion - Click here


In 1990 she was named Scottish Woman of the Decade.


In 1993 Evelyn Glennie was awarded the Officer of the British Empire (OBE) for her service to music.


On the 24th November 2005 Evelyn was at the Music Hall in Aberdeen with the BBC Scottish Symphony Orchestra conducted by Jurjen Hempel.


Evelyn Glennie has been awarded 15 honorary doctorates from UK Universities.


In December 2006 Evelyn Glennie OBE was made a Dame in the New Year Honours for 2007. She was presented her award at Buckingham Palace on the 25 June 2008.

In April 2007 Evelyn Glennie was awarded the Incorporated Society of Musicians' Distinguished Musician Prize. She was nominated by councillor Dr David Smith who is a member of the Society.


Evelyn Glennie has recorded many CDs including Shadow Behind the Iron Sun, Rhythm Song, Rebounds and Light In Darkness.


On the 10 April 2008 Evelyn Glennie with perform with the Royal Scottish National Orchestra erforming a new work by John Corigliano at The Music Hall Aberdeen City.