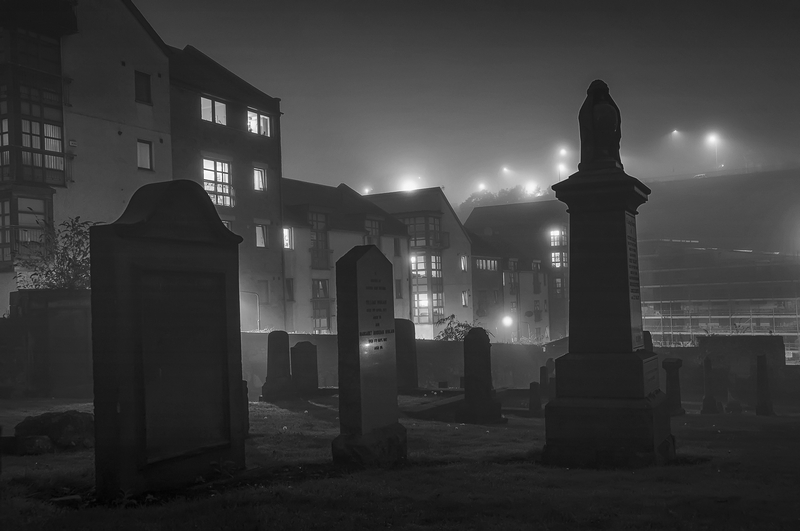 The ancient city of Edinburgh is steeped in history, murder, body snatching and foul play and so is home to many an Edinburgh ghost or to be more accurate many Edinburgh ghosts. This article will describe each Edinburgh ghost and give details of the Edinburgh ghosts tour and Edinburgh ghost walk where ghost experts will take you to the place of hauntings and areas of historic interest such as places where the body snatchers Burke and Hare would hunt out victims to kill and sell their bodies to medical students for research experiments and anatomical analysis.

An exorcism was said to have been performed in 2000 by Colin Grant who was a psychic and spiritualist medium from Edinburgh. He was said to have found evil forces and the presence of about 200 unhappy spirits who he thought were Covenanters that had starved to death. Colin Grant thereafter refused to enter Edinburgh Greyfriars Kirkyard without a cross and a bible. He unexpectedly died of a heart attack several weeks later.

Other spooky occurrences include a house fire at the organiser of an Edinburgh ghost tour. His papers relating to George Mackenzie and the Mackenzie Poltergeist were destroyed.

In life George Mackenzie was a Lord Advocate of the Covenanters Prison in the 17th century. He worked for King Charles II and was in charge of the jail that housed the persecuted Scottish Presbyterians. He persecuted the Covenanters so vigorously and sentenced many to death that he was nicknamed the Bluidy Mackenzie. This translates from Scots to English as Bloody Mackenzie. In later years he founded the National Library of Advocates in 1687 and this later became the National Library of Scotland.

His tomb in Edinburgh's Greyfriars Kirkyard was desecrated in 1999 when a homeless man broke into the Black Mausoleum and opened his coffin looking to make a bed and then his spirit haunted the area. It is said the homeless man was driven mad. In 2004 some teenagers broke into the Black Mausoleum and took out a skull from the corpse and performed some unnatural acts and played around with the head. They were stopped by a passing group of ghost hunters on an organised ghost tour of Edinburgh. The youths were charged with offences relating to violating graves.

Interestingly though George Mackenzie did not return to the Covenanters Prison but rather than the Edinburgh's Greyfriars Kirkyard where his body was resting in The Black Mausoleum.


In recent centuries Edinburgh city has been built upon the foundations of the 16th and 17th century buildings. During recent excavations a remarkably well preserved close was unveiled. This was Mary King's Close. Many people died from The Plague because of the filth and poverty. These narrow streets, alleyways and abandoned buildings can be explored during an organised Edinburgh ghost tour and are said to be haunted by several ghosts.

The first Edinburghghost in Mary King's Close is wee Annie who has been seen by a clairvoyant. Wee Annie is a child who sits huddled in a corner of a dwelling crying for a doll that she has lost. Since her ghost sighting people who visit the area during an Edinburgh ghost walk leave her toys and dolls. The spot looks more like a shrine now, full of teddy bears and dollies.

Other underground ghost tours of Edinburgh are organised by Auld Reekie Tours and their web site www.auldreekietours.co.uk


Walking around the city on an Edinburgh ghost tour it is easy to understand why Robert Louis Stevenson drew inspiration for his book Dr Jekyll and Mr Hyde and perhaps even Mary Shelley, the writer of Frankenstein who went on honeymoon in Edinburgh city.

Mercat Tours organised Edinburgh ghost tours through the Blair Street vaults. Several visitors have claimed that they were pinned to the damp walls by unseen demonic forces during their Edinburgh ghost walks. Unbelievers of ghosts can still enjoy these candlelit underground vaults during the organised ghost walks for their spectacular sights and atmosphere. Tickets can be bought online at their mercattours website.

If you plan an Edinburgh ghost tour then a date of interest is the month of May when the Edinburgh Ghost Fest is celebrated. This includes an overnight vigil with a leading ghost hunter. Previous ghost hunters have been from TV programmes like Most Haunted.

If you run an organised Edinburghghost walk or an Edinburgh ghost tour and would like listed on this page for free then please contact me.

The new film about Burke and Hare which stars the actor Simon Pegg used the services of an Edinburgh Burke and Hare murder tour and a guide to research locations in Edinburgh. The body snatchers tour showed the director John Landis other horror type films include An America Werewolf in London, The Twilight Zone, Slasher and Michael Jackson and Thriller. It is thought that former Dr Who star David Tennant may also star in Burke and Hare as William Hare to Simon Pegg's William Burke. Locations visited during this special Edinburgh ghost Burke and Hare murder tour included Greyfriars Kirkyard, Tanne's Close in West Port and Parliament Square where William Burke was hanged. For more information visit the West Port Tours website at westporttours.com