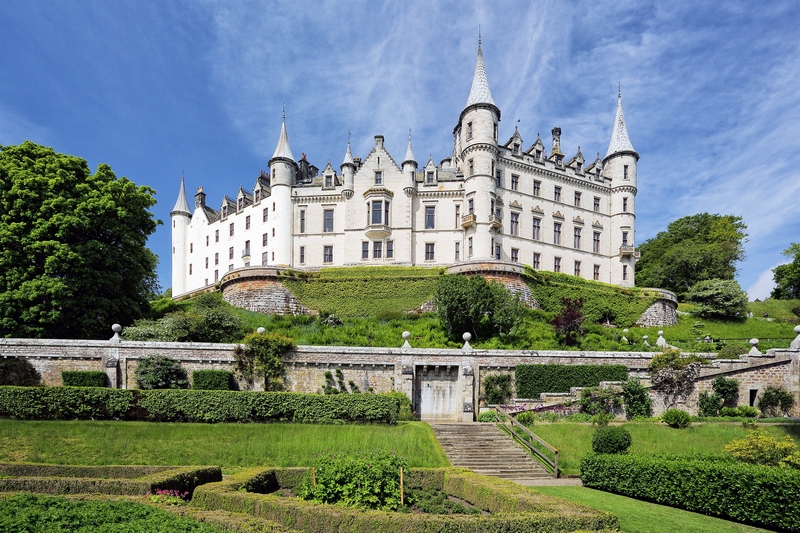 The Dunrobin Castle ghost is thought to be Margaret who was the daughter of the 14th Earl of Sutherland in the 17th Century. Margaret haunts the upper floors of Dunrobin Castle.

Margaret fell in love with someone who her father did not consider suitable. To prevent her marrying him he locked her in the attic of Dunrobin Castle whilst he arranged for a more suitable marriage.

Her maid helped to plan her escape and arranged for her lover to wait at the bottom of the Castle with a horse to make their escape to elope whilst she would smuggle a rope to Margaret. As Margaret was climbing out of the window her father came into the room and Margaret was so frightened that she screamed out and lost her hold on the rope, falling to her death.

Her ghost still haunts Dunrobin Castle, crying for her lover. A curse was placed on the Earl by her lover.


Dunrobin Castle can be found in the Scottish village of Golspie in Sutherland. The origins of the name Sutherland was Norse for South Lands. It was the seat of the Earls and Dukes of Sutherland.

Original parts of the Dunrobin Castle building date back to the year 1275 and there were further extensions and rebuilding work over the centuries, including major rebuilding in the 14th century by the 6th Earl before his marriage.

The French looking castle which can now be seen dates back to the 1800s and the same architect built the Houses of Parliament in London designed the Victorian extension (Sir Charles Barry).


In the Jacobite Rebellion of 1746 the family supported the Hanoverian Government Army which led to the Castle being captured by the army of Bonnie Prince Charlie. The Earl was able to make his escape and later recapture his Castle.

The Sutherland family were involved in the Highland clearances which saw many crofters being evicted from their homes and lands so that the areas could be used to rear sheep.

Dunrobin Castle in Scotland overlooks the North Sea and is one of the largest houses in the Highlands. There are 189 rooms, some of which contain many interesting items of historic interest from throughout the centuries. These items of memorabilia include paintings, uniforms, family items, furniture, pictures, objects d'art, and china. Visitors to Dunrobin Castle can tour the building and see these items in rooms such as the study, library, bedrooms, drawing room and nurseries. Visitors should listen out for the Dunrobin Castle ghost!

Objects of interest at Dunrobin Castle and its museum include a 19th century horse drawn fire engine which can be found in the Sub Hall.


The architect Sir Charles Barry laid out the formal gardens in 1850. In keeping with the French chateau design and fairy tale image of Dunrobin Castle the gardens were laid out with conical spires and much greenery.


The Dunrobin Castle address and telephone number contact details are: