Walford Bodie was born on the 11 June in Aberdeen in 1869. His birth name was Samuel Murphy Bodie.
His parents tried to encourage him to become a minister or to study medicine. However he went to work for the Scottish National Telephone Company where he learnt more about electricity as well as telephones.

The photograph below is of Dr Walford Bodie MD The Electrical Wizard on the left and on the right is Charlie Chaplin impersonating him. 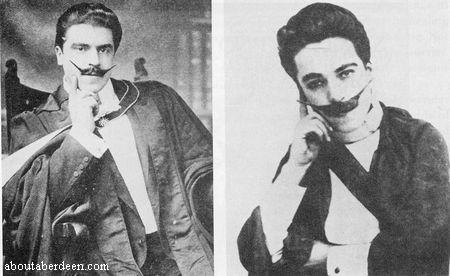 
He became a successful Music Hall performer and entertainer. Some would call him a master showman, others named him a conman. His acts utilised comedy, magic, hypnotism, sleight of hand, telepathy, clairvoyance, ventriloquism and the use of electricity, for which he earned the nickname The Electrical Wizard of the North. Other nicknames Walford Bodie earned include The British Edison. His first public performance was at Stonehaven Town Hall.


In 1897 he became the theatre manager at the Connaught Theatre of Variety in Norwich. He didn't take to this and missed performing to a live audience on the stage and returned to performing. He changed his name to Walford Bodie MD, taking the name Walford which was the name of his much respected brother-in-law.


He would pass electrical currents of tens of thousands of volts through his body, to light lamps and bulbs which he would hold in his hands. He also used electricity to heal medical complaints of members of his audience. His assistant was nicknamed La Belle Electra. He called the force of electric the Bodic Force. He would often invite the audience to inspect his apparatus and pass electric through the body of a volunteer.
Others tricks he would play on the audience would be to ask for a lady volunteer. As she came onto the stage he would move forward and touch her hand and make her hair stand on end with static electricity. He would also ask for a couple to kiss on stage and make their lips spark up with electricity.

Years later he extended these tricks in an act he called Bodie Electric Drug Company in which he would cure the lame and the sick with his bloodless surgery using hypnotism and electricity through the use of what he titled Electric Linament, Bodie's Health Spa and Electric Life Pills. What his audience did not know is that he used static electricity which would appear showy and produce lots of spark - but was totally harmless and that it is alleged that the sick and infirm were healthy people paid by him.


In 1886 he met Jeannie Henry at a show in Banff and they moved to Macduff when they married. They had built a family home in Skene Street which they called The Manor House when it was finished in 1906. He would call her Princess Rubie when she performed with him. Her older sisters Mary (Mystic Marie) and Isabella (La Belle Electra) also helped in his shows. Both sisters died aged in the 20s, Mary in 1906 and Isabella in 1919. Jeannie's younger sisters, Louie and Kitty also helped in the shows as musical conductresses.
Walford and Jeannie had three children, a daughter they also named Jeannie and a son Albert who followed in his father's footsteps and became an illusionist after a brief career as a Solicitor. Their other son was Samuel Bodie who did not take to the stage but became a real doctor and attained a medical degree and then worked as a medical practitioner at Edinburgh Hospital.

The couple were active in the community at Macduff and had built a public swimming pool and public baths. They also owned a house boat on the Thames and a theatrical club in London. On the 4 August 1926 he opened the Royal Tarlair Golf Club.

The Manor House in Macduff was sold by the family in 1936 and though it has had several owners since there has been few changes made. In 2006 it was purchased by Nicola Wood and Chris Earl. Upon moving into the Manor House they found the original drawings by the architect, stored in an old cupboard. 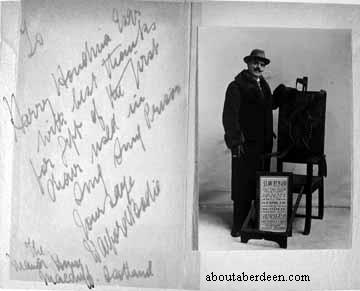 In 1890 he built a replica of the electric chair in which the first executed prisoner, William Kemmler of this method of execution was killed at Sing Sing prison in America. He would stage mock executions using the electric chair trick to shock and enthral his audiences in an act he called The Man They Could Not Electrocute. During performances he would talk to his audiences about how inhumane this method of execution was and publicly ask for the American authorities to execute prisoners by hanging, which he considered more effective, quicker and more humane.
Thirty years later in 1920 his great friend, Harry Houdini, purchased the actual original chair that William Kemnler had been executed on. Harry Houdini and Dr Walford Bodie had been friends for years and kept up a string of correspondence. The note in the picture above was signed yours aye which was the signature note of Walford Bodie.


Though he called himself Dr Walford Bodie MD he was no Doctor - in court he claimed the MD stood for Merry Devil and this got him off the hook. He had been taken to court by the medical profession who disliked his use of the MD and Dr title and that he claimed to easily cure illnesses and medical complaints. Medical students would visit his shows to heckle him and through rotten fish, eggs, vegetables and other food at him in an effort to halt his performances and healing demonstrations.

No stranger to courts he returned time and again to defend himself and his acts. He was sued by a former assistant for misrepresentation and lost. Due to the negative publicity such court actions earned, he soon lost favour in public venues such as Music Halls the Theatres and few managers would book his acts. However others enjoyed the publicity of the newspapers and would invite him to publicly perform in their venues. One such publicly defended case involved Walford Bodie demonstrating how he was resistance to electricity currents by showing the London Court his Death Cage Experiment.


Macduff magician Walford Bodie would always dress smartly, sometimes flamboyantly and was easily recognised by his and waxed handle-bar moustache and the monocle he would wear.

His shows were popular worldwide and on one voyage from India in 1916 during the First World War their ship was torpedoed and sunk in the Mediterranean. Jeannie and Waldford were not reunited for several weeks because the rescue ship he found himself on was also torpedoed.
During a tour of Ireland he was made Life Governor of the town of Cork.
He regularly performed with Scottish Music Hall Comedienne Harry Lauder.

He was so famous that Charlie Chaplin produced a comedy sketch which poked fun at his famous twirled moustache.

His daughter Jeannie died at only 18 years old in 1909. There still stands a granite memorial on Duff Street, near the family home, called Bodie's Fountain as a memorial to his daughter.
Albert, his son, also died young at only 26 years old in 1915. He had been a member of the Royal Society of Illusionists.

He also outlived his first wife who died in 1931.

He remarried whilst in his sixties to a 22 year old dancer called Florie Robertshaw.

On the 18 October in 1939 Macduff Magician Walford Bodie died at the end of the season at Blackpool Pleasure Beach where he had been performing at the Olympia. He was aged 70.

He wrote several books including a book called Valuable Prescriptions and a detective story where the hero, a hypnotist, solves crime and murders. It was compared to the popular Sherlock Holmes books.

Roger Woods and Brian Lead wrote a book about The Electrical Wizard of the North called Showmen or Charlatans?: The Stories of 'Dr' Walford Bodie and 'Sir' Alexander Cannon.


For years after his death Macduff mothers would warn their children that if they did not behave they would get a visit from the ghost of Walford Bodie! Some people in Macduff still pass on this legend to their children and grand children.

It is rumoured that the Manor House is haunted by the ghost of Walford Bodie though there have been no confirmed sightings. Some adults will still cross the road rather than walk past the house - so frightened were they in their childhoods! When the current owners, Nicola Wood and Chris Earl bought the house they even had a workman refuse to step into the house because of the alleged ghost!


It is hoped that the music room of the Manor House, Macduff will be turned into a museum about Walford Bodie, his life and his amazing electrical tricks.

In June 2007 the granddaughter of Walford Bodie, Jean Connon, now aged 69 years was on a visit back to Scotland from Canada. She used to visit Manor House during the 1940s where her grandfather, lived. Jean Connon is the daughter of Dr Samuel Bodie. The new owner of the Manor House, Chris Earl, allowed Mrs Jean Connon to visit the home once more during her trip to Macduff. She remembered the ornamental lions that were in the garden and fondly recalled playing on the stairs of Manor House. Her grandfather died when she was one years old but Manor House remained in the family for some years.

A famous quote attributed to Dr Walford Bodie is:

I've got a living to make, to put it plainly; there's more money in shocking and terrifying than in edifying!

Though some sources in America have cited this wrongly as being said by Walt Brodie.


The Macuff fountain was given to the town by Walford Bodie in 1910 in memory of his daughter, Jeannie, when she died in 1909 aged just 18 years. It is made from grey and red granite and has a bronze plaque and has stood near to the Macduff harbour on two spots. He intended his fountain to be used by thirsty harbour workers. The photograph below shows the engraved image of Jeannie: 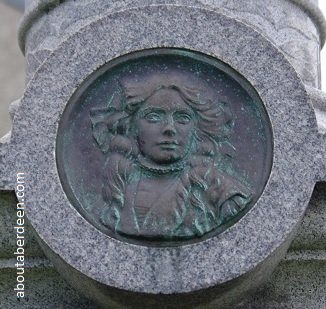 It was then moved to Duff Street in the 1960s. In 2008 there was a proposal by the Banff and Community Council to move the Macduff Fountain to the landscaped garden at Crook o' Ness Street. The Macduff fountain is a category C listed structure.

The Macduff fountain was originally sited at the harbour and was once more moved in 2009 back to the harbour. The contractors were Memorial Specialists Aberdeen Ltd who are monumental masons. A few years later Banff and Macduff Community Council elected to have the fountain sited in the Maritime Memorial Garden located at Crook O'Ness Street.

The engraving on the fountain reads:

1910 Presented to the Burgh of MacDuff by Doctor and Mrs Walford Bodie in memory of their daughter Jeannie.

Along the rim of the drinking fountain is written:


My thanks to Jim Cain of Australia, a distant relative of Dr Bodie, for additional material and photos used for this article.


Nearby attractions include Macduff Marine Aquarium