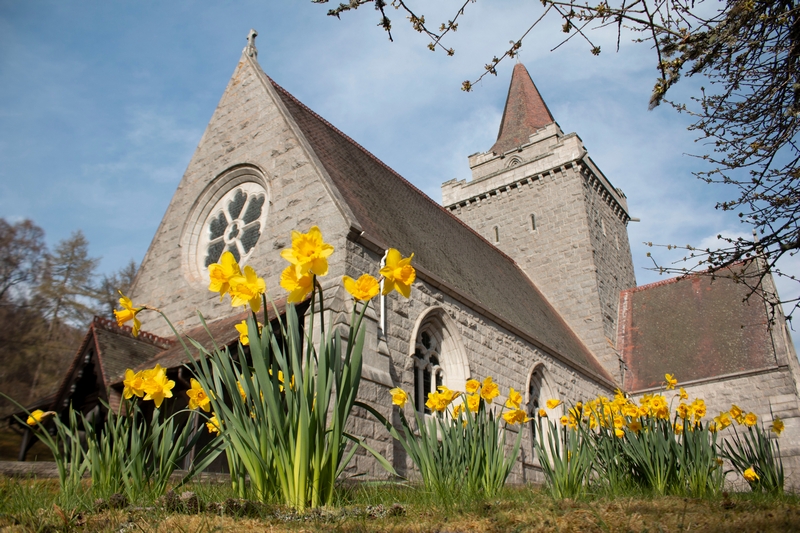 Set in the heart of Royal Deeside Crathie Church is a picturesque building steeped in history. Nearby Balmoral Castle is the Scottish Highland retreat of the Royal Family, who enjoy worshipping in the Church. The Church affords some great views around the Deeside countryside and the nearby River Dee. It is also known as Crathie Kirk.


Crathes Kirk is a Church of Scotland place of worship. The original Church dates back to the 6th Century with a further Church built in the 14th Century. The remains of this building can still be seen across the road. The graveyard is still there and the Ghillie of Queen Victoria, John Brown, is buried there. Many of her servants were buried there, and some headstones have personal epitaphs from Queen Victoria. The Church fell into ruin after a larger Church, to accommodate the growing community, was built in 1805 at the site of Crathes Church. This was the Church Queen Victoria first attended in 1848 and started the tradition of the Royal Family attending Crathes Church when in residence at Balmoral Castle.

The building work of the present Church was commenced in 1893 when Queen Victoria laid the foundation stone. Work finished in 1895. Funds for the building was raised by the parishioners and members of the public and Queen Victoria's daughters, Princess Louise and Princess Beatrice donated a gift of Â£2000 which was raised by holding a bazaar in the grounds of Balmoral Castle. Princess Beatrice also donated the four bells which are still used today before each service. 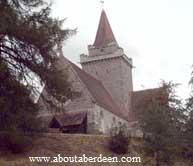 The Church was built in a crucifix shape out of the local granite. The architect was Aberdonian A. Marshall Mackenzie.

The interior is beautifully crafted and bears many Royal connections.

The baptismal font was gifted by Arthur the Duke of Connaught and Strathearn who was Queen Victoria's son. It is made from polished Kemnay and Rubislaw granite.

The Communion Table was gifted by King George V and Queen Mary. It is dedicated to Edward VII. It is crafted from white Iona marble with green and black markings.


At the outbreak of the Second World War the Minister of Crathie Kirk was Dr Lamb.


The colours of The First Battalion The Gordon Highlanders were laid to the Church by Prince Charles, their Colonel In Chief, in 1988 when the Regiment were amalgamated to form The Highlanders. They rest on the North Wall. In the North Transept are the crests of each Scottish Regiment to have served as Royal Guard to the Royal Family at Balmoral.

Several of the stained glass windows are memorials to members of the Royal Family including one from Queen Victoria dedicated to her beloved husband Prince Albert. There are marble medallions and busts of members of The Royal Family along the walls.

In 1979 Crathie Church linked with the Church in Braemar, together they serve an 180,000 acre parish.


There is a small shop selling souvenirs and a guide book and a guide is in attendance. Parking is across the road and there are toilets and a tourist information centre. No photographs can be taken inside the Church but photos can be taken of the exterior. Admission is free, though there is a donation box.

From Easter weekend until the 31st October the Church is open daily from 9:30 am until 5 pm. The Sunday service is at 11:30 am and is open to everyone. The Royal Family have their own entrance and exit at the south transept. This area is used exclusively for their worshipping.


A new Crathie Kirk Window was installed in 2011 and was created to honour the Reverend Keith Angus who had been the Queen's Chaplain from 1979 to 1996. The stained glass window at Crathie Kirk was made by Jennifer Jane Bayliss at her studio in Hatton of Fintray and was commissioned and donated by the Angus family in memory of Rev Keith Angus who died in 2002.