The bonnie pink fairytale looking Craigievar Castle at Alford, Aberdeenshire is an L Plan building, though built upwards instead of sideways. With its striking turrets, towers, cupolas, gargoyles and corbelling, it is a splendid example of Scottish Baronial architecture and remains largely unspoiled. Its pink colour adds to its charm, whilst the seven storey height gives it an air of magnificence. 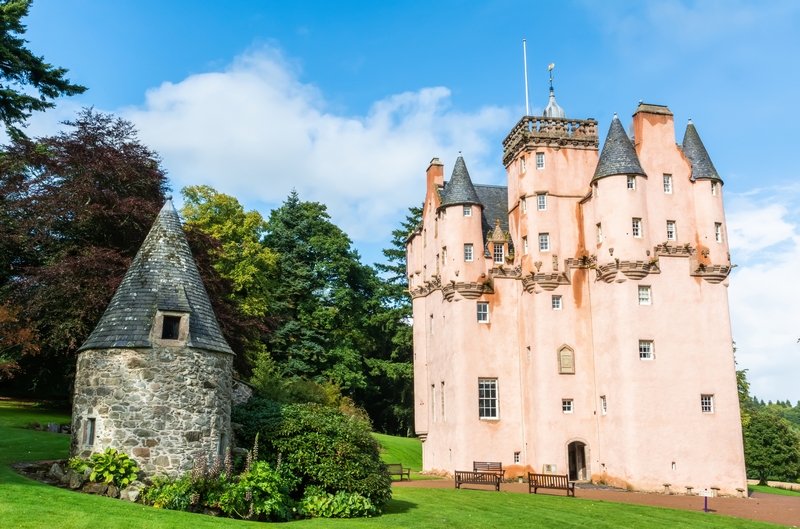 It is owned by the National Trust for Scotland.


It was named after a nearby hill and the original was built sometime in the 14th Century and owned by the Mortimer family. Though this building was never finished and the family was forced to sell it and land to William Forbes of Menie in 1610 due to financial troubles.

The building as it appears today commenced in 1610 and in 1626 The Great Tower was built by William Forbes (nicknamed Danzig Willie). From then it had been lived in by the Forbes and Forbes-Sempill family.

It was bought by a consortium in 1963 from the Forbes-Sempill family and donated to The National Trust for Scotland in 1963.


Touring is timed and organised by guides who take you from each room, describing points of interest about Craigievar Castle history. Some of the stairs are quite narrow and steep.

The Great Hall is the central attraction, with its secret staircase, musician's gallery and large fireplace with the Stuart Arms.

There still survives a collection of family portraits and furniture dating back to the 17th Century. Original painted ceilings remain remarkably preserved.

Visitors can travel the secret staircase of the Laird which was used as an escape route from The Hall to the top of the Tower.

At the main staircase you can see the coat of arms which dates back to 1668 and delivers the Forbes family motto: "Doe not vaiken sleiping dogs."

Take note of the only entrance and how narrow it and the staircase are - though many a Forbes family member enteredby the door - they all left by a window as it was too narrow a building to carry a coffin out! Though this only entrance did make it easier to defend and Craigievar Castle never fell in battle, even during the fiercest clan attacks.


There is a small car park. Unfortunately it is not open for tour buses due to the limited access.

Toilets are situated by the car park.

Beside the car park is a small picnic area with benches and seats. Behind this is a marked woodland walk.

To get there from Aberdeen take the A944 then join the A980.


It closed from October 2007 so that the exterior walls can be re-harled. Though a new cement based mix was added to the outside walls in the 1970s this has not allowed the moisture to escape naturally and caused a spot of damp. Workman and craftsmen will now use traditional methods of lime and sand and this harling work was undertaken by Laing Traditional Masonry who used hand held tools rather than mechanical tools to further reduce any internal damage by vibrations. It is thought that the total cost of the building work was more than half a million pounds which was funded partly from a grant aid from Historic Scotland and from a private donation.

The gardens have expanded in the form of a nature trail and new paths. These were opened by the pupils of Craigievar Primary School during their eco-health week. Other recent work on the exterior include National Trust for Scotland (NTS) volunteer teams restoring the walled gardens. This included adding a summerhouse that looks like a pavilion. This was built in memory of Callum Melville a local 21 year old who died in a Tasmanian hostel blaze on New Year Day 2004.

It was re-opened in June 2010 by Prince Charles and his wife Camilla (the Duke and Duchess of Rothesay). They cut a special ribbon of Forbes Tartan and had a tour of the recently renovations.

Landward on BBC2 Scotland visited in March 2010 to see how the restoration work was progressing. They chatted with the cleaning volunteers and tour staff about how they cleaned the inside and how it may have affected the ghosts of Craigievar Castle!


On Sunday 17 June 2007 at 9pm there was a TV programme called How We Built Britain on BBC 1. The television documentary was presented by David Dimbleby and this edition was filmed in Scotland. Part of this was from the tower house. David Dimbleby toured the building and showed the viewer the rooms which included the doorway to the secret staircase.

He also went to Kinross House, the tenements of Glasgow, Stirling Castle, Dunrobin Castle, Slains Castle, Crovie and Aberdeen City where he visited the many granite buildings including Marschall College.