Come Dine With Me Aberdeen 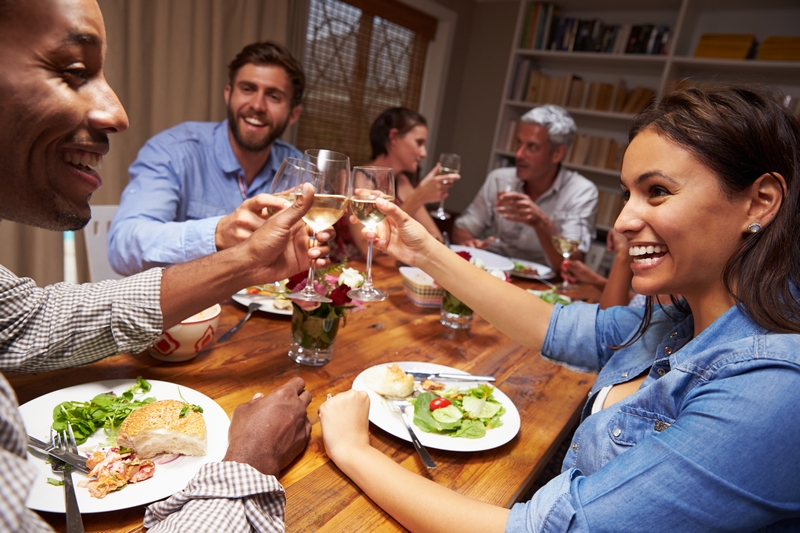 Come Dine With Me Aberdeen was broadcast on Channel 4 on Friday 21 November 2008 at 8pm. The Aberdeen Come Dine With Me was filmed as part of series 5 of the popular TV series where a group of strangers from the same city, town or village go to each others homes and take turns to cook and serve a three course meal. After each meal in Come Dine With Me the other dinners mark the meal and presentation out of ten. On the fifth episode the cook and host with the most points will win a cash prize. The cash prize for these amateur chefs is a whopping Â£1000.

Laura Rojales, a carer at Lethen Park Care Home, cooked mussels in a white wine and oyster sauce and prawn tempura as a her starter with Chicken Pastel with Yorkshire pudding for her mains. For dessert Laura made Leche flan. To give her prawn tempura some zest Laura added some sprite drink and white wine. Laura was joint winner with Bob and won Â£500 from the Â£1000 cash prize for getting 22 points out of a possible 30. She intends to send the money home to her children in the Philippines.

Robert Calder, who prefers to be called Bob, may be a well known face to Aberdonians. Bob is the Landlord of the Queen Vic pub in Rosemount. He cooked Scottish dishes including his own recipe for Cullen Skink tart. For mains Bob cooked stoved howtowdie wi' drappit eggs, skirlie and new potatoes. As a dessert he made grilled Scottish strawberries with Pimms, vanilla ice cream and homemade shortbread. Bob Calder wore his kilt for the evening and guests were piped in to the bagpipes. H laid some traps in his bedroom drawers for those guests who went snooping. These were jumping paper snakes that jumped out on Laura as she opened his drawer. Bob Calder was joint winner with Laura when they both scored 22 points out of a possible 30.

Rick Breckenridge is the manager of the Foundation Nightclub in Carnegie Brae, Aberdeen and he served cold summer tomato soup with pesto dressing as a starter. He continued the seafood theme for his main dish with a meal of Scottish steamed sea bass stuffed with garlic and coriander served on a bed of soy glazed noodles. He purchased his fish from Aberdeen Market and clips of this was shown on Come Dine With Me. Laura maintain the Pilipino tradition of eating the fish eyeballs. For pudding Rick Breckenridge made crushed raspberry cheesecake. Clips were shown of Rick's home in Old Aberdeen and his hat collection which his guests enjoyed trying on. Aberdeen Drag Queen Cherry Bakewell made a guest appearance from the gay nightclub dressed in a revealing French maid costume much to the embarrassment of landlord Bob! Read more about the Foundation Nightclub and Cherry Bakewell (alias Kevin Thorburn) at www.foundationnightclub.co.uk

Amanda Westlake is a farm owner and runs self catering accommodation in Aberdeenshire and served up a starter of Cullen Skink soup with a difference in that she added carnation milk which she said was a Shetland adaptation. For her main meal Amanda Westlake cooked Aberdeen Angus steaks of Chez Donnell fillet steak and red wine jus with maris piper mashed potatoes. Her delicious dessert of black cherry crumble with homemade Fyvie custard. She took her guests to the big barn where they listened to a fiddler, spoon player and guitarist. Amanda Westlake from Fyvie came fourth with a score of 18 out of 30.

At the end of Come Dine With Me Aberdeen Cherry Bakewell visited Bob Calder at his Rosemount home with a bouquet of flowers accompanied to the music 5000 miles by the Proclaimers.


There is also a celebrity version of Come Dine With Me with the cash prize going to the charity of choice of the celeb. Local star Aggie McKenzie appeared on the Celebrity Come Dine With Me. Read about her appearance on the AboutAberdeen review on the Aggie MacKenzie Biography page.

In 2006 there was a Come Dine With Me Christmas special edition from York.


Appear on Come Dine With Me

To apply to appear on Come Dine With Me as a contestant and amateur chef you need to be aged over 18 years old and be able to cater for at least four guests into your house, flat or bungalow. You will also have to be prepared to have a film crew in your home and be prepared to have the cameras and the nosey guests rummage round your home! The guests having a look round your home is filmed and fellow Aberdonians will then know all about you!


Come Dine With Me was first broadcast on Channel4 in March 2005.


The voice over commentary of Come Dine With Me is recorded by Dave Lamb. The actor Dave Lamb has appeared on television programmes such as Catwalk Dogs as Colin, Grownups as Mr Crow, Life and Times of Vivienne Vyle as the Director, The Smoking Room as Derek, City Lights as the Quizmaster, Broken News as Barry Shipley, My Dad's the Prime Minister as Steven, Doc Martin as the Courier, Eastenders as a Bailiff, Bromwell High, Dr Terrible's House of Horrible as a Policeman, Rhona as Geoff, Hippies as Art Ledger, People Like Us, The Outlaw, How Do You Want Me as Trevor and Dave Lamb has had various roles in the comedy sketch shows Armstrong and Miller, Goodness Gracious Me and the Armando Iannucci Show. Dave Lamb has also recorded various voices for the satirical comedy cartoon series 2DTV.


Come Dine With Me DVD

The previous series of ComeDineWithMe are often repeated on C4.