Each year, at the start of the Winter Festival, the Coca Cola truck visits Aberdeen, usually on the day of the Union Street Christmas lights switch on parade. 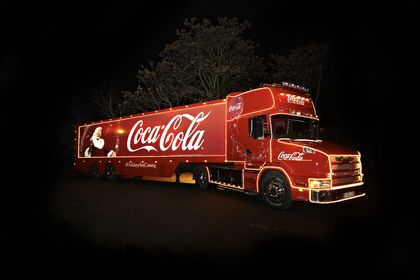 It makes quite a sight with its stunning lights and colourful decoration, driving into the City. The lorry is fitted out like their Holidays Are Coming television advert with a giant Santa on the side. It stops at the shopping centres of either Union Square or outside the St Nicholas Shopping Centre where you can take your photograph by it. The area is transformed into a winter wonderland with snow, Christmas tree and fencing. Their helpers provide entertainment like festive music or carol singing and give out free samples of Coca-Cola.

The 2019 Coca Cola truck Aberdeen visit is yet to be announced.