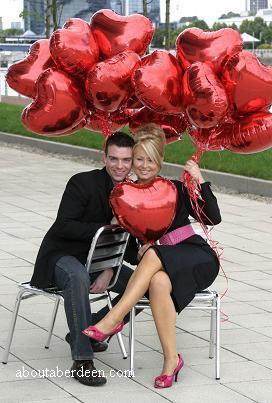 
Club Cupid is a brand new speed dating show for the web generation which will be presented by Scottish young rising stars Des Clarke and Michelle Watt.


Each week Scottish Television will be giving one man and one woman the chance to speed date five potential suitors in a bid to find true love, a soulmate, or new friends.

STV is now looking for fun, outgoing singles, of all ages from Aberdeen and throughout Scotland to take part in the Club Cupid show. Contestants must be aged over 18 years.


If you are looking for love, a soulmate, romance or friendship then look no further than STV’s new series, Club Cupid. If successful you will have a great night out, have fun and could find the man or woman of your dreams, in your local area.


To apply as a contestant come along to an open audition at the STV studios at Craigshaw Business Park, West Tullos, Aberdeen on Thursday 5 October between 2pm -7pm. Who knows you might even find love on the audition night!

For more information, call Keira Hutchison on 0141 3003225 or email your contact details to clubcupidATstv.tv - please replace AT with @ - please include a photograph, your name, address, age and phone number.

Please mention that you heard about the Club Cupid STV television dating programme from aboutaberdeen.com if you are going to apply.


Club Cupid presenters will be Michelle Watt and Des Clarke. Michelle Watt's other TV work includes presenting on Price Drop TV on Sky Digital channel 635. Michelle Watt has presented Junior Eurovision for ITV2 and This Morning Puzzle Book for ITV Play as well as co-presenting and interviewing a range of celebrity guests for BBC Radio Scotland. She is the daughter of former world boxing champion Jim Watt.

Presenter Michelle Watt said: “If you’re looking for that someone special, we want to hear from you. I would recommend all fun-loving singles in Aberdeen to get in touch – Club Cupid could be the chance you’ve been waiting for!”


Des Clarke continued: “Club Cupid will be a great show, and we have a few twists and surprises for the viewers along the way. I think we’ll have as much fun making it as viewers will watching it!”

Club Cupid will air on STV in October. It will be filmed in Dundee and will feature people of all ages, heterosexual, gay and lesbian people and a wide range of interesting characters from Scotland.