The 2022 Aberdeen Christmas Village will take place at Broad Street, the Quadrangle at Marischal College and into the Upperkirkgate area from 17 November until Hogmanay. It will once again be a magical area of street entertainment, ice skating, crazy golf, market stalls and hot and cold food and drinks designed for all ages. 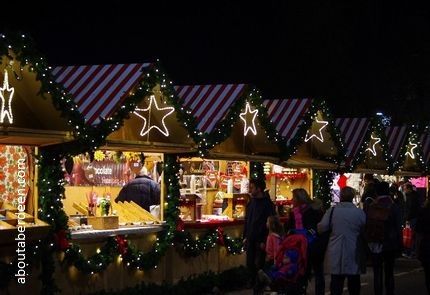 The 2022 Aberdeen Christmas Village promises to be double the size of last year's event with entertainment from Codonas that will suit all ages from the gentle Santa Express train rides for the children through to thrilling, daredevil head spinning rides for adults, such as the slingshot bungee-jump.

Food stalls in the market area include a hot chestnut stall, well stocked bars with a range of German beers and wines, tasty Bratwurst and Frankfurter sausages.

Toilets, including disabled toilets can be found in the area.

The Blizzard , Freak Out and Miami rides from Codonaâ€™s will be there as well as childrenâ€™s rides such as the Balloon Ride and the popular Helter Skelter. New for this year is the Candy Cane Bungy Trampolines.

Santa will be there in his Grotto at the Quadrangle at Marischal College.