Cameron Stout was born on Orkney Islands, Scotland on the 8 March 1971. He worked as a fish trader. The shy Orcadian leaped to fame in 2003 when he won Big Brother 4 on the 25th July. Since then he has been adopted by Aberdeen and the loveable Orcadian has settled into the Aberdonian way of life. The committed Christian attained the highest votes ever in the history of the Big brother TV programme. After winning Big Brother he bought his local church a new piano. He won an award for being Scottish Bible Reader of the Year - Cameron choose the Bible as his chosen book to take into the Big Brother House. His brother, Julyan Sinclair is a TV presenter.


Cameron Stout has shown a talent for writing articles and features for a variety of newspaper including the Aberdeenshire local paper The Evening Express. He had a weekly column each Saturday from 2004 and then on a Monday. His last column was on 26 March 2012. Read about the Evening Express.


Cameron has a love of cars and road tests cars for the Orcadian local paper, Orkney Today. His column is called In the driving seat with Cameron Stout.

In 2012 Cameron Stout took part in the STV Appeal Update along with athlete Liz McColgan and comic Andy Cameron where they cooked for other Scottish celebrities aboard the Royal Yacht Britannia. 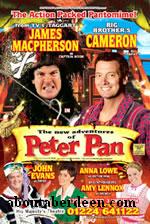 Each year Cameron delights audiences as the main star in Pantomines at HMT Theatre Aberdeen. The latest events are listed here.
The first pantomime Cameron Stout appeared in was Peter Pan at HMT Aberdeen in 2003. His part was Starkey. Also appearing in the debut panto of Cameron Stout was Anna Lowe from Banchory who played Peter Pan, James MacPherson (DCI Mike Jardine - Taggart) who played Captain Hook, John Evans.

In 2004 he played Prince Oliver from Orkney in Snow White at HMT Hilton (HMT Aberdeen was being refurbished and upgraded).

The 2005 panto was Jack and the Beanstalk Pantomine which stared Cameron Stout as King Crumble and Archie from Balamory, Miles Jupp as Simple Simon at HMT Aberdeen.

In 2006 Cameron Stout defected to Glasgow Pavilion to star in the Peter Pan pantomime - we forgive you Cameron - Haste ye back to Aberdeen! For this production Cameron had to dye his hair black from his lovely natural brown hair and distinguished grey highlights. His co stars in The Magical Adventures Of Peter Pan were Dean Park (comedian, actor, radio presenter and regular pantomime dame), Cat Harvey (Real Radio presenter) and Stephen Purdon (Shell Suit Bob from River City). The Glasgow Pavillion pantomime ran until 27 January 2007.

In 2007 Cameron Stout appeared in the panto Cinderella as Prince Charming at the Pavilion in Glasgow. Playing the Baroness is Torry lass Joyce Falconer.


Proving that there is life after Big Brother Cameron Stout appeared on TV again in the Identity Game Show on BBC2. Identity is hosted by Donny Osmond and contestants have to guess the occupation of guests. Cameron Stout was a celebrity guest along with Olympic javelin gold medal winner Tessa Sanderson.


Each year Cameron Stout forms part of the entertainment aboard the National Trust For Scotland Cruises were he entertains passengers long with other famous Scottish celebrities like George Donald of Scotland The What?


For several years Cameron Stout has represented the Evening Express newspaper as a valentine Romeo delivering red roses to special ladies in Aberdeen and around Aberdeenshire. Each year one lucky lady and her spouse or partner won a Valentine competition prize trip to Venice and some spending money. In 2007 this changed to a fun Mr & Mrs contest based on the TV programme which was hosted by Derek Batey and was even played live at HMT Aberdeen. So from Monday 5 February Aberdonian couples could take part in the Evening Express Mr & Mrs contest and answer questions about each other to win a holiday to Venice with £500 spending money and a digital camera to take photos to get published in the EE paper. Runner up winners of the Mr and Mrs EE contest could win Mr & Mrs board games from the makers Upstarts. Cameron Stout visited each couple in their home, workplace or any other place of surprise!

The 2007 Evening Express Mr and Mrs Valentine competition was won by Debbie Thornton and Jon Collins who had been engaged for 12 years. Jon proposed to Debbie after hearing that they had won and they will get married on their engagement anniversary of 12 August.


In 2007 BBC Radio Pusey was launched. this was the official radio station for Children In Need. Broadcasters included Cameron Stout, Gordon Ramsay, Sir Terry Wogan, Trinny and Susannah, Michelle McManus, Kate Nash, Leona Lewis, Biffy Clyro and Lorraine Kelly. Radio Pudsey is an internet only radio station broadcast that launched on the 5 November 2007. Radio Pudsey will be broadcast from Pacific Quay in Glasgow, so Cameron Stout will be living there for a few weeks during his stint as a DJ. Big Brother contestant Cameron Stout will be joined by other Disc Jockeys such as Des Clarke, Angellica Bell and Sarah Cawood.

Other features in Radio Pudsey include fund raising tips, celebrity interviews, music requests and features about charities and organisations that have benefited from Children In Need money.


On Friday 17 November 2006 CameronStout and his brother Julyan Sinclair took part in BBC Scotland Children in Need. They performed in Spex Factor where Scottish celebrities formed a couple and sang the songs of the Proclaimers. Other celeb teams were Ian Robertson with Kate Dickie and Craig Hill with Janey Godley. Cameron and Julyan sang 500 miles and King of the Road which saw them win the contest.

In 2005 CameronStout was a judge on BBC Scotland Children in Need for the Strictly Come Highland Dancing event.

In September 2007 CameronStout had his photo taken by Royal photographer Lord Snowdon. He was joined in the photograph by fellow Big Brother winners Pete Bennett (Big Brother 7) and Anthony Hutton (Big Brother 6). Their picture will appear in a book about the history of Channel 4 to celebrate its 25th anniversary.

On Monday 24 December 2007 Cameron Stour co presented the Watchnight Celebration Orkney service that was broadcast on BBC1 Scotland. The other presenter for the Christmas Eve service was Sally Magnusson. The live watchnight service came from the St Magnus Cathedral in Kirkwall Orkney Islands. Christmas carols during the Watchnight celebration in Orkney included Ding Dong Merrily on High, I Saw Three Ships Go Sailing and The Holly and the Ivy which were accompanied by the Kirkwall Grammar School choir. They were joined by the Hadhirgaan folk musicians. The Midnight Eucharist was celebrated by the Reverend Peter Atkinson the Dean of Worcester and the Right Rev David Walker the Bishop of Dudley.

Cameron Stout read the traditional Orkney poem the Trang Innkeepers Tale and talked to the primary school children on Orkney from his old school, the Stromness Primary School, about Christmas and the festival of St. Lucian. Cameron Stout then talked about the Orkney Italian Chapel made by Prisoners of War (POW) from Italy. He then introduced the Mayfield Singers who went on to perform Still The Night in the original German language.

On Sunday 13 January 2008 Cameron Stout appeared on Songs of Praise with Sally Magnusson. Songs of Praise was from Orkney and the Saint Magnus Cathedral which dates back to the 12th century. Cameron Stout talked to Sally Magnusson about his religious faith, being the winner of Big Brother 4 and how becoming a celebrity has affected his life and Christian faith. Cameron lent his fine voice to the congregation of St Magnus Cathedral in Orkney when they sang the hymns Eternal Father strong to Save, The head that once was crowned with thorns, Jesus Christ the apple tree, Mallaig Sprinkling song, Touch the Earth Lightly, I the Lord of Sea and Sky, Lord I am Standing Here So far From Home and Spirit of God.

Viewers of Songs of Praise with Cameron Stout were treated to a history and scenes of the ancient burial mound The Tomb of the Eagles and learnt how Westray Church uses sustainable energy.

On Saturday 26 April 2008 Cameron Stout and his brother Julyan Sinclair were celebrity guests at the annual Shore Porters Spring Ball at the Marcliffe at Pitfodels. The evening event raised money for CLAN Haven to help cancer patients from Orkney and the Shetland Isles. Many Orkney based companies provided free food or at a reduced cost so that CLAN Haven would benefit from more profits from the night.