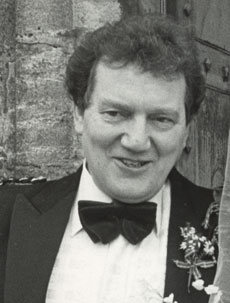 Calum Kennedy was born in 1928 in Orasay in Lewis but grew up in Aberdeen.

He moved to Glasgow when he became an apprentice plater at John Brown's on Clydeside. Three months later he enrolled at Glasgow University to study to be a doctor. Calum left after 10 months and became an accountant for a short time. He then joined the army for four years. During his time in the forces he sang in his spare time and when he left his sister encouraged him to enter the local Glasgow MOD competition, which he won. This lead to Calum Kennedy entering the National MOD competition where in 1955 he won the Mod Gold Medal at the Aberdeen Music Hall. The Queen Mother and Princess Margaret were in the audience. This lead to performances in London and Calum Kennedy started on a successful career as a famous Gaelic and Scottish singer who appeared on many television programmes and shows.
Calum Kennedy was affectionately nicknamed The Golden Voice of the Highlands.

View the range of Calum Kennedy CDs and DVDs.


In 1953 Calum Kennedy married Anne Gillies. She was a fellow singer and they met at the Glasgow MOD. They performed together for many years thereafter. They had 5 children (Fiona, Kirsten, Morag, Morven and Deirdre). Their eldest daughter followed her parents into the singing profession. She is Scottish singer Fiona Kennedy.

In 1957 Calum Kennedy won the World Ballad Championship in Moscow, Russia. He beat 750 other entrants. He received his gold medal from Nikita Khrushchev and went on stage to sing in the Bolshoi.

Calum Kennedy owned the Tivoli theatre in Aberdeen and the Palace in Dundee and would regularly perform in both venues.


Calum Kennedy appeared often on Grampian and Scottish Television. This included his shows Calum's Ceilidh and Round at Calum's during the 1960s and the 1970s. And not forgetting the legendary bus tours around the Highlands called Callum's Commando Courses!

Calum Kennedy released many musical recordings. Some are still available to buy on CD. Such CDs include Legends of Scotland and The King Of The Highlands.

Sadly his wife, Anne, died in 1974 from complications of an operation for gallstones. This tragedy caused Calum to lose his voice for four months.

In 1980 Calum met Christine whilst recording the hymn Amazing Grace for the Songs of Praise TV programme from Dunlop. Christine was singing with the Irvine Operatic Society. Christine and Callum married in 1986 and had a daughter called Eilidh.

In 2005 Calum Kennedy suffered from a stroke. He lived at Cults Rowan Court residential home. Calum Kennedy died on Saturday 15 April 2006 aged 77 years. His funeral was on Friday 21 April 2006 in Glasgow St Columba Church of Scotland on St Vincent Street. His coffin was draped in tartan and a piper played a lament. Hymns were sung and ballads were sung in Gaelic. There were over 200 mourners including fellow Gaelic singer Alasdair Gillies, actor Johnny Beattie and radio presenter Robbie Shepherd who called him The Highland gentleman with the golden voice.


In October 2006 BBC2 broadcast a tribute programme to Calum Kennedy which included footage of an interview with him outside the Music Hall and clips of his performances and ceildihs. It played to his music in the background which included tracks like The Northern Lights of Old Aberdeen, The Road To Dundee, Amazing Grace and Dark Loch Nagar. There was tributes from accordion player Phil Cunningham and Scottish fiddler Aly Bain as well as from friends and fellow performers like The Alexander Brothers, Una McLean, Johnny Beattie, John Carmichael, Alasdair Gillies, Brain Wilson, Robbie Shepherd and Neil Fraser.

A selection of his songs were played against film clips of the Scottish Isles and Highlands, his meeting with the Queen Mother and winning the MOD medal at the Music Hall.

His daughter, Fiona Kennedy, talked movingly about her dad and her fondest memories of his career and his love for her and her mum, calling them the Elizabeth Taylor of the Gaelic World. Family photographs were shared with the television viewers. Fiona narrated the programme.

There was historic film clips shown from The Tivoli Theatre Aberdeen, which Calum Kennedy part owned in the 1960s.

The programme was made by BBC Scotland, narrated by his daughter Fiona Kennedy and produced and directed by Donnie Macleod


Help Needed - Does any reader know the name of the fun song Calum Kennedy sang with Alasdair Gillies on the programme please? If so please e-mail me the answer so that I can update the page. Thank you


A memorial service will be held at a later date in Aberdeen.


The grand-daughter of Calum Kennedy is a famous actor and model, read more about her on the Sophie Kennedy Clark page.