Near Cruden Bay in Aberdeenshire, Scotland are some stunning natural arches eroded into rock faces. These are known as the Bullers of Buchan. This collapsed sea cave still retains some of its roof and though narrow in parts can be walked around. 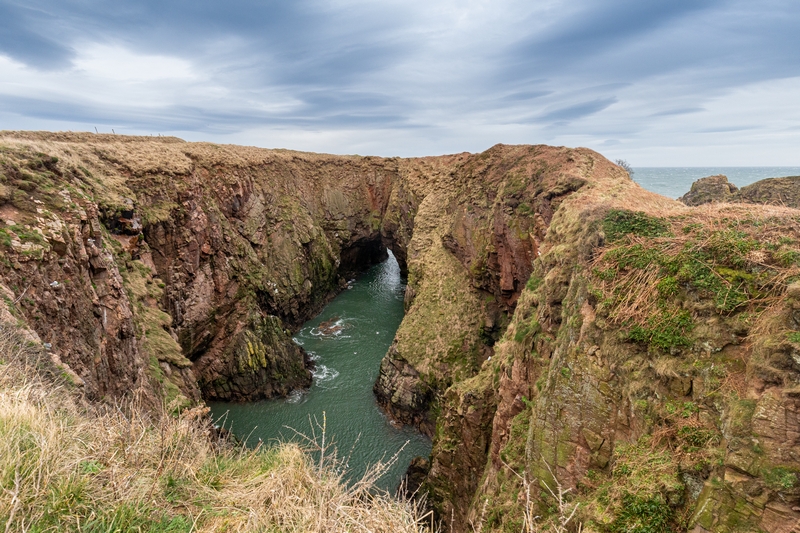 At the extreme point of this circular chasm next to the sea is an area known as The Pot which can carefully be overlooked to show how the rock face earned its nickname. The drops here are sudden and long, so do take care. Children and dogs should be carefully supervised.

Older photos of the Buller's of Buchan including sea views of the Pot can be viewed in the book Old Cruden Bay and Port Erroll: Whinnyfold, Boddam and Buchanhaven

by Jim Buchan. It includes descriptions of the famous visit by Dr Johnson and Boswell and a brief history of the fishing community.


Wildlife and Birds at Bullers of Buchan


Visitors should look out for:


How To Get To The Bullers Of Buchan


From Aberdeen take the A952, passing Ellon and Newburgh. Avoid the first two turn offs to Cruden Bay and take the A975. Look for a car park on the left hand side which is marked with a Bullers of Buchan sign. Park here for free and follow the signs.


There are several traditional fishing cottages by the Bullars of Buchan. One of the outhouses has been converted into a craft shop and art gallery selling photographs and models of puffins seen at the Bullars. There are also wood carvings and woodwork items such as bowls for sale. Contact the owner at:

The Aberdeenshire Council Ranger Service run free guided walks around The Bullers of Buchan. Binoculars are provided and the Ranger will point out birds such as the puffins and other nesting birds. Those attending are asked to wear stout shoes and to bring waterproofs and something to sit on. This event takes place on Sunday 29 June 2008 from 1 to 5pm at the Bullers of Buchan. Contact the Buchan Ranger on 01771 622857 for more information.