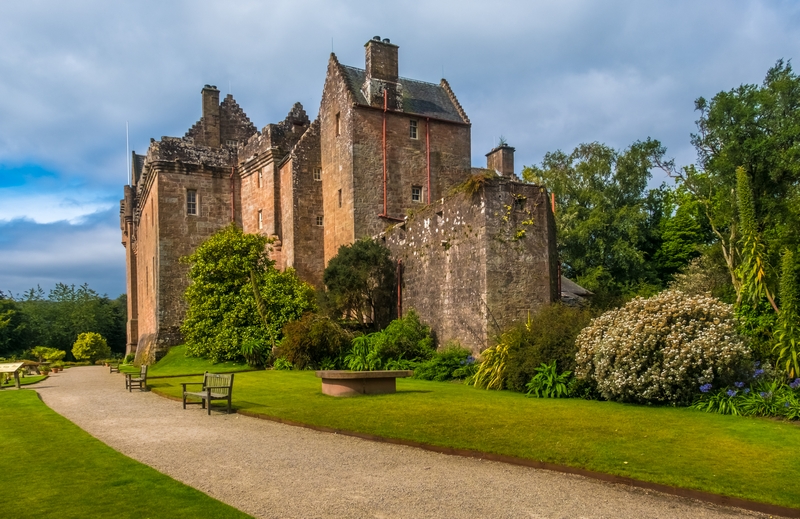 Brodick Castle in the West Coast of Scotland is two miles from the main port of the Isle of Arran and sits at the foot of Goatfell mountain amongst the tall trees. This article will describe the Brodick Castle ghosts and a history of Brodick Castle.


A Grey Lady haunts Brodick Castle and this is thought to be a servant girl from Cromwellian times. She had a love affair with the Captain of the Guard and became pregnant and was then dismissed from service at the Castle. She tried to return to her family in nearby Corrie but they disowned her. Distraught, she went to the Wine Port Quay by the entrance to Brodick Castle and drowned herself. Her ghost haunts the servant areas of the Castle such as the kitchen, lower corridor and the Turnpike stairs which lead to the East Tower and the Battlements. Witnesses have seen her overlooking staff who have been scrubbing the Castle floors as if talking to them. Yet when the witnesses told the staff they denied seeing her standing over them or talking with the Grey Lady Castle ghost.

Other sources think that the Grey Lady Castle ghost was a woman who was locked in the dungeons with two other women and died of starvation. They were locked in the Castle dungeons because they had the Black Death.


In the Castle Library a ghost has been seen. It is the spirit of an old man but no-one knows who he is or why he haunts Brodick Castle.


A White Hart (a Stag) is said to appear in the grounds of Brodick Castle when the Clan Chief of the Hamilton's is about to die.


The History Of Brodick Castle


Brodick Castle is a red sandstone building and the name Brodick is Norse for Broad Bay. An ancient Viking fort is thought to have been on the site. In the 5th century an Irish tribe came across the waters and founded the Kingdom of Dalriada.

Brodick Castle dates back to the 13th century though not as it is seen now. It was built by the Stewarts. In 1406 English troops destroyed the Castle. In 1503 the Earldom of Arran and with it Brodick Castle were granted to Lord Hamilton by his cousin King James IV. A Tower House was rebuilt in 1510 by the new Earl though suffered attacks by the Campbells and the MacLeans. In 1544 the Castle was demolished. It was rebuilt and the parts that were rebuilt in 1588 still exist today. During that era it was owned by the 2nd Earl of Arran, the guardian and regent of Queen Mary. In the middle of the 17th century it was owned by the 1st Duke of Hamilton until his execution in 1648 by Oliver Cromwell during the Civil War. He then placed his garrison of 80 soldiers at Brodick Castle and had it further restored. The 2nd Duke of Hamilton died in battle in 1651.

The Castle remained unoccupied for many years, though the husband of Duchess Anne, William Douglas the 1st Earl of Selkirk who later became the Duke of Hamilton, used the Castle as a base for his hunting trips. It then became a sporting estate until the son of the 10th Duke of Hamilton took up residence.

In 1843 William the 11th Duke of Hamilton married the daughter of the Grand Duke of Baden, the Princess Marie who was the adopted daughter of Napoleon Bonaparte after his marriage to her mother Stephanie de Beauharnais.

Major restoration and building work was undertaken in 1844 and the size of the Castle was greatly increased. The Architect was James Gillespie Graham.

William, the 12th Duke of Hamilton, had no male heirs and his title passed to his cousin Alfred when he died though the Castle was inherited by the 12th Duke's daughter. She married the 6th Duke of Montrose, James Graham in 1906 and became Lady Mary Louise Douglas-Hamilton. This marked the passing of the Castle from the Hamilton family after over 500 years of ownership. She died in 1957 and her daughter, Lady Jean Fforder transferred ownership over to the National Trust for Scotland (NTS) rather than pay death duties. The Castle and gardens then became open to the public. The ghosts of Brodick Castle remain.

Visitors may be able to see the Brodick Castle ghosts and can also view the many examples of period furniture, paintings and porcelain collections. Art collections include the art collection of 18th century author William Beckford of Fonthill whose daughter married the 10th Duke of Hamilton.

Visitors to the Brodick Castle gardens can visit the Ice House, the Walled Garden, the Bavarian Summer House, and enjoy many flowers and plants such as rhododendrons.

In 1977 a hidden staircase was discovered during restoration work. It led to a hidden room deep within the thick castle walls.