Guide to Boddam Lighthouse which is also known as Buchanness with a history and several photographs with information about the Holiday Accommodation: 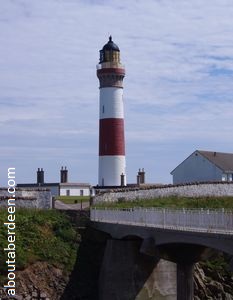 It is situated in a picturesque fishing village, approximately 3 miles from Peterhead and is also known as Buchan Ness or Buchanness Lighthouse. 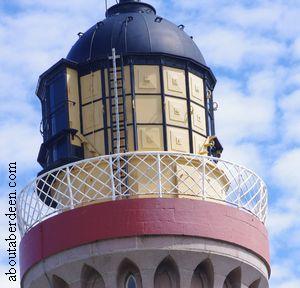 It is another fine example of construction by Scots Engineer Robert Stevenson. It was constructed in 1827. In 1907 its distinctive red band around the middle was added. It was finally automated in 1988 and the keepers cottages were sold. It did not suffer any attacks from enemy planes during The Second World War, instead it twice had mines go adrift on the nearby rocky shore and explode. Fortunately no-one was injured. 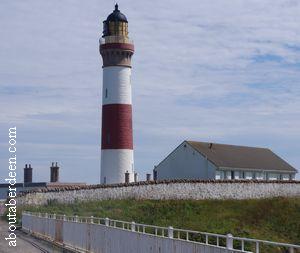 There are several historical photos of it in the book Old Cruden Bay and Port Erroll: Whinnyfold, Boddam and Buchanhaven

by Jim Buchan which includes scenes before the housing developments and shows the Yards, the Coo foghorn, Buchan Ness Lodge and the ruins of the Castle. 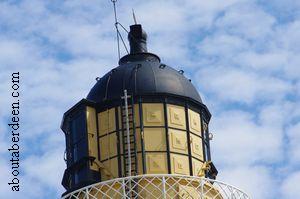 It has a tower height of 35 metres. The light has a range of 28 nautical miles and flashes every 5 seconds.

There is little parking nearby, but it is worth making the effort to drive down to the harbour first where there is plenty of parking. You will be rewarded by a super view of it, cliffs, rugged rocks and the sea. The harbour is still actively used by the local fishermen. 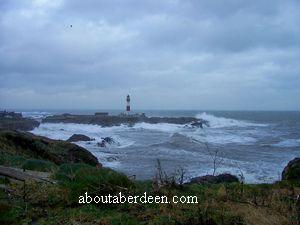 Gordon Morrison has written a book about fishing in this area.
Read more information about him and his book. Gordon provided the photograph in winter to the left with the atmospheric waves crashing into the surrounding rocks. Click on the photo to see a larger image. His book is written in the Doric dialect and he would call it the lichthoose. 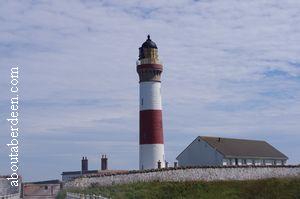 Dog walkers, or those who fancy a stroll along the sea front, can find a lovely walk that is largely unknown, by heading towards the edge of the fenced off fish factory by the sea where a small foot path can be found. Follow this to find a much larger path that takes you up to behind the power station and towards Peterhead. 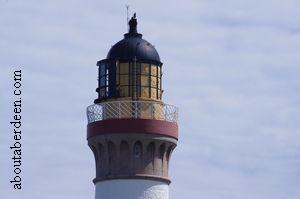 It is not open to the public, but you can stroll around the perimeter. The surrounding cliffs and rocks are a haven to much bird life and you can often see seals bobbing around the sea.

The foghorn was nicknamed the Boddam Coo (cow) and is no longer sounded. It had been installed in 1904 and would give three blasts every ninety seconds. Prior to its installation Boddamers would beat tin basins with spoons to alert sailors in the fog of the coastal hazards (cited in the book Old Cruden Bay and Port Erroll 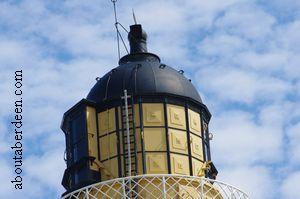 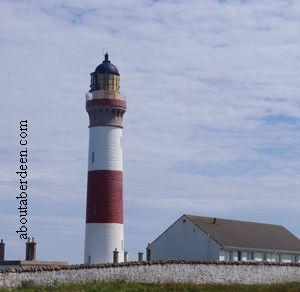 From Aberdeen - Head towards Peterhead on the A952. At Stirling Village take the right hand turn into Station Road. Follow the road, heading down to the sea. Follow the road round to the right at The Sea View Hotel, which takes you onto Harbour Street. You will then be able to see it with its striking white and red colour.

A short walk up Rocksley Drive takes you to a bronze statue of a Royal Air Force serviceman which was built to honour the service of RAF Buchan. Read more about it with photos on the RAF Buchan Statue page.

The Northern Lighthouse Board submitted a planning application to Aberdeenshire Council in the winter of 2011. This was for refittings and modernisation of internal lights which included two LED lights that provide the flash for those at sea currently provided by the rotating light. The original lens carriage and machine case will still be retained but the 1970s lens bullseyes will be replaced. This is in conjunction with conforming to European Union directives that requires mercury to be removed.

The new lights will use less power (about 80 watts) and be seen as a whiter light 18 miles out to sea. It is thought that work will start in the Spring of 2011. 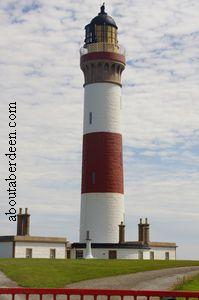 The lighthouse cottages, called Skerry Cottage, have been converted into comfortable modern accommodation by Sheila and Mel Priest who have maintained the traditional look of a lighthouse keeper’s cottage. There are two bedrooms with one having a king size bed whilst there are twin beds in the second bedroom. The lounge has a romantic open fireplace and there is a modern fitted kitchen. The bathroom has a bath and shower. 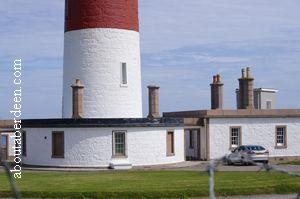 More information about the Boddam Lighthouse holiday accommodation can be found at www.buchannesslighthouseholidays.co.uk where there are some beautiful photographs, including interior shots, and includes pictures of a bride whose wedding was held there.

Her Royal Highness, Princess Anne visited on Friday 8 June 2012 as part of her role as Patron of the NLB. Princess Anne is currently visiting all of the Scottish ones so although this was not an official royal visit she still made time to chat to the Playgroup and Primary School children and retired keepers who lived locally.

This visit was just before the renovations to the structure and lighting. This planning application read: