Auchtavan, the Queen Mother's old cottage, is a rare example of an old ferm toun (Highland clachan) and visitors can get an exclusive opportunity to explore the hingin lum cottage and horsemill building. 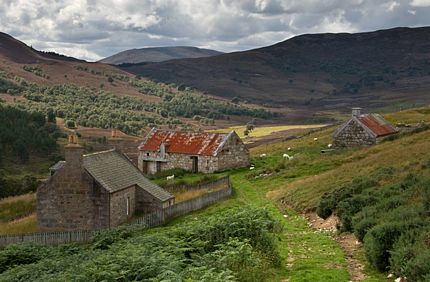 Auchtavan, the Queen Mother's old cottage, is a rare example of an old ferm toun (Highland clachan) and visitors can get an exclusive opportunity to explore the hingin lum cottage and horsemill building.

This scenic area, 450m above sea level, affords some spectacular views over Lochnagar. The cottage was restored in 2008 by Braemar Community Ltd and now visitors can see what life was like over the past 250 years of farming history.
The land here was fertile enough for farming, but eventually life grew too harsh for many of the crofters and farmers here, and the last person left the farms in the mid-1900s.

In addition, on the 26th of August there will be a lunchtime BBQ. Please bring a picnic blanket.

Auchtavan is situated about 6 miles north-east of Braemar. Cars can be parked in the lay-by opposite the turn-off, marked Aberarder. It is then an uphill walk of 2.5 miles to the settlement. The track passes through birch woods and open moorland and can be quite rough, walking shoes and outdoor clothing are recommended. If you cannot make those dates, but are in the are, then do look out for their information boards.

These are free events and no booking is required.

See also the Braemar Castle page to read about its history and ghosts.