Hotel Facilities, Rooms, Book A Room And The Story Of The White Lady Ghost Katherine Ogston 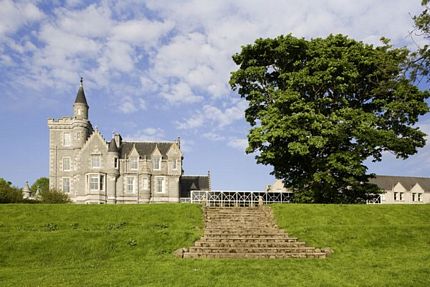 Offer - Dinner, Bed and Breakfast Deal for one night stay.


The Mercure Ardoe House Hotel Aberdeen & Spa dates back to 1878 when the house was built for Alexander Ogston and his family. Ardoe House is a fine example of a 19th century castellated mansion house. The house was built incorporating many design features inspired by nearby Balmoral Castle. Blended in the modern facilities are the historic wood panelling, grand staircase and fireplaces. Ardoe House was later sold and converted into a Hotel in 1947 and lovelying added too over the later years to make Mercure Ardoe House Hotel and Spa what is is today.


There are 109 bedrooms, 5 function rooms, private dining and an 18 meter indoor heated pool with fully equipped gym and sauna with treatment rooms at Mercure Ardoe House Hotel and Spa in Aberdeen.

Christmas Events at Mercure at Ardoe House Hotel and Spa.

Because of its fairytale castle look it is popular for weddings. The architecture was inspired by Balmoral Castle. The hotel function rooms can cater for 60 - 500 guests.

For the more active there are tennis courts, fully equipped gyms and an aerobics studio.


The Blairs Restaurant is open to Hotel guests and the public as is the adjoining Soapies Lounge Bar. The award winning chefs have won the Hotel aa double AA rosette.

The Ghost Of Ardoe House Hotel

The Hotel has a white lady ghost who is thought to be Katherine Ogston, the wife of Alexander Milne Ogston who was a soap merchant, who purchased the mansion house in 1839. There is a portrait of Katherine on the main stairs and this is where her ghost has been seen.

Others have reported that the ghost is a daughter of a former owner who was raped and became pregnant. She later killed herself and her child.


How To Get To Ardoe House Hotel At Blairs

From Aberdeen take the A93 and go across the Bridge of Dee. At the roundabout take the 3rd exit onto the B9077.

Book a room or restaurant table at Ardoe House Hotel or other Macdonald Hotels and restaurants and see the latest discounts and late room booking offers.

The Macdonald Hotel Group were the former owners of the Ardoe House Hotel Aberdeen.