Reviews of the cake shops and bakeries of Aberdeenshire and where to buy speciality cakes, confectionary and delights such as black bun, butteries, gamrie knotties, ginger slab, Scottish shortbread and more tasty homemade delights from Scotland: 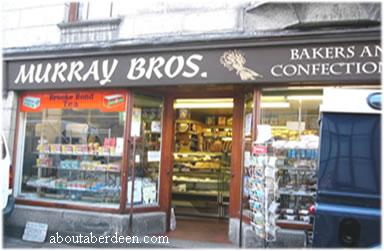 Murray Brothers Bakers can be found in Main Street Gardenstown on the North East coast of Aberdeenshire, Scotland. As you can see in the photograph to the left they are a traditional family run Scottish bakery who bake local delights such as butteries, ginger slab, oatcakes, butter biscuits, currant loaf and Scottish shortbread as well as popular bakes like cherry cake, meringue baskets, carrot cake and a variety of fresh loaves and rolls. Other delicious cakes include banana cake, apple cake, a variety of fruit cakes, date and walnut cakes, strawberry tarts, scones and fresh cream cakes.

Seasonal bakes include black bun and puddings during Christmas and Hogmanay, Easter cakes, hot cross buns, and a wide range of wedding, birthday and anniversary cakes to suit individual requests.

One delicious homebake that can only be found in Gardenstown is the Gamrie Knotties which takes its name from the sandy bays in the area which are known locally as Gamrie or Gaineamhach. This sweet biscuit is made with ginger and has a hard sugary coating. It also has several varieties such as gamrie stollen and gamrie bannock.

Their bakers provide wholesale delivery throughout the local area and also provide event catering services such as church annual picnics and funerals. They also have two delivery vans and deliver their fresh bakes to outlets such as shops, businesses, sandwich shops, cafes, butchers, supermarkets and even trawlers and fishing boats. Areas include Fraserburgh and other towns and villages of Grampian.

All items are freshly baked and the shop is open Monday through to Saturday from 8am until 5pm.

The first bakery was opened at 108 Main Street in Gardenstown and run by William Murray from the year 1874. It was purchased from the Chalmers family. He later moved to Inverness and after his son, also William, was born the family moved back to Gardenstown. They later moved to Mallaig to run a bakers shop near the harbour and in the 1920s moved back to Gardenstown. It has been handed down from father to sons and other generations have expanded the family business which include William and James Murray buying two houses that they knocked down and had built a purpose built bakery and shop. In the 1960s the bakery shop was handed over to the brothers Bill and Douglas who extended the business in the 1980s. A few years later Douglas’ sons, Kevin and Steven worked for the family business.

They featured in the reality TV series The Baron of Troup where the celebrities had to help in the baking of the products.


Directions from Aberdeen: Take the A90 out of Aberdeen City towards Ellon. At the Peterhead and Fraserburgh junction take the A952 towards Fraserburgh and at Mintlaw take the B9093 to New Pitsligo and then turn off to the A98 to Banff and Macduff. Look for a turn off to the minor road of the B9031 and follow this until you see the right hand turning sign posted for Gardenstown onto the B9123. Follow the main road down past the public hall and the church. Before you turn right to go down to the harbour turn left onto the Main Street where you see the bus stop and public phone box. It is opposite the Garden Arms Hotel. Car parking is available outside the bakery but is limited because the historical area was built at a time when car ownership was limited. Far better to use the free car park at the harbour and walk up and build up an appetite!

If you would like your Aberdeenshire bakery or cake shop listed on this page for free then please contact me.